Hitting the Pause Button: The "Frozen Conflict" Dilemma in Ukraine 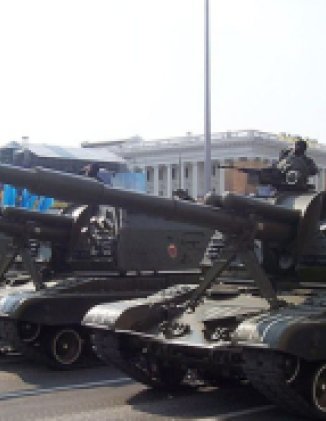 For some time, Ukraine is likely to host frozen conflicts, in Crimea and the Donbas region. Elections last Sunday in the Russian-armed, rebel-controlled areas of eastern Ukraine reinforced this. Moscow said the vote reflected the "will of the people," but the European Union called the elections "illegal and illegitimate." Ukraine will face difficult realities and painful choices in managing its conflicts. Georgia's experience with frozen conflicts in Abkhazia and South Ossetia offers lessons for Ukraine.

“Frozen conflicts” describe places where fighting took place and has come to an end, yet no overall political solution, such as a peace treaty, has been reached.

There are key differences between the Georgian and Ukrainian conflicts. First, in the Georgian ones, both sides played a role in provoking fighting. After the Soviet collapse in 1991, Russian forces supported separatist Abkhazia and South Ossetia in part to stem Georgian armed efforts to subdue the two regions. In 2008, Georgians used force precipitately in South Ossetia after Russia’s provocation. In contrast, Russia’s seizures of Crimea and parts of the Donetsk and Luhansk regions were unprovoked by Ukrainian military action.

Second, in its 2008 invasion of Abkhazia and South Ossetia, Russia incurred Western criticism, but no lasting ill effects. In contrast,  its seizure of territory in Ukraine, breaking explicit international commitments, has led to tough Western sanctions. They are exacerbating capital flight from Russia, an economic downturn and international isolation. These effects may not be alleviated anytime soon.

Third, Russia justified its 2008 intervention in specific terms: preventing Georgia from committing alleged genocide in the separatist regions and avenging the deaths of Russian peacekeepers. Moscow depicts its actions in Ukraine, however, as serving a broader goal, to protect ethnic Russians and Russian speakers abroad wherever they may be endangered. Buttressing this strategy, Russia is waging a nationalistic propaganda campaign alleging that the United States and the West seek to overthrow governments through rightist-led color revolutions.

Despite these differences, aspects of Georgia’s and Ukraine’s frozen conflicts are similar.

Like Georgia, Ukraine became more vulnerable to Russian pressure because of bad governance and poverty. Despite being fledgling democracies, the two countries have per capita GDPs less than half that of Russia. People in the occupied regions see material cost in staying with Georgia or Ukraine. When Russia seized Crimea, some older people there exulted to journalists that their pensions would rise.

To entice people in the occupied areas, Ukraine must become more prosperous. This means privatizing state-controlled economic property and slashing wasteful subsidies and regulations that feed corruption and stifle business opportunity. Without progress, support for Ukraine will decline. Western patience with stalled economic reforms, and sky-high corruption and energy inefficiency, is wearing thin.

After the 2003 Rose Revolution when Mikheil Saakashvili became president, he played to excess the nationalist card, alienating many of Georgia’s supporters in the West. He often lambasted Russia’s leaders and policies, despite Western counsel that this tiresome refrain ran undue risks for Georgia. Saakashvili’s tactics may have helped egg on Russia to ban wine and others imports from Georgia, freeze high-level dialogue and set the stage for the 2008 war.

Political leaders of the several hundred thousand persons displaced from Abkhazia and South Ossetia pressed Georgian leaders to pursue strident anti-Russian policies and wage insurgency against the occupiers. This pressure sometimes skewed Georgian policies in unhelpful directions. The United Nations High Commissioner for Refugees estimates that over 400,000 persons displaced from occupied zones in Ukraine are residing elsewhere in the country. The new government must maintain focus on reform and security and not jeopardize this by succumbing to strident politics.

Be cautious when it comes to ceasefire arrangements:

After the 2008 invasion, European Union and French president Nicolas Sarkozy negotiated with Russian and Georgian leaders a “provisional cessation of hostilities.” Russia violated it, however, by seizing additional Georgian territory beyond the previous perimeters of Abkhazia and South Ossetia. Armed occupiers are encroaching further, moving fence lines. Moscow now proposes a treaty with Abkhazia that would all but incorporate it into Russia.

The Minsk Protocol reached in September, under the auspices of the Organization for Security and Cooperation in Europe, between Russia, Ukraine and the Russian-backed separatists from Donetsk and Luhansk, is unlikely to fare much better than the Georgian ceasefire. Russian forces and rebels continue to wage war, albeit at a lower level. The elections last Sunday violated the Protocol’s promise of early elections in occupied regions under Ukrainian law. Other Protocol pledges—such as OSCE monitoring of the Ukrainian-Russian border and withdrawal of “illegal armed groups”—may not be fulfilled.

Recognize that Kyiv has no writ in occupied areas:

This winter, the occupied areas in Ukraine will face severe economic conditions. Leaders in Kyiv will want to help suffering citizens. Armed rebels, however, would seize any aid Kyiv sent and monetize it for their own purposes. Like Abkhazia and South Ossetia, the occupied areas of Ukraine will become poles of corruption and criminality. Ukraine should protect itself from this threat. At the same time, it ought to reduce the risks of new tensions by providing, at market prices, vital support services to the occupied areas, such as electricity and water. And Kyiv needs to continue person-to-person contacts and encourage the work of NGO’s in eastern Ukraine.

Do not expect much military help from the West:

In the six years since the Russian invasion of Georgia, the West has yet to supply it with significant defensive weapons, such as anti-armor and anti-air. Despite President Petro Poroshenko’s eloquent plea to a joint session of the U.S. Congress in September for such weaponry, Washington has yet to approve it. Like Georgia, Ukraine will have to acquire it from others. Contrary to their deterrence strategy for NATO allies, Western leaders seem to believe that arming Georgia and Ukraine would provoke, rather than help deter, Russian aggression.

Look to Georgia as a model for improving the business climate:

Substantial economic aid from the International Monetary Fund and the West is flowing to Ukraine, but sustaining it will require more reform. In one area – the quality of the business climate -- Ukraine ought to look to Georgia’s example. The World Bank’s most recent Ease of Doing Business index ranks Georgia near the top, 15th place out of 189 countries. Ukraine languishes in 96th place. Saakashvili’s anti-corruption reforms did much to catapult Georgia to a rank that exceeds even Canada.

The 2008 Russian-Georgian war demonstrated that frozen conflicts can become hot. Russia’s renewed military buildup near Ukraine and its dispatch of military supply convoys to the separatist areas underscores that the frozen conflicts in Ukraine will likely be unstable. Russia may even seek to seize more Ukrainian territory to create a land bridge to Crimea.

Ukraine must look first of all to its own resources to deal with its crises. International support in key areas, however, will be critical: financing of reforms through the European Bank for Reconstruction and Development, the IMF, the World Bank and the EU; coordinated efforts aimed at influencing Russia’s strategic choices; and diplomacy to discourage international acquiescence to Russian aggrandizement in Ukraine. To sustain this support, Ukraine’s new president and parliament should lose no time in moving toward a reform course.

Given the pressure from Western sanctions, falling oil prices, the declining ruble and capital flight, Russia will be hard pressed to provide much aid to Crimea and eastern Ukraine, where war damage is substantial. Over time, Ukraine’s best strategy for recovering these beleaguered regions will be to improve its economy and governance, and strengthen productive linkages with the West and other neighbors.

Adjunct senior fellow at the nonprofit, nonpartisan RAND Corporation and a former U.S. ambassador to Georgia and Kazakhstan