Mediating the Vietnam War: Romania and the First Trinh Signal, 1965-1966 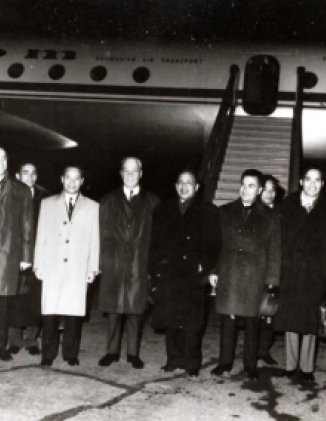 Mediating the Vietnam War: Romania and the First Trinh Signal, 1965-1966

To read the full paper, please download it here.

This Working Paper examines Romania’s lesser-known early mediation during the Vietnam War and its contribution to the “Trinh signal” of January 1967, commonly considered the first real breakthrough in movement towards peace talks.  The Working Paper explains how and why the Romanian approach differed from that of other Warsaw Pact intermediaries, and why those differences resonated with the North Vietnamese leadership. Watts suggests that Romania’s mediation during 1965-1966 was far more significant, consistent and influential than previously thought, setting the stage for its more spectacular role as Washington’s principle channel to Hanoi in the autumn of 1967 and contributing to the overwhelmingly positive impression of its efforts by the Johnson Administration.

Since 2011 Larry L. Watts has teaching Cold War and Intelligence studies at the University of Bucharest. Prior to that he was security sector reform advisor to Romania’s National Security Adviser, Police General Inspectorate, Defense Ministry, Foreign Intelligence Service and Senate Defense Oversight Committee. He has been officially recognized for promoting military reform and NATO integration, implementing democratic oversight, promoting ethnic reconciliation, and fostering Romanian-American relations. He also served as senior consultant to the Princeton-based Project on Ethnic Relations during 1991-1997 and continues to be involved in ethnic mediation efforts. Watts has lectured at the State Department's Foreign Services Institute, the National Intelligence University, Romania's National Defense University and Military Technical Academy, the Dutch National Military Academy, and various other universities and institutions in the United States and Europe. He is the author of With Friends Like These: The Soviet Bloc’s Clandestine War Against Romania (2010); Extorting Peace: Romania And The End Of The Cold War, 1978-1989 (2013); andIncompatible Allies: Romania, Finland, Hungary And The Third Reich (2014). He is currently working on his forthcoming book on mediation in the Vietnam War as well as the third volume of his Cold War trilogy and a volume on post-1989 intelligence service reform in Romania.