A New Agenda for a New Ukraine: Political, Security, and Social Dimensions 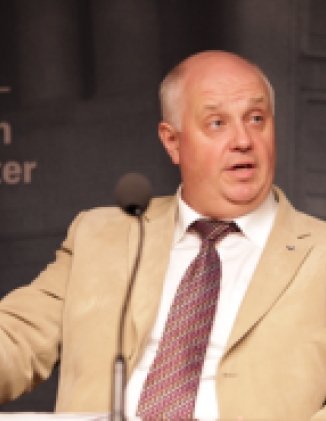 “Ukraine’s ‘invisibility’ makes it very hard for it to communicate with the rest of the world,” said Kennan Kyiv Office Director, Dr.Yaroslav Pylynskyi, at a July 15, 2014 lecture at the Kennan Institute. Ukraine’s relative isolation as well as its dependence on neighbors who until recently were friendly help explains its inability to defend itself.

Pylynskyi argued, however, that the way forward for Ukraine now does not depend on external intervention, but rather comprehensive reform of governance. These reforms, he stated, must start with a basic decision about what direction Ukraine should take, pointing out that “now is the best time to think about what country Ukrainians want to have and to build – and how to rule this country.”  Unlike the founding fathers of the United States who required decades of debate and conversation to arrive at the structure they wanted, Ukraine has good examples near at hand to emulate. Poland and Israel both created democratic structures to govern themselves effectively and share historical and cultural bonds with Ukraine that would make the process of imitation easier.

Citing the strong local self-governance of local authorities found in Italy in the 1970’s, Pylynski contended that the best reforms for Ukraine would devolve administrative powers to local leaders closer to their communities’ issues and needs. Soviet-style tax collection, funneling local revenue through Kyiv before redistributing it to the regions and then towns was one of the main impediments to competent local development and improvement. “Municipal authorities and businessmen have little incentive or ability to develop their communities when they would see little to no return on such efforts,” according to Pylynskyi.

On the national level, the biggest obstacles are monopolies of state power, the worst among them state control of enterprises and assets. As with taxation and court reform, he argued, ownership of property and land needs to be decentralized to reduce bureaucratic friction and state paternalism.

Ultimately, Pylynskyi admitted, there will be no panacea for Ukraine. Even high-quality legislation already on the books has proven insufficient when not enforced. Nothing short of total systemic change, then, can bring Ukraine forward onto a path of improvement and democratization. Soon enough, he said, it will be clear if the new leaders “really build a new successful country – or if they do the same thing as in the times of Kuchma, Yushchenko, and Yanukovych.” There is one bright spot though: Pylynskyi pointed out that when Yushchenko came to power, people were naïve and expected one man to fix the whole system. Now, he said, Ukrainians have woken up and know that real change depends on them.