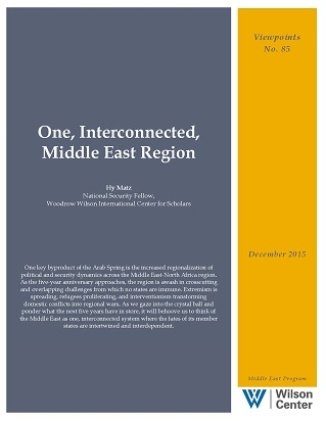 December 17, 2015 will mark the five-year anniversary of the start of the Arab Spring. On that fateful day in 2010, Mohamed Bouazizi lit himself on fire in a small city in central Tunisia. Within just two months, countries across the Middle East and North Africa (MENA) region were engulfed in mass protests. Within a year, four previously unimpeachable MENA leaders were toppled. The transnational diffusion of these protests was as quick as it was powerful.

During the early days of the Arab Spring, the rapid diffusion of protests generated intense hype. Rarely has the world witnessed a protest movement that swept across state borders so rapidly. For those trying to make sense of the dizzying scope of the unrest, explanations rooted in pan-regional similarities had an understandable appeal. In many ways the extensive unrest was easier to comprehend in the context of one regional rebellion rather than concurrent uprisings across a wide swath of MENA states. Marc Lynch, in his 2012 book The Arab Uprising, described the protests as “A single, unified narrative of protest with shared heroes and villains, common stakes, and a deeply felt sense of shared destiny… The unified Arab world of which generations of pan-Arab ideologues had dreamed had never felt more real.”

However, once states’ experiences with the Arab Spring began diverging, conversations about the region’s robust interconnectivity ebbed. Some protests succeeded in toppling autocrats, while some autocrats succeeded in defanging protests. Naturally, this dissimilarity attracted significant attention within the community of Middle East watchers. In lieu of discussions about the linkages binding states together, the focus turned to better understanding the distinguishing characteristics that set states apart.

During the past few years, scholars have made tremendous advancements toward understanding the variation in MENA states’ experiences with the pressures unleashed during the Arab Spring. Experts have demonstrated that there are a variety of traits that help explain this variation, including differences in their internal succession processes, their comparative oil resources, and the relative institutionalization of their security services.

However, as we near the fifth anniversary of the Arab Spring, we should not let such cross-national differences skew our analytic focus on the profoundly regional nature of the phenomenon that was the Arab Spring. The critical importance of pan-regional forces to individual states’ domestic stability and political outlooks did not end after the mass protests petered out. Instead, they have only continued to grow more and more important. For as the protests morphed into armed conflict, those conflicts ushered in a new array of difficulties that spread from state to state. Five years since Bouazizi lit himself on fire, the region remains awash in various forms of instability spillover. Extremism is spreading, refugees proliferating, and interventionism transforming domestic conflicts into regional wars. In addition, arms are flowing across porous state borders and economic symptoms from the conflict zones are damaging the vitality of the entire region. In short, the interdependencies between MENA states are mushrooming. In the contemporary Middle East, there are few major developments that do not have sweeping implications for states across the region.

Consider the spread of extremism. Through its actions in Iraq and Syria, the Islamic State of Iraq and the Levant (ISIL) has demonstrated that state borders cannot contain organizations, movements, and ideas that operate on a pan-regional arena. ISIL leader Abu Bakr al-Baghdadi’s declaration of the return of the Caliphate, with himself as Caliph, for “all Muslims everywhere” highlights his regional orientation. Baghdadi’s vision of one united Muslim World taps into an undercurrent of pan-regional communal affiliations and aspirations, the same undercurrent that, in a different fashion, fueled the rise of former Egyptian president Gamal Abdel Nasser and the Pan-Arab Nationalist movement in the 1950s.

As foreign fighters have spilled into Iraq and Syria, the ISIL franchise has spilled out across the region. Groups in ten MENA states have pledged allegiance (bay’ah) to ISIL; ISIL has declared provinces (wilayat) in seven MENA states; and ISIL has staged lethal attacks in ten MENA states, not to mention its attacks beyond the region. Although most ISIL affiliate groups existed in some capacity before they pledged allegiance to ISIL, their professed relationships with Baghdadi’s vision and cause transforms the nature of the threat environment. The growth of ISIL’s affiliate groups guarantees that the ISIL crisis is one with which the entire region is forced to struggle.

Alternatively, consider the foreign interventionism recently exhibited by MENA governments. In each of the region’s four active civil wars—Iraq, Libya, Syria, and Yemen—external governments have stepped in with a military hand, either through direct intervention or indirect support to their proxies. Although each of the four civil wars originated in domestic problems and strife, it was not long before they became proxy wars for other regional and international powers.

This foreign interventionism often worsens the problems in those countries experiencing civil war, amplifies the risk of destabilizing spillover into the neighbors of the war-torn countries, and sometimes introduces new problems at home for the intervening countries themselves. The trend toward greater interventionism among MENA states, then, leads to greater regionalization of otherwise domestic conflicts and deepens the degree to which regional states are affected by problems occurring outside their national borders. And in the charged geopolitical atmosphere so rampant across the MENA region today, it is almost impossible to imagine a conflict breaking out that does not compel other regional powers to intervene.

Lastly, consider the transnational ties being developed by the region’s sweeping refugee crisis. The crisis, which has now reached historic proportions, ensures that there will be a robust tie for generations to come between states from which refugees are fleeing and those in which they are seeking refuge. By the end of 2014, MENA countries were hosting roughly 5.5 million refugees, nearly double the number they were hosting in 2010, according to UN figures.[1] The conflict in Syria in particular has levied massive new constraints on its immediate neighbors. Turkey is now host to the world’s largest refugee population (1.59 million, as of the end of 2014), while Lebanon and Jordan have the world’s most refugees per capita (232 and 87 refugees per 1,000 citizens, respectively). In these states, the refugee crisis has amplified sectarianism, imposed greater resource constraints, and generated new pressures on state governments, further illustrating the degree to which external problems can quickly become internal challenges for states across the MENA region.

As the anniversary season for the Arab Spring nears, there will undoubtedly be much debate about its legacy. What sabotaged the hopes for positive political change that defined the heady days of early 2011? Is the region reentering another era of renewed authoritarianism? How long will the violent tumult last? One less controversial but equally important byproduct of the Arab Spring is the increased regionalization of political and security dynamics across the MENA region. As we gaze into the crystal ball and ponder what the next five years have in store, it will behoove us to think of the Middle East as one, interconnected system. A system where instability flows effortlessly across state borders, but also one where a single fruit vendor’s act of revolt can spawn an uprising where the calls for change on the streets of Tunis are almost indistinguishable from those shouted in Cairo, Tripoli, Sana’a, and beyond.