Skip to main content
Support
Show
Streaming
Preparations and Challenges Ahead of Brazil's 2022 Presidential Election
Explore More
Close
Blog post
Migration
Over Half of African Young Adults Are Likely to Consider Leaving Their Native Country
By Ambassador Mark Green on July 5, 2022
Share on FacebookShare on TwitterShare via Email
Share
Part of the Africa Program Publications
Publication 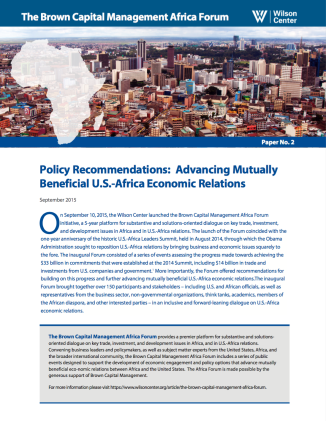 On September 10, 2015, the Wilson Center launched the Brown Capital Management Africa Forum initiative, a 5-year platform for substantive and solutions-oriented dialogue on key trade, investment, and development issues in Africa and in U.S.-Africa relations. The launch of the Forum coincided with the one-year anniversary of the historic U.S.-Africa Leaders Summit, held in August 2014, through which the Obama Administration sought to reposition U.S.-Africa relations by bringing business and economic issues squarely to the fore. The inaugural Forum consisted of a series of events assessing the progress made towards achieving the $33 billion in commitments that were established at the 2014 Summit, including $14 billion in trade and investments from U.S. companies and government.

More importantly, the Forum offered recommendations for building on this progress and further advancing mutually beneficial U.S.-Africa economic relations. The inaugural Forum brought together over 150 participants and stakeholders—including U.S. and African officials, as well as representatives from the business sector, non-governmental organizations, think tanks, academics, members of the African diaspora, and other interested parties—in an inclusive and forward-leaning dialogue on U.S.-Africa economic relations. See below for the full summary of recommendations.