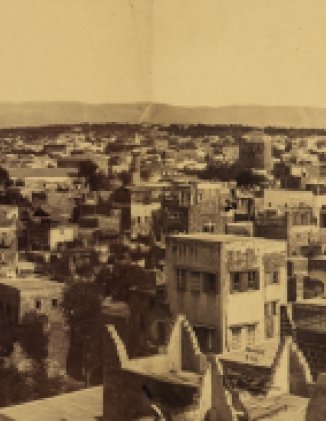 Malinkin: During your grant you have been researching what the Middle East meant to the Russian Empire – particularly in social, cultural, and political terms – what have you discovered?

Du Quenoy: I’ve continued to read a lot of diplomatic documents from Russian consuls and ambassadors in the Middle East discussing what they were doing there. The more I examine them, the more it seems that Russia was trying to be a disinterested partner in the region during imperial times and also trying to build pro-Russian constituencies in the region among any group of people who seemed remotely sympathetic. There were continual Russian consular and general diplomatic initiatives to try to bring people into line with what Russia was thinking generally. And they were doing this in “soft power” terms much like we see today around the world, including Russia in the Middle East, ironically.

What I found to be most significant was what the Russians were doing in places like Syria and Palestine, where they were building not just diplomatic ties but also cultural and educational ties through school systems and religious endowments. There was also a Russian ecclesiastical mission in Jerusalem, which was trying hard to create an atmosphere where Russian pilgrims could travel and also to get local Arab populations to be on their side geopolitically. I also found that in places like Egypt and Morocco, there were Russian diplomatic missions arriving for really no particular reason other than to create constituencies that believed in the disinterestedness of Russian power. The diplomats would receive instructions to meet the local ruler and try to impress upon him the majesty of Russian power, the breadth of Russia’s interest in the region and in Muslims, and convince him that Russia was a true friend.

In what ways is current Russian policy towards the Middle East rooted in the past?

A lot of the people who design these policies, like Evgeny Primakov, the former prime minister of Russia, are trained Arabists so these are people who would have had at least some awareness of their country’s relationships historically. If you look at a lot of the Soviet era publications on imperial Russia in the Middle East – documentary collections or academic articles – they almost always bring out this idea that Russia had a long-standing relationship with the people of that part of the world as a benefactor, as a friend, as someone who could be relied on in a crisis, and I do think that informs how they think today. The people making policy are likely more engaged with immediate problems, but these are all people who were educated in the diplomatic academy and probably have a pretty pronounced sense of what the Russian Empire’s history was in the region. I can tell you that at the Russian cultural centers in Beirut and in Cairo where I have been teaching the last eight years, there is a lot of interest in the imperial era and they have sponsored a lot of publications about the Russian schools in Palestine and Syria.

In what ways does the Russian government try to engage with the Middle East – be it on a political, economic, or cultural level?

I think they do them all, and obviously the strategic and political levels are big for them as is economic engagement. The price of oil internationally is of great concern to the Russians – it’s one of their major export commodities and keeping the price high is a big deal. The arms market is also a big deal – arms exports are now a state monopoly in Russia with the funds going directly to the government. The figures from arms are not as huge as from oil, but still significant. In terms of cultural engagement, cultural contacts go a long way toward impressing upon the societies that the Russians really do care. Russia often sends some of its performing companies on tour in the Middle East. For example, the Helikon Opera from Moscow usually comes to Beirut every year. Russian cultural centers throughout the region offer Russian language and ballet classes. There’s a lot of outreach from the Russian cultural centers not just to the Russian communities that live in those regions, but also to the societies at large.

How would you describe Russian attitudes toward Middle Eastern societies today – in general - and also if you could give a few country-specific examples?

On the one hand there is a rise in xenophobia and racism within Russia, particularly directed against Muslims who live in the Russian Federation – the wars in Chechnya created a lot of this animosity. But when the Russian political establishment deals with Middle Eastern countries it seems to act a lot like it did in imperial times – often giving them broad diplomatic and even military support. The most obvious example today is Syria where you see Russia providing vigorous diplomatic defense of Bashar al-Assad’s regime in the United Nations and also supplying Syria with lots of military hardware to crush the rebellion. They have various reasons for doing that including the obvious strategic assets they stand to lose should Assad fall – in particular, their naval base. It’s the only remaining naval base that the Russians have outside the former Soviet Union, so losing that would be a significant blow, at least in their minds. At the same time, a lot of these countries, including those with regimes that were overthrown, had offered things like oil contracts, military base rights, arms markets, and other agreements that were definite assets to Russia economically. It also becomes a question of international prestige because Russia has already lost a number of other clients in the region. If it loses its last two – Iran and Syria – then Russia’s really going to be in trouble, even devoid of influence in the Middle East. They’ll look weak both internationally and to their own population.

Has your research yielded any insights about the kinds of goals or sensitivities Russia has traditionally had in approaching major social and political change in the Middle East?

Generally speaking, during imperial times Russia was interested in having a way of accessing the Middle East that didn’t involve military confrontation for the good reason that they always lost. The western powers would work together to make sure Russia couldn’t realize its goals – either through direct confrontation, like in the Crimean War, or through more diplomatic means, like the Balkan Crisis in the 1870s. The big conflagration in 1914—though not specifically about the Middle East—was about the disintegration of the Ottoman Empire and what would happen to those lands and societies thereafter. Russia was certainly interested in building constituencies and trying as much as possible to look like it was not an imperialist power in the region and disinterested in expanding its role in a general sense of independence. Today, Russia sees the Arab Spring as a threat because not only is it toppling regional allies and clients, but it seems to be an example to some of the Russian protestors who have used some of the very same methods and technology to organize the protests in Moscow. If the Russian government looks at Egypt, Tunisia, Yemen, or, now, Syria, they are afraid of what could happen in Russia. The effects have been a lot less devastating in Russia, but still, the idea that there could be a popularly organized opposition using communication channels outside of state control is a big threat to any managed democracy, whether it’s Mubarak’s Egypt or Putin’s Russia.