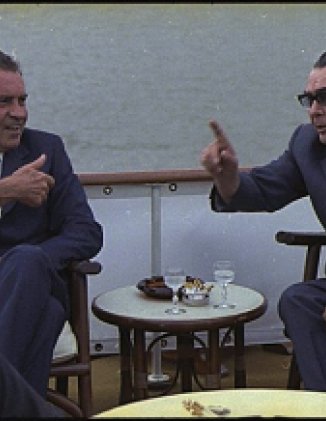 CWIHP e-Dossier No. 31 [Click to view the document in CWIHP's online Digital Archive]

Relations between Israel and the Soviet Union during the latter half of the 20th century were akin to those between two porcupines trying to make love in the dark. While both sides wanted at times to consummate their shared desire for rapprochement, these attempts always ended with mutual pain and humiliation.

Israeli-Soviet relations enjoyed a brief honeymoon when the state of Israel was established in November 1947. At that time the Soviet Union voted in the U.N. for the creation of an independent Jewish state and its representative to the U.N., Andrei Gromyko, spoke eloquently about the Jewish right to have a national home. When the Jews in Palestine found themselves struggling against numerous Arab armies in the war of 1948, Moscow authorized Czechoslovakia to sell arms to Israel and assented to the migration of Jews from Eastern Europe to Israel. The infusion of weapons and manpower proved crucial to Israel’s eventual victory.

That proved to be the pinnacle of these relations which afterwards markedly deteriorated. While Israel tried to maintain a neutral position in the Cold War during the early 1950s to curry favor from both superpowers, the Korea War called that bluff. When explained by the State Department that a refusal to stand up and be counted would terminate the flow of American aid and Jewish contribution, the Israeli government declared its support for the American campaign in Korea. From that point onward Israel’s pro-Western stance became more and more vocal. The ensuing military and civil aid which flowed to Israel from Western Europe and the U.S. came with a heavy price: The Soviet Union refused to allow Jews living in its territory to leave the country. While not all Soviet Jews wanted to emigrate to Israel, it was expected that given the choice, many of them would. To make things worse, Moscow aligned itself with the radical Arab regimes and, ever since 1955, lavished them with weapons and soft loans. These regimes were, at least publically, committed to the liquidation of Israel; a stance which led to several wars and numerous border skirmishes between Jews and Arabs. These were the reasons for the tense and uneasy relations between Tel-Aviv and Moscow.

Nevertheless, as bad as relations were throughout the Cold War, the dialogue between Israel and the Soviet Union never stopped even after formal relations were severed following the 1967 June war. Israel was always hoping that it could somehow convince Moscow to open the gates to Jewish immigration while the Soviet Union aspired to become an ‘honest broker’ between Jews and Arabs mainly because it wanted to ensure that its regional Arab allies would not drag it to a confrontation with the U.S. By the early 1970s, the Soviets were also increasingly interested in improving their relations with Washington and were afraid that the Jewish lobby would interfere by protesting against Soviet immigration policy. For these reasons, the Soviets wanted to start a dialogue with Jerusalem.

The document at hand represents yet another attempt at reaching tacit understanding between Tel-Aviv and Moscow. It records a meeting that took place in mid-June 1973 between Mordechai Gazit, General Director of the Prime Minister’s Office, and Victor Louis, a Soviet journalist with shadowy connections to the KGB.[1] Louis arrived in Tel-Aviv a week before a crucial summit meeting between the American President, Richard Nixon, and Soviet Chairman Leonid Brezhnev. Louis already knew that the Middle East would be one of the most important topics discussed during the summit and insinuated that if Jewish-American organizations would ruin the event by demonstrating for free immigration of Jews from the Soviet Union, Brezhnev might close the spigot altogether (tens of thousands Jews were allowed to immigrate each year as a Soviet gesture that came in response to Nixon’s détente policies). Louis explained the Soviet Union’s immigration policy and also came up with a few ideas to improve Israeli-Soviet relations. He also exposed, perhaps inadvertently, the nadir which relations between Moscow and Cairo had reached. Thus he admitted that the Egyptian position on negotiations with Israel was very tough; in fact, too tough as far as the Soviets were concerned. At the same time, the Soviets, according to Louis, felt that the Egyptians were hiding things from them and might make more flexible proposals to the Israelis through an American channel. Louis almost sounded enthusiastic when he discussed a future Egyptian-Israeli war in which, according to Soviet assessments, the Israelis would win easily.

Nevertheless, as the record of the conversation shows, the Soviets were too fearful of alienating their Arab allies to offer anything substantial or even admit that the conversation ever took place. As a result, secret meetings such as these which took place during the 1970s between Israeli representatives and Soviet ones failed to bridge the gap between the two countries. This fact goes a long way to explain why the Soviet Union found itself on the sidelines when Israelis and Egyptians started negotiating in earnest following the 1973 October war between them. Soviet failure to improve relations with Israel meant that Egypt needed Moscow only as long as it was fighting Israel. Once Egypt decided to move toward peace, American mediation proved indispensible.

Guy Laron is a Lecturer in the Department of International Relation at the Hebrew University in Jerusalem.

Excerpts from a record of a meeting between Soviet journalist, Victor Louis, and General Director of the Prime Minister’s Office, Mordechai Gazit, 15 June 1973. Conversation conducted in English.

This e-Dossier has been made possible by generous support from the Blavatnik Family Foundation.