Seeking Truth from Facts: Deng Xiaoping's Visit to France in 1975 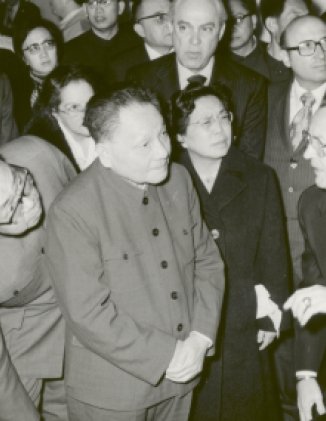 Between 12 and 17 May 1975, Deng Xiaoping paid an official visit to France. He did so in his then-capacity as the First Vice Premier, having de facto replaced Zhou Enlai as the head of state and head of government.[1] The visit came at a crucial moment, both with regard to Sino-French relations and Sino-Western relations more generally. In 1964, under Charles de Gaulle, France had become the first major Western country to fully recognize the People's Republic of China (PRC). Since it would take more than half a decade before other capitalist states followed, Paris took pride in the privileged relationship between the two nations, founded on de Gaulle's bold move. Yet in terms of substance, there was not very much to show from the relationship.[2] Trade remained at a very moderate level and French influence on Chinese policies was effectively non-existent. But at least with regard to political symbols and rhetoric, Beijing treated France with great respect and even gratitude. Numerous French visitors were met by Mao Zedong and Zhou Enlai well before Sino-American relations progressed to the stage of direct contacts. In 1973, for example, Georges Pompidou led the first Western state visit to China and invited Zhou to come to Paris.[3] Zhou, however, was already suffering from cancer and it was therefore up to Deng to go to Paris in his place. The primary purpose of this trip was to repay Pompidou's visit and to express China's gratitude for France's international support since 1964. But its significance went clearly beyond these modest goals, both on a strategic level and on a personal level with regard to Deng's understanding of technical and economic progress.

On a strategic level, the visit came at a time when the PRC leadership was reconsidering its foreign policy and needed a partner. Following Kissinger's visit in 1973 Sino-American relations had reached an impasse, and since the Nixon and Ford Administrations lacked the necessary domestic support for making major concessions to China, the prospects for a rapid improvement were not very good.[4] But at the same time the Chinese fear of a Soviet attack was more prominent than ever, with numerous war scares affecting Beijing in the mid-1970s.[5] For a time in 1972 and 1973, it had seemed as though Great Britain under Edward Heath might develop into a promising partner for China. With his skeptical stance towards détente and his enthusiastic embrace of European integration, Heath was apparently leading his country and possibly all of Western Europe on a course that could turn the European Community (EC) into an organization capable of effectively opposing Moscow or at least binding more Soviet forces in the West. But then Heath lost the elections of 1974 and the following Labor government showed much less enthusiasm for anti-Soviet and pro-European policies and rhetoric. Meanwhile, the new French President, Valery Giscard d'Estaing, tried to reinvigorate the process of European integration.[6] Though supporting détente, Giscard announced an increase in the French military budget and advocated a strong and independent Europe. Therefore cooperation with France became once again attractive from a Chinese point of view.

On a personal level the trip gained its significance from the fact that it would remain Deng's only visit to the West before travelling to the US in 1979 and that he had lived in France for several years in the 1920s at the very start of his political activism. He could therefore compare what he saw with his memories from fifty years earlier. Prior to the start of the reforms this would remain the sole occasion for Deng to get a full first-hand impression of the technological and economic standard that the developed countries had reached.

Against this background the visit provided the setting for a number of talks between Deng and President Giscard d'Estaing, Prime Minister Jacques Chirac, as well as Foreign Minister Jean Sauvagnargues [Documents 3, 4 and 5]. As often during such talks between Chinese and Western leaders, the meetings covered the most urgent international developments as well as bilateral relations. Not surprisingly, Deng Xiaoping attacked the Soviet Union and called for stronger efforts to unite Europe and oppose Moscow. His French interlocutors agreed with him on many issues but refused to openly denounce the Soviets or say anything that could do harm to the French policy of détente. The French leadership never questioned that cordial ties with Moscow were more important than the 'privileged' relationship between Paris and the PRC.

In this sense the visit ended largely in disappointment for the Chinese. At least the position taken by Giscard d'Estaing seemed to suggest that in the future there could be more potential for cooperation between the two countries. The French president explicitly expressed his optimism that the military integration of Europe would make major progress over the coming decades and insisted that France would defend its independence against Soviet expansionism. Giscard also explained that, in his opinion, the United States was technologically and economically far superior to the Soviet Union and that this would eventually come to bear on the strategic balance between the superpowers [Document 3]. Though Deng remained unconvinced, he listened to Giscard with interest. Finally the two sides discussed the current energy crisis and Deng assured the French President that China would give full support to Paris' attempts at convening a global energy conference [Document 4].

Not long after Deng's trip to France, the Chinese government became largely incapable of action. As the health of Mao and Zhou Enlai was failing without an undisputed successor in sight, the PRC lacked the leadership to develop new policy initiatives.[7] Once Deng Xiaoping and Hua Guofeng had pushed aside the left-wing radicals and stabilized their position at the top of the Chinese Communist Party, however, they quickly tried to take up the dialogue with France again, including in highly sensitive fields such as the acquisition of French arms technology. From the point of view of 1975, however, the visit brought few direct gains for either France or China.

Nevertheless, arguably the limited bilateral impact of the visit was offset by the strong personal importance it had for Deng Xiaoping himself. Even before the trip, it was obvious that Deng did not care much about protocol and was instead eager to see the social and economic reality of France.[8] Having known rural France in the 1920s and being well aware of the state of China's agriculture in the 1970s, Deng insisted on visiting a French farm, normally not part of the program for a state visit [Document 1].[9]

The French government reacted positively and consciously tried to give Deng an idea of France’s economic and technological achievements. Not only was Deng given a helicopter tour of Paris to impress him with the 'new towns' constructed since the war, he also had the opportunity to see a French farm near Paris. This allowed the French government to put on display how much the technical equipment and the living standards of a normal French peasant household had improved over the past decades. According to the press, Deng showed much greater interest during this visit than during the preceding trip to the castle of Versailles.[10]

Finally Deng travelled to Lyon, the second city he knew from his first time in France, where he could see that progress had not been limited to the capital. In southern France, Deng visited a modern automobile plant and the nuclear research reactor Phénix at Marcoule. Here he was shown a field of technology in which the French claimed to be several years ahead even of the US. Newspaper pictures show Deng in protective clothing looking in awe at the French nuclear installations.[11]

In short, the trip gave Deng a personal impression of just how far the PRC had fallen behind. If he still needed convincing that China had to fundamentally change its ways with regard to economic and research policies, the trip to France clearly provided more than enough occasions. It also confronted him with the fact that China needed the help of the West in order to achieve a quick modernization. Finally the talks with Giscard presented Deng with a quite nuanced assessment of the Soviet Union. Though it would take almost another decade before Beijing and Moscow would start a process of reconciliation, Giscard already provided Deng with the key argument for a more moderate policy, namely that the Soviet Union was structurally weaker than the US because of its insufficient technological innovation. Once the Chinese realized that the USSR was indeed in decline while American power was rapidly increasing, the way would be open to seek better relations with the Communist superpower.

There are very few personal comments by Deng on his visit to France on record. But the French noted that shortly after returning to Beijing Deng tried to convince foreign visitors from Iran and other countries of the advantages that cooperation with France could have for them [Document 2]. This was interpreted as a direct effect of the visit that the French considered an all-out success.[12]

Martin Albers is currently completing a PhD dissertation at the University of Cambridge. His research focusses on British, French and West German policies towards the PRC during the 1970s.

Undated [May 1975], "Visit to France by Monsieur Deng Xiaoping Vice-Premier of the People's Republic of China; Itinerary of the visit from 12 to 17 May 1975"

13 May 1975, "Verbatim record of the meetings between the President of the Republic and Monsieur Deng Xiaoping, Vice-Premier of the People's Republic of China, First meeting"

14 May 1975, "Verbatim Record of the meeting of the President of the Republic with M. Deng Xiaoping, Vice Prime Minister of the People's Republic of China"

12 May 1975, "Verbatim Record of the talks between the Prime Minister and M. Deng Xiaoping"