Students and Democratization in Egypt 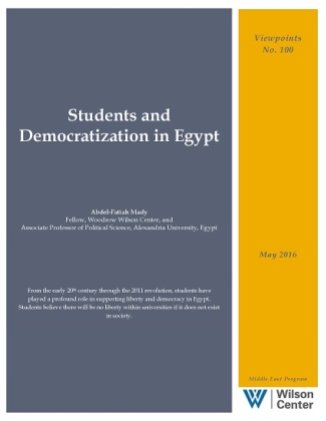 Students at Egyptian universities have joined the public protest against Egypt’s recent agreement with Saudi Arabia to give up control of the Red Sea islands of Sanafir and Tiran. The students chanted “the people want the downfall of the regime,” a slogan that was often repeated during the 2011 revolution.

In December 2015, student elections were held in Egypt for the first time in more than two years. Despite security interference and a lack of participation, independent candidates won in most universities at the expense of government-affiliated lists. Independents also won 12 of the 14 positions in the Student General Union of Egypt. A few days later, however, the Ministry of Higher Education nullified the elections results.

From the early 20th century through the 2011 revolution, student activism has played a profound role in supporting liberty and democracy in Egypt. For example, students at Al-Azhar University, as well as high school students, supported the ‘Urabi revolt of 1879-1882 (a popular uprising led by Colonel Ahmed ‘Urabi, who sought to depose the Khedive Tewfik Pasha and end British and French influence over Egypt). They were also at the forefront of the 1919 revolution against the British and ignited two uprisings in 1935 and 1946, demanding independence and a democratic constitution. University students sided with Muhammad Naguib and the demands for democracy in the 1954 crisis, and they revolted against Gamal Abdel Nasser’s police state after the 1967 military defeat. They supported the laborers’ uprising in 1977 and opposed Anwar Sadat’s economic openness policies and reconciliation with the Israelis. They protested in solidarity with Arab and Muslim causes during Hosni Mubarak’s reign. They have supported youth protests since 2004 and have been the backbone of all the protest movements that have flared up since the January 25 revolution.

University students have always raised demands to enact bylaws that guarantee their free practice of activities on campus. They have also demanded the formation of elected representative boards and that the state’s security apparatus does not intervene in their activities and elections. Students have tied their demands and educational conditions to two other requirements. The first requirement is that the government’s political decisions must be independent and guarantee political participation by all factions in accordance with a democratic constitution. Their conviction is that there will be no liberty within universities if it does not exist in society. The second requirement is that there must be developmental plans in place that serve society as a whole and guarantee job opportunities for graduates.

The 2011 revolution was an opportunity for students to call for a series of key demands: the amendment of student bylaws to guarantee autonomy for student unions, alongside radical reforms in the education system in terms of curriculum, teaching styles, university independence, and teachers’ salaries. These noble ideals were shortchanged by the events of July 2013, wherein student activists faced the regime’s repression. In this resurgence of the police state, there are several key implications for student activism and its future role in cultivating democratization in Egypt.

Since June 30, 2013, divisions within the student movement over student bylaws and electoral representation have become increasingly polarized between supporters of the current regime and its opponents. Students who were once divided on how to respond to the July 2013 coup are now united on the broader political goals of ending political repression against them, reinstating academic freedom, and withdrawing security forces from campuses. Many students believe Sisi’s regime has exploited its war against the Muslim Brotherhood to dismantle student activism and to eradicate what remained of academic independence and freedom.

Regime brutality against students cannot be underestimated. Utilizing the full array of military power, including the use of tanks and live ammunition to storm into campuses and dormitories, the present regime’s campaign against the student movement ostensibly exceeds all previous administrations in modern Egyptian history. For example, the 2014 annual report of the Egyptian Association for Freedom of Thought and Expression reported that in 2014, 12 students were killed, 760 were arrested, 673 were expelled, 23 were referred to military courts, and 31 were removed from dormitories.

Regime repression against students also extends to legislation. Following the ratification of a constitution in 2014 that consolidated the military’s sovereignty over parliament, Sisi issued two presidential decrees, as well as a series of legal amendments, specifically designed to undermine student activism. These included a new student bylaw that bans partisan political activism and grants the executive authority expansive regulatory powers, a return to the appointment system of university administrators (as of June 2014), an amendment to university regulations at Al-Azhar University to allow for the expulsion of faculty who join political protests (as of September 2014), and a September 2014 presidential decree announcing that all public establishments—including university campuses—are heretofore subjected to the authority of the military court system. Moreover, the regime canceled student union elections in both the 2013-2014 and 2014-2015 academic years.

Beyond legislative repression, the regime has embarked on a systematic campaign to vilify student activists in the media. A number of public figures asked security forces to “kill” and “oppress” students and protesters in order to achieve “stability” and “security.” Meanwhile, the regime has dissolved most of the board of directors of faculty members’ clubs and professional syndicates, following several humiliating incidents of security intervention in their internal affairs—in some cases threatening elected professors and professionals. Some professors and intellectuals have even called for the formation of watchdog groups of “patriot students” tasked with reporting on their fellow students; some university presidents have taken pride in recruiting students as whistleblowers in this vein, as has the president of Al-Azhar University in the 2014–2015 academic year.

The Weakness of Democratic Forces

It is imperative to view student activism as inextricably linked to broader political demands emanating from Egyptian civil society in general. Student demands for educational reform and academic freedom will not be achieved without genuine democratic change in Egypt.

Accomplishing as much, though, would necessitate that liberal, leftist, and Islamist forces critically reevaluate their commitments to democratic change. Islamist and non-Islamist forces as well as the military council have proven guilty of mismanaging the first transitional period (February 2011-June 2013). Liberal and leftist forces have also proven guilty of having double standards with regard to issues of human rights and democracy after 2013. The events of June 30, 2013 portend the lack of a truly liberal current in the Egyptian political landscape because many liberal figures have supported the regime’s repression against Islamists. After former President Muhammad Morsi’s election in June 2012, both liberal and leftist figures have expressed antagonism toward Morsi and the Muslim Brotherhood, demanding a recall presidential election rather than properly offering a political alternative to the Brotherhood. Similarly, many liberal and leftist figures collaborated with the Tamarrud (Insurgency) campaign that ignited the drive to topple Morsi, which was later demonstrated to have links with deep state institutions and their regional allies.[1]

Yet these same “liberal” and leftist figures—alongside other political forces like nationalists and Salafis—for all their indignation against Morsi and the Muslim Brotherhood during their time in power, have proven oddly silent in the face of egregious abuses and political repression committed by the security forces under Sisi since Morsi’s overthrow. Many have actively supported the repressive measures of the current regime, including security repression of students, academics, and political activists, and beyond to include the politicization of the judiciary, media campaigns against the opposition, and the repressive legislation mentioned earlier. Many have also endorsed the regime’s campaign against Islamists; some have gone as far as to advocate for an exclusionist democracy without the Muslim Brotherhood, on the basis of Brotherhood members being “unpatriotic,” thus endorsing the present regime’s campaign of “Debrotherhoodization.” It suffice to say, for the university scene to be a true contributor to Egyptian civic life more broadly, such contradictions would need to be formatively addressed.

One cannot escape the negative repercussions that have been accumulating for decades due in large part to long-term repressive policies by the authoritarian regimes in the Middle East. Violent extremism is fueled by exclusive policies of political regimes, the failure of democratic transition, the sense of injustice and the feeling of humiliation prevailing in the region, particularly among the youth, and the absence of truly democratic forces, whether they be liberal, Islamist, or leftist.