The NAFTA Negotiations: A Mexican Perspective 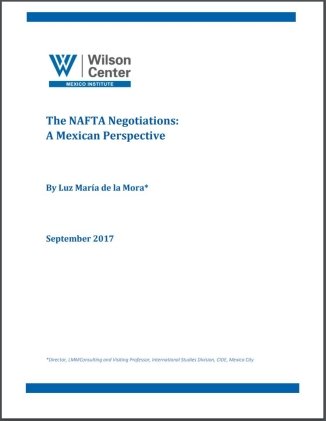 The launching of the North American Free Trade Agreement (NAFTA) negotiations on August 16, 2017 begs a serious and thorough discussion given what it is at stake for the three countries in terms of trade, investment, economic integration, competitiveness, jobs, shared production, and innovation. While a NAFTA modernization has been long overdue, this renegotiation was motivated by the wrong reasons; i.e. to address the United States’ concern regarding its trade deficit with Mexico and to return lost jobs to the U.S. manufacturing sector.

When the NAFTA negotiations were launched in Washington, DC, United States Trade Representative (USTR) Robert Lighthizer’s remarks underscored “the huge trade deficits, the lost manufacturing jobs, the businesses that have closed or moved” as a result NAFTA.  In sharp contrast, Canada and Mexico framed this process as an opportunity to modernize the Agreement to better respond to the 21st century economy. Canadian Foreign Minister Chrystia Freeland and Mexico’s Secretary of Economy, Ildefonso Guajardo, used their opening speeches to reiterate that NAFTA has benefited the three partners and considered it a very favorable pact. In direct contrast with Trump’s and Lighthizer’s statements, Secretary Guajardo called the NAFTA a “strong success for all parties,” while also stressing that Mexico is not the problem but rather “the solution to the region’s competitiveness.”  Given these diametrically opposing views and goals, Mexico and Canada have a very hard act to play in order to come up with an agreement that responds to their own interests while also addressing the United States’ key concerns.