Transparency in Mexico: An Overview of Access to Information Regulations and their Effectiveness at the Federal and State Level 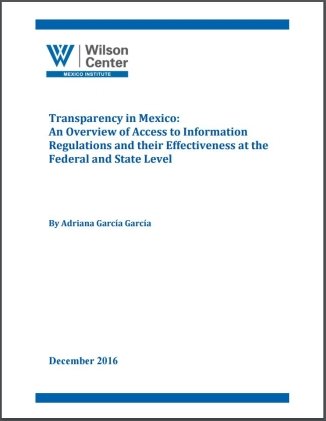 In 2015, the Mexican Congress enacted the General Transparency Law responding to organized advocacy efforts and active participation by scholars and local NGOs (including a coalition of Mexican NGOs) demanding for an enhanced and uniform access to information legislation across the country. Prior to the 2015 passage of the General Transparency Law, Mexico’s 33 separate jurisdictions —31 states plus Mexico City and the federation—imposed different legal frameworks and institutional capacities on citizens and businesses, imperiling transparency. Given the role of transparent government in improving the rule of law, fighting corruption, and achieving economic growth, these differences were an area of significant concern. While every jurisdiction has complied with the new requirements, effective differences remain due to variation in states’ institutional capabilities and political will for implementing the laws. According to the most recent ranking of transparency in Mexico performed by Centro de Investigacion y Docencia Economicas, the quality of freedom of information law increased but effective access decreased. The current study analyzes these differences as well as the effects of the 2015 General Transparency Law across Mexico. The results urge the necessity of monitoring the effective implementation of the recently improved laws. Otherwise, the improvement of laws will represent mere window-dressing rather than actual transparency and the benefits it brings.