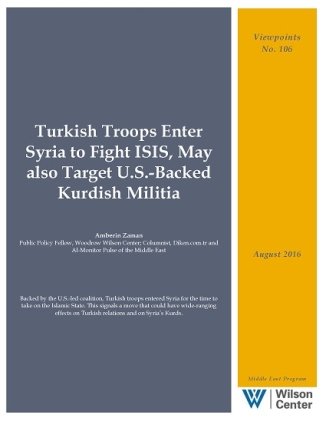 Backed by U.S. airpower, Turkish military forces swept into northwestern Syria in the early hours of August 24, marking a dramatic new turn in the campaign against jihadists of the so-called Islamic State (ISIS) in Syria.

The push, involving Turkish special forces and assorted Syrian rebels, raised alarm bells among the main U.S. ally in Syria, the Kurdish People’s Protection Units (YPG), and prompted harsh warnings from Damascus over the breach of its territorial sovereignty.

The operation, called “Euphrates Shield,” is meant to dislodge ISIS from the strategic border town of Jarabulus and to preempt any YPG moves to get there first.

Coming just hours ahead of U.S. Vice President Joe Biden’s fence-mending visit to Ankara, the attack marks the first time Turkish troops have crossed into Syria for offensive action against ISIS, and, potentially, the YPG.

In a series of Tweets, Turkish presidential spokesman Ibrahim Kalin made Turkey’s intentions clear: “The Jarabulus operation’s purpose is to expunge our borders of all terrorist threats including ISIS and the YPG,” Kalin wrote.

Should the offensive prove successful, this would deal a serious blow to the jihadists and if managed properly could help ease tensions between Turkey and the United States. These tensions sharply escalated following the July 15 botched coup attempt to overthrow Turkish President Recep Tayyip Erdogan. He blames the foiled putsch on Fethullah Gulen, a Sunni Muslim cleric and former ally who lives in rural Pennsylvania. Washington’s failure to meet Turkish demands for Gulen’s immediate extradition has triggered a wave of anti-U.S. hysteria in Turkey amid claims, including from top officials, that Washington had a hand in the plot.

Even before the coup, anti-American sentiments were riding high over U.S. support for the YPG. It is a well-established fact that the YPG was founded by the Kurdistan Workers’ Party (PKK), the rebel group that has been fighting on and off inside Turkey—initially for independence and now for autonomy—since 1984. The fact that the PKK is on the U.S. State Department’s list of terrorist organizations but the YPG is not has allowed the United States to join forces with them against ISIS. The alliance has benefited both sides. ISIS has been booted out from a string of towns and villages along the Turkish border, allowing the Syrian Democratic Forces (SDF), which is YPG-led and partially Arab, to move in.

This, in turn, has deepened Turkish fears of the establishment of a PKK-governed Kurdish entity on its borders. Ankara’s demands that Washington ditch its alliance with the Syrian Kurds have fallen on deaf ears. This is mainly because Turkish-sponsored rebels, some of whom were equipped and trained by the CIA, have been unsuccessful against ISIS, so far. This is partly because the rebels are more interested in fighting the Syrian regime.

Ankara’s hands were further tied because of its huge blow up with Russia, which erupted in November 2015 when Turkey shot down a Russian jet over the Syrian-Turkish border. Since then, Turkish planes have not flown over Syria for fear of Russian retaliation. It was a golden period for the Syrian Kurds. Backed by the United States and Russia alike, the YPG and the SDF gobbled up huge chunks of territory, most recently capturing the town of Manbij earlier in August. Its impotence in Syria propelled the government to crack down on the PKK inside Turkey instead. The PKK has responded with increasingly brazen attacks, killing civilians and members of the security forces alike.

The fighting has displaced tens of thousands of civilians and pulverized entire neighborhoods in a string of mainly Kurdish towns and cities in the southeast. Pressure on the pro-Kurdish People’s Democracy Party and its sister organization, the Democratic Regions Party, has intensified as well. Hundreds of their members, including elected mayors and lawmakers, face prosecution or are already in jail.

Turkey views the PKK’s growing foothold in Syria as an existential threat. This has spurred a major overhaul of its foreign policy. Ankara has mended fences with Israel and Russia, and rekindled ties with Iran amid reports that Erdogan will soon be traveling to Teheran.

Russian President Vladimir Putin is expected to reciprocate Erdogan’s recent visit to Moscow with a planned visit to the Turkish Mediterranean resort of Antalya on August 31, where the two leaders are set to watch a World Cup pre-qualifier match between their national soccer teams.

In a further U-turn, Turkey has signaled that Syria’s President Bashar al-Assad can stay on for an “interim” period, though “not in the long term,” just as Ankara ramps up its diatribes against Washington over Gulen and the YPG.

Ankara’s moves are calculated to squeeze the Kurds, and they seem to be having an effect. Until recently, Washington was reluctant to support Turkey’s demands to back any rebel offensive against Jarabulus.

The rebels’ previous attempts to take the town of al-Rai—despite massive U.S. air support—failed. The United States was understandably skeptical that they would succeed in Jarabulus, which would require far greater prowess and force.

Several factors may have swayed U.S. thinking. The first is urgency. The longer ISIS retains access to the Turkish border, the greater the risk that a planned attack inside the United States will succeed. The second is Turkish forces are physically taking part in the offensive. Previously Turkey said it would only send its own forces across the border if U.S. Special Forces were deployed alongside them. It remains unclear whether any Special Forces are on the ground with the Turks. Another overriding factor, though, may be the rapidly fraying relationship with Turkey and fears that this may result in termination of access to the Incirlik Air Base.

Recent Kurdish actions have only made things worse. Turkey had agreed to go along with the Manbij operation only after the United States pledged that the YPG would pull back to its former position east of the Euphrates River once the town was taken. Instead, the YPG declared that it was pushing further west toward the ISIS-controlled town of al-Bab, all part of a long-running plan to link up the territories under its control with another Kurdish-controlled enclave, Afrin, that lies west of the river.

YPG commanders in the field claim that they were encouraged to do so by the United States, but Biden contradicted those claims in Ankara by saying the YPG had to pull back.

U.S. officials say helping the YPG to move further west is out of the question. The truth probably lies somewhere in between. In an effort to keep the Kurds and Turkey simultaneously on board, Washington is likely to have promised both sides more than it can deliver.

Meanwhile, the YPG suffered a further setback when Syrian air force jets began pounding the northeastern town of Hasekeh last week, killing scores of Kurds, including at least 27 civilians. The aerial assault marks a first, triggering speculation that the regime was acting in concert with Turkey.

Speculation about a possible deal between Syria and Turkey appeared to be belied by Damascus’s harsh response to the Turkish incursion. But what matters more is what Russia, without whose support the Assad regime would collapse, had to say. Russia’s foreign ministry issued a relatively mild statement expressing “deep concern” and calling for the Syrian conflict to be resolved through “dialogue involving all ethnic groups, including the Kurds.”

It is improbable that Turkish planes would have resumed their sorties over Syria without Moscow’s tacit consent. Some believe that a grand bargain for Syria may be in the making. This would likely involve Turkey cracking down on Jabhat al-Nusra, the powerful jihadist group whose claims to have severed ties with al-Qaeda have failed to sway either Washington or Moscow, and who continues to pose the gravest threat to Assad (and with their “man-portable” defense systems [MANPADS], to Russia as well). Others dismiss such claims, saying Turkey is unlikely to forsake any leverage over Damascus until the new U.S. administration is in place.

Much hinges on the outcome of the Jarabulus offensive.

If it fails, Washington may well have to fall back on the YPG, to uproot ISIS from the Turkish border. And should it succeed, what would an emboldened Turkey do? Will it use its newfound leverage to resume peace negotiations with the PKK, or will it turn its guns on the YPG? Syria’s Kurds demand to know. 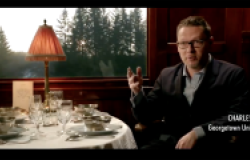 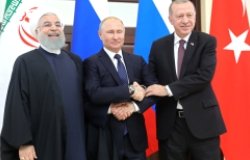 Blog post
Governance
Russia, Turkey, and Iran: Learning to Work Together in the Absence of the United States
By Rahim Rahimov on February 28, 2019 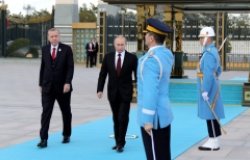 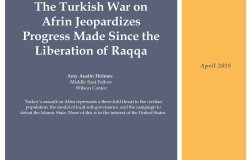 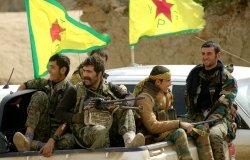