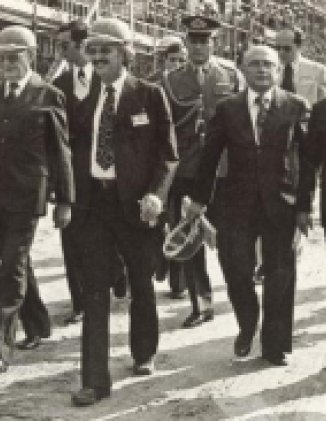 Brazil's nuclear program in the 1970s faced opposition from the US as the Carter administration sought to make nuclear non-proliferation a top priority.

The 1970s witnessed a renewed concern with nuclear proliferation, as India tested its nuclear device and numerous developing countries such as Argentina, Brazil, Iraq, Libya, Pakistan, South Korea, and Taiwan made strides in the field of nuclear technology. These countries’ reasons for seeking this technology were multifarious: assuring that their growing energy needs were met in the face of recurring oil crises; powering naval vessels; acquiring a nuclear deterrent against more powerful neighbors; as instruments of broader industrial and technological development policy; or simply amassing prestige and status.

This concern was visible in the Ford administration, which had conducted a review of its nuclear policies and intended to strengthen international regimes and work with other suppliers of nuclear technology to impede or delay other “Peaceful Nuclear Explosions” and proliferation in general [document 1]. It was under Ford that the US Atomic Energy Commission announced that it would reassess all future contracts of uranium supply; that US officials pressed the “Euratom Supply Agency” to cease all transfers of special nuclear material to Brazil [document 2]; and pushed West Germany to remove ultracentrifugation technology from the agreement with Brazil and to sign a complementary safeguards agreement with the IAEA.

But it was Jimmy Carter, who, encouraged by Congress, made nuclear non-proliferation a top policy priority early in his Administration. Even before entering office, on November 15th 1976, Carter gave a speech that set the tone for a very assertive stance on non-proliferation, specifically his intention to block the sale of fuel reprocessing plants from West Germany and France to Brazil and Pakistan, respectively. In January 1977, Carter’s vice-president Walter Mondale made his first official visit to FRG President Helmut Schmidt, where he reiterated his administration’s viewpoint and requested that the German-Brazilian agreement be suspended temporarily for review. This triggered a negative response from both the Brazilian and German sides – with German officials reassuring both Brazil and, to a lesser extent, the US while possibly misleading both – and led to an immediate souring of US-Brazil relations [document 3 and document 4]. In subsequent years, the US maintained the pressure – joined by other countries such as the Soviet Union, Great Britain and Netherlands [document 5] – presenting a combination of threats (explicit and veiled) and incentives for Brazil to abandon its pursuit of enrichment and reprocessing technology [document 6]. In 1978, Carter signed into law the Nuclear Non-Proliferation Act, reducing US production of plutonium and further restricting exports of nuclear fuel.

The constraints imposed by external actors had a great bearing on technical and political aspects of Brazil’s nuclear program. The construction of the Angra I nuclear plant contracted from Westinghouse was severely delayed, as were the Angra II and Angra III plants stipulated in the agreement with Germany, with the latter still under construction at the time of this writing. US opposition to the transfer of German ultracentrifugation technology led to German-Brazilian joint investment in the development of enrichment by jet nozzle, which ultimately revealed itself technically and economically impractical [document 7]. But perhaps most important were the safeguards inserted in the agreement with Germany and the ensuing tripartite agreement with the IAEA, which together imposed severe limits to the range of research and experimentation that could be done in Brazil with materials, technology and facilities associated with the German agreement.

Given these constraints imposed by major powers and international regimes, if Brazil wanted to make real progress on enrichment technology, the argument went, it would have to do so covertly and by cooperating with other countries on the margins of the NPT. This led to the creation of the so-called autonomous (aka parallel) nuclear program free of safeguards in 1978 [document 7]. Brazil would then seek to develop its own indigenous enrichment process as well as a nuclear powered-submarine and nuclear explosives. The means by which Brazil would do this included purchases of material and know-how in the international atomic “bazaar”, and cooperation agreements with other developing countries like Iraq, China and, most importantly, Argentina.

Existing documentation suggests that US pressure waned significantly in the second half of the Carter administration as attention was drawn towards more pressing matters in Europe, and especially when Carter left office, but difficulties in this matter persisted throughout the eighties. As a lingering result of Carter’s Non-Proliferation Act, the US required comprehensive safeguards on all Brazilian nuclear facilities to make the first delivery of replacement nuclear fuel for the Angra I nuclear plant [document 8].

Dani Nedal is pursuing a Ph.D. in international relations at Georgetown University. He is also a research fellow at the University of Birmingham's Institute for Conflict, Cooperation and Security, and a contributor at the Center for International Relations at Fundacao Getulio Vargas in Brazil.

Document 1: National Security Study Memorandum (NSSM) 202 on Nuclear Proliferation
Source: Nixon Presidential Materials Staff – Box H-205 – NARA
Date: 23 May 1974
Description: This National Security Study Memorandum, issued in the wake of India’s nuclear explosion, reviews US policy on nuclear non-proliferation and lays out suggestions on how to mitigate the possible effects of India’s test on other countries’ nuclear programs. The document recommends both the strengthening of the multilateral non-proliferation regime centered on the NPT and the IAEA and working together with nuclear industrial states, such as the USSR and France, which have a shared interest in inhibiting or at least delaying the proliferation of nuclear technology.

Document 2: US restricts French transfer of nuclear material to Brazil
Source: AAS (Azeredo da Silveira Archive) mre d 1974.03.26 p.5116-5127
Date: 01 December 1975
Description: A series of secret communications between the Brazilian Ambassador in the US and the Brazilian Foreign Ministry, regarding US opposition to the transfer of special nuclear material of US origin from France to Brazil.

Document 5: Soviet pressure on West Germany
Source: AAS (Azeredo da Silveira Archive) mre pn 1974.08.15 pp. 589-591
Date: 21 March 1977
Description: Brazilian ambassador in Bonn reports on a Der Spiegel article’s account of Soviet efforts to communicate to West Germany its agreement with US reservations regarding the agreement with Brazil. Despite the rebuff from German diplomats, this account is consistent with subsequent Soviet posturing in the Suppliers Group and communications with the Brazilian government regarding this issue.

Document 6: Silveira to Geisel: US threats and promises and Brazilian responses
Source: AAS (Azeredo da Silveira Archive) mre pn 1974.08.15 pp.544-549
Date: 25 February 1977
Description: This memo from Foreign Minister Silveira to President Geisel is an assessment of potential “threats and promises” the US government might employ to compel Brazil and Germany to change course with regards to their nuclear cooperation. It also outlines possible Brazilian responses to these measures.

Document 7: Oral History Interviews
Description: Interviews with key nuclear aides suggest that acceptance of jet-nozzle technology might have been due to ignorance of technical issues by the Brazilian negotiators. Former Cnen President Rex Nazareth claims, instead, that once ultracentrifugation was taken off the table in the final stages of negotiation, there was no alternative. Admiral Othon Pinheiro suggests that dissatisfaction with the performance of the jet nozzle technology may have been instrumental in the approval of a laser-enrichment project under Air Force direction. A former advisor to the Brazilian National Security Council argues that international impediments in the fuel cycle led President Geisel to authorize a parallel nuclear program in 1978.

Document 8: Guerreiro meets Haig
Source: Informação para o Senhor Presidente da República, 131o Despacho
Date: 30 September 1981
Description: Meeting, in Washington, D.C., between Foreign Minister Saraiva Guerreiro and Secretary of State Alexander Haig. The Secretary tells Guerreiro that the nuclear regulations in the US that were, among other things, impeding the supply of uranium for Angra I were “aberrations”, result of a “fixation” of the Carter administration. This “insanity” needed to be changed, and the issue with Brazil could be resolved, Haig suggested. Haig’s intimations, however, never took place and the first fuel replacement for Angra I was eventually purchased from the German company KWU.