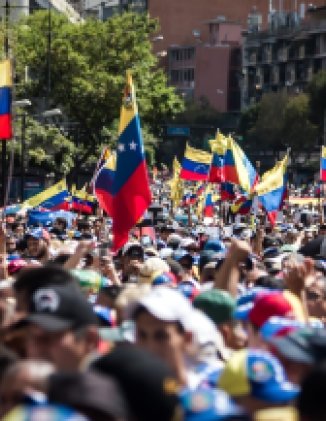 On the eve of negotiations expected to begin between officials of the Venezuelan government and members of the political opposition, the Latin American Program is pleased to publish a new study, Venezuela’s Elusive Transition: Toward a New Path,by Abraham F. Lowenthal.  The author, a leading scholar on inter-American affairs and the Program’s founding director, draws on extensive interviews and research on Venezuela as well as his previous work on transitions from authoritarian rule toward democracy in Latin America and other regions. Lowenthal identifies the recurrent challenges such transitions face and suggests how the chances that an autocratic regime will give way peacefully can be improved.

Lowenthal provides advice for Venezuela’s democratic opposition and its international supporters, based on understanding the initial appeal of chavismo to important sectors of the Venezuelan population; the declining popularity of the chavistas but the opposition’s failure to secure durable popular support; the need to adopt incremental approaches, compromises, and concessions; and the need to focus sharply on securing the conditions necessary for nationally and internationally credible elections. He provides a frank analysis of the strategic errors the opposition and its international supporters have made in pursuing maximalist aims, eschewing mutual concessions, and depending on international intervention, particularly from the United States.

Lowenthal outlines five principles for an effective strategy: developing and articulating an attractive, feasible and genuinely inclusionary vision for Venezuela’s future; cooperating with incumbent Venezuelan officials and the international community on practical measures to improve the quality of life for all Venezuelans; prioritizing participation in free, fair, credible, and internationally monitored elections; developing processes to achieve transitional justice under law for all Venezuelans; and encouraging the valid and supportive role various nations could play, consistent with their own interests, in removing  obstacles to a better future for Venezuela.

This paper is part of a series produced by the Latin American Program’s Venezuela Working Group.