An interview with Nataliya Rostova, Starovoitova Fellow, upon the completion of her grant “The Russian Mass Media of the Post-Perestroika Era.”

Malinkin: What were some of your impressions from the American media?

Rostova: I was surprised to watch some of the American methods of using television. More critical, traditional journalism is presented on the national U.S. television channels. A major difference with Russia is the large number of one-sided channels and their broad distribution in Russia, whereas the U.S. has more channels that present a variety of opinions.

I didn’t watch a lot of Russian TV here, but I did see some coverage of the protests and anti-protests, and it was quite interesting. I realized how unaccustomed to Russian TV I had become from just a few months of not watching it. It was hard to watch programs that did not have any analysis—a TV station is free to express its like or dislike of something, but the way some programs show their dislike is so hysterical that it is really hard to watch. When the anchor of a 100-percent state-owned channel says John Lennon’s song “Imagine” was a manifesto of “vulgar Communism,” and then connects it to the Pussy Riot act at the church, and then compares it to the violent Viennese Actionism movement, it just sounds ridiculous. There is no logical connection between the topics—just hysteria. So, in short, I became estranged from [Russian TV]. I complained to one of my colleagues who had to watch Russian TV for her job, and I don’t know how she survived because it’s really hard to watch it—you have to have strong nerves and be psychologically tough not to be influenced by this hysteria.

One trend in Russian journalism now is that many opinion columns have appeared. Almost everyone writes a column. Not that many journalists are looking for facts or covering stories or interviewing people. A lot of new columns appeared since the protest movement began so it seems our journalism has become really opinionated. Everybody wants to tell his opinion in writing—even if it doesn’t really matter, I’m sorry to say.

From my count, you conducted almost 40 interviews while you were in residence—can you talk about some of the interviews that most surprised you and why?

I just loved Richard Wortman. I went to New York and I was afraid I would meet a snobbish professor who excels in his field and that he would show me how ignorant I was. Nothing like that happened. I just loved him from the very beginning, and I realized that he’s a classic American professor in the best way: really wise, knowledgeable and very kind, and a man with a great sense of humor. We talked for two hours, and we laughed for two hours. Russian politics and Russian history—it’s not actually that funny, but I really enjoyed that conversation. I also liked the interview with David Satter, who said, by the way, that Russian Communists like him because he is critical of Yeltsin, and I found it funny. We were talking about the history of Russia, and he was really critical of both Yeltsin and Putin. I told him that he sounded very pessimistic and asked why he is one of the few real pessimists in Washington and he said “you have to be a fool to be optimistic.” He’s a very knowledgeable man, and I was really surprised how deeply Washington Sovietologists, Kremlinologists, and Russophiles understand Russia.

Writing from abroad, do you have any observations on the Russian media’s audience? Did you get a sense of how your articles were received or what topics “Slon” readers are most interested in?

I just remembered one comment which I loved—it was on David Satter’s interview which [of all the articles Rostova wrote in the U.S.] was read by the most readers—about 19,000 people. One person wrote “Ish ti—inostranets, a vso ponimaet!” The idea is, even though he is a foreigner, he understands everything.

Do you think this comment was sarcastic or earnest?

It was earnest, but in an ironic way. But it was a compliment for sure. The perception of the person who wrote it is that foreigners cannot understand Russia. So David surprised this reader that he is a foreigner who understands the country. We have this idea in Russia that we are so complicated that no one can understand us. I personally don’t think foreigners can’t understand us. I think it’s possible, of course.

What do you think are the most under-reported topics in the Russian media today?

I don’t want to judge Russian journalists from abroad when I have not been covering Russian news, but there has always been a problem in covering the leader of the country, and recently we had the issue with Vladimir Putin’s health. Nobody knew what was really going on—it was Reuters that broke the news that he was having health issues. Historically in Russia we don’t really know what’s going on with the leader of the country in terms of his or her personal life. Yeltsin was an exception. That’s why it was such a big deal when there was coverage of his heart attack and surgery.

Another issue that does not get enough attention is corruption. It is always interesting for journalists, but not that many people write about it. But I want to add that corruption is becoming a hot topic in the Russian media, and a politicized media campaign is growing against certain officials.

How do you view the current political situation in Russia?

People are so disappointed. I left the country when the protest movement was unpredictable. The organizers applied for a rally of 300 people, and suddenly 100,000 people came. Since I wasn’t there, I couldn’t really feel it, personally, but I could get a sense from the media, and Facebook, and people I talked to that there was huge hope, and actually, I don’t know why. Of course, the number of people who went into the streets gave people hope, but I had seen a lot of protests in previous years—covered several of them, and participated personally as a citizen—and it was always very disappointing. You knew that there might be 50-300 people who would come out to protest. So I had fewer illusions than some of my friends who participated in the protests for the first time, and it was not a surprise to me that nothing happened. So I don’t have much hope, but I think the political situation will only change if there will be a split in the elite, as it has happened before in our history.

How unified is the elite now?

It seems they are not very unified. We have a lot more stories on corruption in the media now, for example. When something bad happened before, not a lot of media outlets covered it. We might be seeing the beginning of an anti-corruption media campaign. For example, when Yurii Luzhkov had to resign from the Moscow mayor's office two years ago several TV programs covered the scandals surrounding his wife’s businesses, which everyone who is interested in politics had known about for a decade, but the mainstream media had ignored—and then it came out. So it was an example of “kampaneishina,” a media campaign.

Do you think your writing or interview style has changed in any way since you’ve been here and how?

I don’t know. In general people are more polite in America so maybe I became softer here. I have to be ready to switch again when I go back to Russia. But it's hard to compare because I interviewed completely different people here.

Can you share your impressions of the namesake of your grant—Galina Starovoitova—and how your work relates to her legacy?

I would be too self-assured to say that my work is somehow connected to hers. She was such a prominent politician and strong person and that’s probably why she was assassinated. I won’t compare myself with her. We have the same gender… 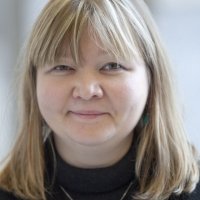