Reflections on Afghanistan, One Year Post-Withdrawal

A diverse group of specialists, all of whom participated in the Wilson Center's Hindsight Up Front Afghanistan activities over the last year, look back and look forward as Afghanistan marks one year since U.S. forces left the country.

General (Ret.) David Petraeus is co-chair of the Wilson Center’s Global Advisory Council and former commander of U.S. and NATO Forces in Afghanistan.

Nilofar Sakhi is a lecturer at George Washington University and a senior fellow at the Atlantic Council.

Masuda Sultan is a women’s rights activist and co-founder of All in Peace. 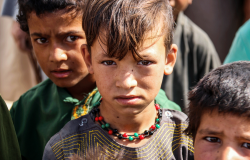