Skip to main content
Support
Explore More
Close
Event
Conflict Resolution and Peacebuilding
Director's Forum: The United States – Africa Partnership: The Last Four Years and Beyond
On January 16, 2013 at 2:00 – 3:30
Share on FacebookShare on TwitterShare via Email
Share
Part of the CONTEXT Series
Video

For decades, much of the news about Africa was negative. From disease and famine to horrific violence, the continent has certainly endured its share of problems. And while challenges remain, positive trends are leading to increasing good news from across the African continent. To learn more about those trends and developments, and also about U.S. involvement with the nations of Africa, we spoke with Johnnie Carson, a former ambassador to three African nations who currently serves as Assistant Secretary of State for the State Department’s Bureau of African Affairs. 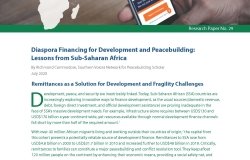