Angela Merkel’s departure from the political stage in September will be profound for Germany and for Europe. She has steered the shoals of many crises. She is leaving behind a Germany that has become more open yet less settled, more diverse demographically and politically, more pressured economically, and less circumspect internationally than when she arrived. She worked with Putin but evaded his embrace. She engaged her French counterparts but avoided their shadow. She neatly sidestepped the Trump tempest. Under her tenure, Germans have remained committed to multilateral solutions to international problems, but they have become less inhibited about defining terms of engagement more conducive to German interests. They are still committed to European integration, but they have come to realize that the slogan “more Europe” isn’t always an answer to German questions. They have come to expect less from America even as Americans have come to expect more from Germany.

Under Merkel, Germany has once again become Europe’s center, the key swing state on a continent in tremendous flux. It is a country with great weight yet uncertain power. It is selectively strong. Yet it retains significant vulnerabilities and is often beset by self-doubt. As Germany rose, Merkel understood the hesitations of her neighbors and the uncertainties of her compatriots. Merkel’s cool, cautious and incremental style was so distinctive it became a verb. When she was at her best, merkeln came to mean an ability to manage united Germany’s evolution in a way that reassured other countries about Germany and reassured the Germans about themselves. That is perhaps her greatest legacy.

This comment is part of a series commissioned by the American Institute for Contemporary German Studies. Additional reflections may be found here. 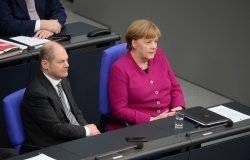 Blog post
Energy Security
The Battle over Nord Stream 2 Is Yet to Come
By Valeriya Izhyk on October 4, 2021