Beneath Iranian Supreme Leader’s New Plan for Women, Social Structures of the Past

By Haleh Esfandiari on September 9, 2016

The leaders of the Islamic Republic remain obsessed with the “women’s issue”: how to handle a younger generation that is increasingly assertive; bold; and hungry for education, professional employment, and engagement with the world.

Iran’s supreme leader, Ayatollah Ali Khamenei, has again turned his attention to the role of women in society.

In a 16-point declaration issued Saturday to all three branches of government, the supreme leader discussed making Iran a “family-centered society.” Basically, Ayatollah Khamenei wants women to marry, raise children and be homemakers.

His policy statement calls for “a national, all-encompassing campaign to facilitate and increase marriage and to discourage remaining single.” This is to be achieved through legislation and regulations and through policies inculcating in Iranians “the culture and value of forming families,” as well as the idea that “divorce is hateful.” He also called for “banning programs disruptive of family values” and instructed the courts to resolve family disputes “with the aim of strengthening and stabilizing the family.”

In what appears to be a recommendation for a division of labor, Ayatollah Khamenei said that government policy should encourage respect for “the blessing” of the role of women as mothers and homemakers and the role of fathers as economic providers. He also called for support for single women who are heads of households as well as “facilitation and encouragement for them to marry.”

But the leaders of the Islamic Republic remain obsessed with the “women’s issue”: how to handle a younger generation that is increasingly assertive; bold; and hungry for education, professional employment, and engagement with the world.

This is not the first time Ayatollah Khamenei has addressed the issue of women within the Islamic Republic. Largely at his behest two years ago, Iran’s government suspended a highly effective birth control program through which people had access to free counseling, contraceptives, and even subsidized vasectomies. Then, the supreme leader was acting in the face of declining birth rates; he appears to believe that national power stems from a large population. On Women’s Day in Iran two years ago, he declared that “one of the biggest intellectual mistakes of the West about the issue of women is gender equality.” Men’s work should be left to men and women’s work to women, he said.

After the Islamic Republic was established 37 years ago, the state stripped women of rights they had gained under the monarchy and sought to dictate the way women dress, walk, and talk; what they study; where they work; and with whom they associate in public and in private. Women have endured harassment, imprisonment, floggings and stonings yet still have fought back and regained a modest measure of rights. But the leaders of the Islamic Republic remain obsessed with the “women’s issue”: how to handle a younger generation that is increasingly assertive; bold; and hungry for education, professional employment, and engagement with the world.

This declaration, though clothed in language about the sanctity of family and family values, is calling on government institutions to implement laws and policies, including employment practices, under which women would revert to their traditional roles as mothers and homemakers. His policy guidelines will be unwelcome news to a large segment of Iranian women, young and old, conservative and progressive.

Ayatollah Khamenei is concerned about more than declining birth rates. He dreams of an Iranian population of 150 million, nearly twice the size of today’s 80 million. Divorce rates in Iran are not inordinately high, but they are rising. They climbed from about 94,000 in 2006 to some 163,000 in 2015. There are other, unspoken anxieties. Women are winning more places at university than men in national entrance exams. They are successfully competing with men for better-paying jobs. The practice of “white marriages”—in which couples live together without marrying–is growing, though clerics have denounced it. In short, the traditional roles of husbands and wives are undergoing profound change. Young Iranians seem comfortable with these developments; the traditionalists are not.

Ayatollah Khamenei’s new directives are almost certain to lead to a flurry of fresh laws and regulations stressing the importance of marriage, family, and homemaking. Officials at all levels will announce programs to realize the leader’s “sage advice.” But powerful forces of change are already underway in Iranian society. This is a tide that the supreme leader cannot reverse.

This article was originally published in the Wall Street Journal's Think Tank blog. 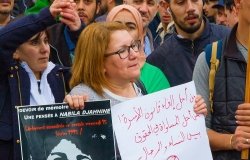 Blog post
Rule of Law
Equality Under the Law, Inequality at Home
By Kahina Bouagache on March 8, 2020