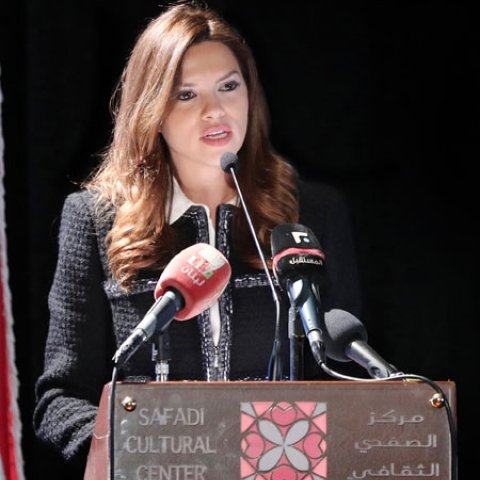 Minister of State for the Economic Empowerment of Women and Youth, Lebanon

Violette Khairallah Safadi currently serves as the Minister of State for Economic Empowerment of Women and Youth in the cabinet led by H.E. Saad Hariri, the current Prime Minister of the Lebanese Republic. Prior to her governmental appointment in 2019, she served as the Executive Director of the Safadi Group Holding where she managed and oversaw work related to several companies involved in different sectors, including aviation, real estate and trade. Between 2000 and 2011, Safadi worked as a TV presenter at the Lebanese Broadcasting Corporation (LBC) and then as a news anchor and political host at Murr Television (MTV). She honed her talents in public affairs as a consultant in the Ministry of Economy and Trade between 2010 and 2011 and then in the Ministry of Finance between 2011 and 2013.

Violette’s activities in the nonprofit sector focus on improving the livelihoods of vulnerable populations through her capacity as President of the Safadi Cultural Foundation and as                  Vice-President of Safadi Foundation. These development-focused organizations focus on creating economic opportunities, women’s empowerment and education and training.  In conjunction, she has expanded the outreach of cultural events of the Safadi Cultural Center, which she currently heads, to be more inclusive of local demographics including age, gender and ethnicity.

Violette is a member of The National Commission of Lebanese Women (NCLW) established by the Council of Ministers; a member of Board of Trustees at Notre Dame University-Louaize; Vice President of the Autism Awareness Association in Lebanon; and a member of the Leadership Board of Women and Public Policy Program at Harvard Kennedy School.

She is a strong believer that attitude and emotional intelligence are key factors that enable people to achieve the extra milestone in a meaningful life. Driven by her passion to spread these principles as a way to empower feminist values for other women, Violette became a trainer in Business Etiquette certified by the British School of Etiquette.

Violette is married to H.E. Mohamad Safadi, a successful businessman and former public servant. In addition, she has two children and is devoted to her family.