One of the most important issues in the 2018 elections is Brazil’s worrisome fiscal condition. At a basic level, Brazil’s fiscal challenge stems from the government’s inability to keep expenditures lower than revenue. This is partially due to a problematic pension system. In Brazil, pension expenditures consume a disproportionately large portion of the budget, which reduces the government’s capacity to invest in infrastructure, education, health, and other areas in need of funding. According to the Brazilian Senate’s Independent Fiscal Institution, although Brazil spent roughly 9 percent of total GDP on pensions in 2017, it was only able to invest 2 percent in the country itself. This disparity is partially the result of generous pension benefits for civil servants; according to the World Bank, the civil service pension system ran a deficit of 1.4 percent of GDP in 2017.

As the Brazilian population ages in the coming years, pension expenses will only increase. Without significant pension reform, Brazil will break its constitutional “golden rule”, which prohibits increasing federal debt for the sake of financing the government. By 2019, government expenses are projected to exceed the spending cap imposed via a constitutional amendment in 2017. Such fiscal instability could result in a public debt exceeding 100 percent of GDP, thereby limiting Brazil’s ability to grow and to invest in itself. Some experts predict that failure to resolve the impending pension crisis would not simply limit growth, but would result in a severe economic recession.

In addition to pension reform, important fiscal issues include tax reform and the privatization of state-owned enterprises. Brazil is one of the highest-taxed nations in the world, and ranks 153rd out of 180 countries on the Heritage Foundation Index of Economic Freedom. Excessive taxes, along with onerous regulations and over-saturated bureaucratic processes, limit business growth in Brazil, as demonstrated by the nation’s low rating in the World Bank’s “Doing Business” project. In addition, in a time of growing deficits, several candidates are discussing the possibility of privatizing state-owned enterprises such as the Bank of Brazil and the government’s controlling stake in Petrobras. However, polls show that 7 out of 10 Brazilians oppose privatization.

Given the high stakes of Brazil’s fiscal situation, and the diversity of opinions regarding potential solutions, the upcoming elections have significant implications for Brazil’s economic future. Nonetheless, whether Brazilian voters will take fiscal issues into consideration as they head to the polls in October remains to be seen.

The Case for Pension Reform in Brazil: An Unequal and Exhausted Retirement System on the Verge of Collapse 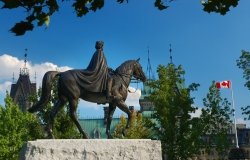 Article
Governance
The Queen is dead. Time for Canada to talk about becoming a Republic. We owe it to ourselves
By Andrew Cohen on September 20, 2022