Former Chair of Wilson Center Board Nominated as Ambassador to Israel

WASHINGTON – The White House announced the nomination of former Chair of the Board of Trustees of The Woodrow Wilson International Center for Scholars, Thomas R. Nides, as the next United States Ambassador to Israel.

“On behalf of the Wilson Center, we would like to congratulate Tom Nides for being nominated to serve as the U.S. Ambassador to Israel. Tom’s influence is still felt around the Center. His tenure as Chair saw a substantial expansion of areas where our unique skillset bridges the gap between the world of ideas and the world of policy,” said Ambassador Mark Green, Wilson Center President and CEO. “The entire Wilson Center  community wishes him well  for his nomination."

President Obama appointed Nides to be Chair of the Wilson Board in September 2013 and he served until August 2017.

Prior to his posting, Nides was a Managing Director and Vice Chairman of Morgan Stanley, a leading global financial services firm. He previously served as Deputy Secretary of State, as Chief Operating Officer of the Department. 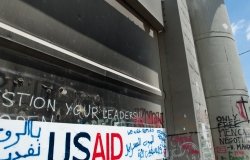