How to Boost Border Competitiveness? Just Ask the Folks There.

For years, the United States’ southern border with Mexico has provoked a range of fears, from terrorism and drugs to overwhelming numbers of unauthorized immigrants, prompting a security-first and often security-only approach to border management. Fear-based rhetoric may resonate in the echo chambers of Washington DC, but it feels wholly out of touch to most (though not all) residents of border communities.

Thankfully, with U.S.-Mexico trade at historic highs and growing faster than trade with any other major trading partner, it is increasingly difficult to ignore the importance of safe and efficient border management to the regional economy. U.S.-Mexico trade is now valued at well over a half trillion dollars per year, 80 percent of which crosses the U.S.-Mexico land border. This trade supports around six million U.S. jobs, and systems of co-production in manufacturing allow companies to combine the comparative advantages of the United States and Mexico, boosting the competitiveness of North America as a whole.

These trends are leading some political leaders to the realization that many in the border region have known for years: the border itself creates a lot of economic opportunity for both nations. And these folks in the border region—popularly imagined to be barely hanging on in a hail of gunfire, even on the sleepy U.S. side—are careful observers of what works and what does not work in terms of trade and economic development. Knowing this, we joined several other organizations in a year-long deep dive into the inner workings of the U.S.-Mexico border economy. But then even we were surprised by the sheer number, variety and magnitude of ideas emanating from this enormous, misunderstood and underappreciated region.

From the four forums held in the border region throughout 2014, we compiled 27 ways to strengthen border competitiveness (full list on pp. 19-20 of the report). They range from support for regional institutions to infrastructure upgrades to investments in the region’s human capital. Seven of the top ideas are described below.

Economic development groups in the border region have at times become a bit too parochial for their own good. Of course, it is true that border communities sometimes compete for investment, the development of trade routes, and scarce federal funding for infrastructure. Nonetheless, they also have numerous common interests, and collaborative binational economic development and investment promotion based on sound research is the best way to develop a good business case for public- and private-sector investment across a region. This approach can not only bridge cross-border gaps but also address long-standing economic disparities between large and small communities in a given region, which is characteristic of the border region as a whole. The CaliBaja Mega Region—which, through robust research, has gained a broad consensus among numerous economic development organizations—can now serve as an example to other parts of the border region.

2.     Utilize public private partnerships for funding of port of entry infrastructure and staffing.

U.S.-Mexico trade has grown six-fold since NAFTA was implemented in 1994, but border crossings and transportation infrastructure have not kept pace. A few years ago, U.S. Customs and Border Protection recognized a need for an additional six billion dollars of infrastructure investment at the U.S.-Mexico border crossings, and non-governmental studies show the U.S. and Mexican economies lose out on several billion dollars of economic growth each year as a result of excessive congestion at the border. Still, with federal budgets under increasing stress, few believed government would be able to meet the funding needs. Increasingly, government and businesses alike have looked to local governments and the private sector to fill in the shortfalls in border infrastructure spending.

We believe that all levels of government, as well as the business community and non-governmental organizations, have a role to play in supporting cross-border transportation infrastructure and staffing. New federal legislation (known as section 560 and 559 authority) offers state and local government and the private sector a new framework through which to get involved in the funding of port of entry infrastructure and staffing. Beyond these specific mechanisms, history suggests there is a wide array of options —including private and municipal ownership, local donations to federal agencies, and collaborative planning processes—for non-federal participation in the improvement of cross-border transportation. Mexico has a solid framework for public-private partnerships at the federal level, although many states still require their own implementing legislation to take advantage of alternative infrastructure financing mechanisms.

Trusted traveler programs are the most cost effective way to improve border efficiency and security, but they need to be expanded and more aggressively promoted. Through these programs (SENTRI, C-TPAT, FAST, Global Entry, NEEC), individuals and companies go through an extensive vetting process and commit to extra security measures in exchange for expedited border crossings. Security is improved because border officials can focus their attention on traffic that presents a higher or unknown level of risk, and efficiency is improved because trusted travelers move across the border faster. Despite the recognized value of these programs, government does not fully take advantage of them. To boost enrollment levels to their full potential, improvements are needed in the programs. Most importantly, the U.S. and Mexican governments must extend dedicated and separated trusted traveler and shipper lanes as far back as traffic extends on a busy day, because getting to skip ahead of the last twenty minutes of traffic is worth little if you had to wait in traffic for an hour before getting to the express lane.

The U.S. and Mexican border states are already home to more than 90 million people, and the region is growing faster than the national averages of both the United States and Mexico. This growth was really never planned; the vast metroplexes of San Diego/Tijuana and El Paso/Ciudad Juarez are a testament to this. But it is not too late to derive benefits from smart planning. To facilitate economic development and improve quality of life in border cities, greater binational policy and planning coordination is needed at the municipal level. Urban area growth on one side of the border inevitably has significant implications on the other—why then do twin cities not co-create joint development plans, anticipating the utility, transportation infrastructure, port of entry, and other needs of such development? In doing so, local governments could also seek out joint opportunities for business and industrial park development, understanding that retail, cultural events, and industry all depend on cross-border movements. In some cases, significant financial savings might be achieved by pooling resources across the border.

5.     Boost educational exchange between the United States and Mexico and strengthen human capital in the border region.

The border economy may have grown up with the maquiladora industry’s traditional focus on low cost assembly, but rapid growth in East Asia and elsewhere has pulled many low skilled jobs out of the region. Though this caused some pain as it happened during the early 2000s, it has forced border region manufacturers to focus on their long-term comparative advantage—proximity to the vast U.S. market—and to move up the value chain into more advanced manufacturing. In this context, companies will invest in the region not because of the supply of cheap labor but because of the availability of adequate talent, putting a premium on education.

In recognition of this, education has recently become a key component of  the bilateral agenda, setting ambitious goals to increase levels of educational exchange between both countries as a means of developing a bilingual and world-class workforce comfortable doing business in an era of globalization. This exchange is already happening in the border region; indeed, half of all Mexican students studying in the United States go to Arizona, New Mexico and Texas alone. So why not focus efforts where they are most likely to succeed? The border is a natural, necessary, and cost effective place for this exchange to happen, and, as such, the federal governments should significantly increase their focus—in collaboration with state governments and higher education systems—on boosting educational exchange in the border region. Last year, a meeting of the bilateral initiative to promote student exchange was held in El Paso, Texas with a focus on the border. From that starting point, concrete programs to enhance exchange must be developed.

While oil prices have dropped by up to 50 percent in recent months, the development of the Eagle Ford shale in south Texas and the potential development of these resources in northeastern Mexico and New Mexico represent significant opportunities for economic development. Energy development leads to skyrocketing demand for certain skills, ranging from engineers to commercially licensed truck drivers. When local institutions partner with industry to meet those needs, jobs become plentiful for the local population. At the same time, however, this development places strain on natural resources and raises wages outside of the energy industries. To capitalize on and properly manage energy development, the various levels of government, as well as the business community, civil society, and educational institutions, need to open channels for dialogue and partnership—ideally months or, better yet, years before projects are underway.

The enormity of the almost 2,000 mile-long border region creates significant institutional challenges. Two federal governments, 10 state governments and dozens of local jurisdictions all have a different perspective on how the U.S.-Mexico border should operate.

The U.S.-Mexico Border Governors Conference needs particular attention. Without a doubt, a gathering with 10 border state governors (from California, Arizona, New Mexico, Texas, Baja California, Sonora, Chihuahua, Nuevo León, Coahuila and Tamaulipas) has the potential to pack significant political force and influence federal policy. However, since Arizona cancelled its 2010 meeting in the wake of the SB 1070 controversy, the Conference has fallen on hard times. Despite a trajectory that stretches back decades, the group has failed to meet for the past two years. Compounding the political issues are fundamental questions of resources and staffing: the Conference itself has no resources but instead relies on a different state and its staff each year for organization and funding. If border states want their collective voice heard in Washington and Mexico City, the Conference needs a permanent secretariat and a renewed commitment to hold annual meetings.

At the core, the U.S.-Mexico border is not a risk but an opportunity. It is the coming together of two very large and diverse nations and economies. As a result, the border is unique. It has a special energy, culture, and set of economic advantages not found anywhere else in the world. Unfortunately, for too long, misperceptions about the border have crippled our ability to capitalize on the strengths of the region. With trade and investment on the rise, it is time to start listening to those who know the border best, the people who live and do business there every day.

Christopher Wilson is Senior Associate at the Mexico Institute of the Wilson Center, where he directs the Institute's work on U.S.-Mexico economic relations and border affairs.Erik Lee is Executive Director of the North American Research Partnership, a think tank based in Arizona and California.

This article was originally published on Forbes.com 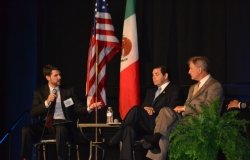 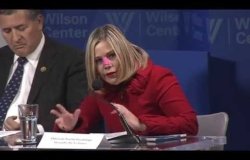