Immigration and Border Security in the Age of Trump

Wall or no wall, Mexico, the United States, and Central America face a migration crisis that will only continue to worsen. Tens of thousands of people—in particular from Honduras, El Salvador, and Guatemala—are being pushed out of their countries and towards the United States by a toxic combination of extreme violence, poverty, and lack of economic opportunities. At the same time, in the past few years, Mexico has been feeling the pressure of mass deportations as well as greater numbers of Central American migrants transiting through its territory or staying to work in their quest for a better and more secure life. Mexico has also been experiencing higher levels of insecurity and the negative effects of closer cooperation between migrant smugglers and organized crime.

Such a crisis is also the result of inadequate security and regional immigration policies. The situation could deteriorate even further since President Trump signed an executive order during his first week as president authorizing the construction of a formidable, 1,900 mile-long border wall to replace the incomplete and heterogeneous fence that now runs along a fraction of the U.S.-Mexico border. Contracts for the proposed border wall with Mexico are said to be awarded by April. Trump also signed executive orders increasing the number of border patrol agents by 5,000, tripling resources for the immigration officers, and targeting so-called “sanctuary cities” for immigrants.

If implemented as planned (and that remains to be seen), Trump’s measures are sure to increase deportations of undocumented immigrants, heightening tensions within the U.S. and with Mexico. The timing of the announcement—the same day Mexican negotiators sat down with U.S. officials to set an agenda for difficult trade talks—was seen as insult piled on injury by most Mexicans, and led to the postponement of a planned meeting between Mexican President Enrique Pena Nieto and President Trump, plunging the two countries into their worst diplomatic crisis in decades. Aside from the economic and political impact of the deterioration in relations between the Trump administration and Mexico, geography dictates that Mexico—caught between two forces—will be most affected by the continuing immigration crisis, although the United States will suffer as well.

We must accept that increased border enforcement by both the United States and Mexico has not worked. Despite the hyper-dangerous journey that awaits Central American migrants and the massive deportations carried out by the Obama Administration, tens of thousands of people, including many unaccompanied minors, leave Central America’s dangerous Northern Triangle (Honduras, El Salvador and Guatemala) with the hope of finding a job, escaping from violence, or reuniting with family members now working in the United States. Violence and lack of economic opportunities in Central America will continue to push migrants to the North. It’s likely that, with or without a wall, undocumented migrants will continue to enter the United States. Some will stay in Mexico while others will continue their journey to Canada, but the reality is that as long as a demand exists for jobs that only these people are willing to perform, desperate undocumented migrants—and their smugglers—will find innovative ways to make it to America and participate in its irregular labor markets.

Though the current migration crisis began years ago, it became more visible in 2014 and has not yet abated. Apprehensions this past fiscal year rose approximately a quarter from 2015 levels, reaching more than 400,000 people along the southwest border with Mexico. In 2016, apprehension numbers surpassed the previous year’s peak. Last August, for example, nearly 37,500 people were apprehended, “the highest recorded number for that month since 2009.” In the meantime, the demographics of undocumented migrants coming through the United States’. Southern border have changed significantly. Fewer Mexicans and single adults are attempting to enter the United States, yet more families and unaccompanied minors fleeing from poverty and extreme violence in Central America are attempting the trip north.

Ironically, restrictive immigration policies and increased border enforcement in the United States and Mexico seem to have had the unintended consequence of strengthening international migrant smuggling networks. In recent years, coyotes (smugglers) have operated less on a primitive, independent basis and instead have created sophisticated transnational networks. The new capacities and strength of such networks became visible in 2014 during the so-called “crisis of unaccompanied minors.” Transnational smugglers proved then to be both extremely well-organized and well aware of the failures and weak points of the U.S. immigration system. They demonstrated a remarkable capacity to mobilize thousands of unaccompanied minors simultaneously, utilizing new methods and alliances with organized crime in what has become a multi-million dollar industry.

In the past decade and a half, the Border Patrol has more than doubled its number of agents. At the same time, the U.S. Congress has massively expanded spending on fencing, infrastructure, and technology to secure the border. Mexico has supported the massive U.S. deportation efforts with its Southern Border Plan (Plan Frontera Sur). However, transnational networks of migrant smugglers and drug traffickers seem to operate very effectively in these allegedly more secure and militarized borders. The new U.S. administration’s migration plan does not seem to represent a change but, rather, promises a continuation and reinforcement of current trends, both in terms of policies and deficient results.

As Mexico faces tough trade negotiations with the U.S., many commentators, legislators, social leaders, and other influential Mexicans are urging the Mexican government to take a hard line with the Trump Administration on trade talks. Among other things, they are advising that Mexico suspend cooperation with the United States on immigration, an action that could lead to an even higher number of migrants eventually ending up in the United States even as the wall is built.

The current trends in migration and border enforcement have represented a significant cost for Mexico. While the goal of most Central American migrants is to enter the U.S. job market, greater numbers are now staying in Mexico. The magnitude of this change is reflected in the recent trends in asylum applications. According to a December 2016 Reuters article, Mexican authorities expected to receive about 8,000 asylum applications last year, more than double the 3,424 applications registered in 2015. Officials predict that this number will explode and that Mexico will receive about 22,500 applications by the end of 2017, if the trend of a nine percent monthly increase in applications continues.

These figures give us an idea of the number of undocumented Central American migrants who can be expected to enter and stay in Mexico in the near future. These numbers will likely increase considering that President Trump has so far kept his oft-stated promise of aggressive border enforcement. Trump’s constant attacks on Mexico’s trade treaty with the United States have already caused potential foreign and national investors to put development projects on hold. This de facto investment freeze could put unprecedented pressure on the country’s economy and worsen the already precarious security conditions that hold sway in large parts of Mexico’s national territory where the rule of law is spotty at best. In 2016, Mexicans migrating back to their country from the U.S. outnumbered migrants heading north. However, a deterioration of Mexico’s economic and social conditions could push a new wave of Mexican immigrants north, reversing this trend.

Mexico has had little say in regional migration policies but has nevertheless paid a high price for their enforcement. Historically, most key decisions have been made unilaterally by the United States. In this regard, the future does not seem to augur change. As we have seen in the first few days of the new administration, the negotiation of a comprehensive immigration agreement between the United States and Mexico seems totally unattainable. Mexico is indeed paying the price and facing the consequences of U.S. immigration policies. It is not unreasonable to believe what President Trump has suggested: that Mexico will pay for his “big, beautiful, impenetrable” wall, or at least for part of it. Wall or no wall, Mexico will be paying for the United States’ decisions on immigration and border security.

Thus, Mexico appears to be caught in the middle of an extremely difficult situation. From the south, it is pressured by Central America’s extreme poverty and violence. From the north, it faces tougher, more militarized U.S. border enforcement. The result: more migrants, caught in a vise, are staying in Mexico, though the country does not have the capacity to effectively incorporate them into its formal economy. Such a situation will certainly be worsened by massive deportations from the United States to Mexico of people with no family networks, no resources, and no future in a country they do not know or hardly recognize.

Under this kind of institutional stress, Mexico could very well face a spike in violent crime and human rights violations in major cities receiving deportees, at the border, and along the migration routes. Transnational criminal organizations and alliances between criminal groups and corrupt government authorities within Mexico, as well as outside its borders, could be further strengthened. What is more, the billions spent on building walls and on harsher immigration enforcement will not stop desperate people from entering the United States as long as the U.S. economy continues to foster a demand for the type of labor that Mexicans and Central American migrants can provide.

Why add to the same bad policies that have proven ineffective in stopping migration flows and that encourage human rights violations? Perhaps the countries involved should concentrate their efforts on reducing labor demand for Central Americans in the United States by reinforcing labor requirements or through E-Verify programs. Their actions should also focus on promoting security and economic development, as well as on strengthening long-term investments in the region that would create jobs and security in Central America, stemming the endless tide of immigrants heading relentlessly for the Rio Grande.

Mexico, in the quest for its national interest, should also be thinking of creative and more dignified forms of negotiating with its northern neighbor. Rather than halting efforts, the Mexican government could offer further cooperation to stop illegal flows of drugs and dismantle migrant smuggling networks in exchange for a greater number of temporary working visas and a path towards citizenship for those Mexicans who have given the United States the most productive years of their lives. The continuation of NAFTA and the deferred deportation of young, productive, undocumented Mexican migrants should not be accepted as the sole bargaining chip in light of the enormous effort and cost that Mexico has absorbed and will continue to pay for contributing to the prosperity and security of the United States of America. 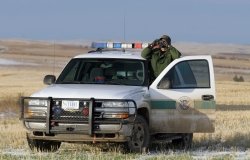