Iran’s clerical-dominated state has launched a new campaign to impose the Islamic dress code on women. They are also trying to roll back women’s other hard-won freedoms in matters of economic participation, social behavior and public presence. This appears to be part of a larger and broader crackdown--on journalists, intellectuals and artists—and reflects either a heightened sense of insecurity, or the opposite of that—overconfidence—on the part of the Islamic Republic.

With the full support of the Supreme Leader, Ayatollah Khamenei, the government designated Tuesday, July 12 as the day of “Hijab and Chastity.” Many women have gradually and successfully made their way from the total hijab to discarding it altogether in the public space, a development that discomfited Mr. Khamenei. Like many other high officials, he conveniently labelled the shift a plot by foreigners to undermine the Islamic Republic.

President Ebrahim Raisi has advocated for a return to strict observation of the hijab as in the early days of the Islamic revolution.

Since he took office last year, President Ebrahim Raisi has advocated for a return to strict observation of the hijab as in the early days of the Islamic revolution. He recently ordered the High Council of the Cultural Revolution, a government body, to revive and implement a resolution passed in 2005 regarding women’s hijab and chastity, which had not been implemented by his predecessors.

As the news of these new measures spread, women across the country took to social media with the slogan Hejab bi Hejab, or  “No to Hijab,” an echo of the struggle for freedom from dictates by the state that women have waged since the establishment of the Islamic Republic 43 years ago. It has been a long struggle.

One of the first measures of the newly-established Islamic Republic was the requirement that women observe the Islamic dress code in public. Thousands of women poured out into the street on March 8, 1979, to protest this new measure, announced the previous day by the government. The demonstrators were attacked by vigilantes. Eventually, in a sort of uneasy compromise, rather than the traditional and full head-to-ankle veil, women were left alone as long as they wore a long baggy coat, the manteau, and a hood-like head cover, the maghna’e. This proved to be only the first of an across-the-board assault on women’s rights.

The government suspended the Family Protection Law, the most important piece of legislation passed under the monarchy regarding women’s rights. Among other rights, the law gave women the right to seek a divorce and to gain child custody; and it raised the age of marriage to 18 for girls. The government also disbanded the family courts established under the monarchy to deal with family disputes. Women lost the right to seek a divorce and the age of marriage was lowered to nine, or at puberty, in keeping with Islamic law. Women were purged from decision-making positions in government offices. Male teachers were barred from teaching in girl’s schools, and women were barred from a number of fields of study at universities. Female and male students were separated in classrooms and could no longer study together in libraries. Women and men who were not related to one another were not allowed to appear in public together. The law of retribution became the law of the land. Women were flogged for not observing the hijab; stoning for adultery became the law of the land.

Parliament has even toyed with the idea of affirmative action where university entrance is concerned —for men.

Faced with these and other restrictions, women decided not to rely on some eventual show of generosity from the Islamic government but to take matters into their own hands. It has been hard work, but the perseverance has paid off. It took ten years to raise the age of marriage from nine to 13; the family courts are back, albeit with a narrower mandate; and child custody is not automatically denied to the mother. Women still cannot become judges, but they appear in court as lawyers. Universities are not only accessible to women, but in nationwide entrance exams, more women gain entrance than men—a development that leaves the government uneasy. Parliament has even toyed with the idea of affirmative action where university entrance is concerned —for men.

Women now sit as deputies in Parliament and hold senior positions in ministries; there have been female vice presidents. Women are also active in the private sector and run small and large businesses. Nor have women shied away from demonstrations protesting government repression and shortcomings that have taken place in towns and cities across the country in the last decade and more. Arrest, imprisonment, and the risk of injury has neither deterred nor silenced them.

Yet it is baffling that the government of President Raisi has picked this particular moment, when the government is facing sanctions, strained relations with its Arab neighbors, the hostility of Israel and the US and a host of other problems, to once again try to impose the traditional hijab and to battle what his officials call“bad hejabi,”  or indifference to strict observance of the hijab. True, in recent years a number of women, especially in the younger generation, have been discarding or pushing back against the headdress at a rapid pace. The hood has become a scarf, and the scarf has fallen back from the head to the shoulders. Young women’s drab, baggy long coats have grown shorter and shorter, tighter and tighter, and in all the colors of the rainbow.

Women post their pictures on social media, exposing their hair; they remove their scarves in public  and post videos of themselves doing so. They mix with men in coffee shops, restaurants, movie theaters, and other public places. Thanks to social media, the younger generations are not isolated from the rest of the world; and these children of the revolution have shown they are fed up living under restrictions that don’t exist in neighboring countries and the western world.

Officials and government media have accused women who defy or campaign against the hijab of being in the pay of the foreign enemies of Iran.

This has been the prevailing situation for a number of years. Yet a few days ago, government officials - or at least a number of them - announced that women and men should not mix in government offices or public places, and that banks and public institutions should not allow women without the proper hijab on their premises. Officials and government media have accused women who defy or campaign against the hijab of being in the pay of the foreign enemies of Iran.

How to explain this sudden and unexpected refocus on the near dormant hijab issue? It is possible we are simply witnessing the influence of the ultra-conservative President Raisi. It is also possible that the government, facing a host of problems and growing public discontent, wants to focus public attention somewhere else, although in this case scapegoating ‘foreign plots and foreign enemies’ and accusing women of being in their pay is so transparent an obfuscation as to be laughable. The parallel crackdown on journalists, writers, and filmmakers may suggest that an out-of-touch government feels it need not tolerate any hint of opposition anymore.

The authorities may blame foreign elements as instigators of the anti-hijab movement, but they know better than anyone else this is an indigenous movement of Iranian women who want the right to choose what to wear and who refuse to be dictated to. 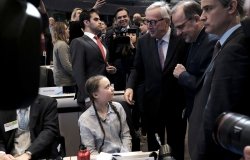