Words and exhortations can inspire; to become calls to action they must embrace realizable visions of a new future. What, we may ask, would an “inclusive, safe, resilient and sustainable” city look like? One answer emerges from the once “suburban” county of Arlington, Virginia across the river from Washington, D.C.

On September 25, 2015, the United Nations adopted 17 Sustainable Development Goals intended to shape UN and other international development strategies and agendas over the next 15 years.  The goals replace the previous Millennium Development Goals adopted in 2000 to provide a roadmap for engagement with the globe’s most vexing development challenges in a holistic manner.

Words and exhortations can inspire; to become calls to action they must embrace realizable visions of a new future.  What, we may ask, would an “inclusive, safe, resilient and sustainable” city look like?  One answer emerges from the once “suburban” county of Arlington, Virginia across the river from Washington, D.C.

With more than 200,000 residents, Arlington is a small city embedded in a larger metropolitan region which, over the course of the last half century or so, has been transformed from a suburb that was home to segregated populations of Southern whites and blacks to an increasingly urbanized community in which no racial or ethnic group constitutes a minority.

Arlington, in other words, is at the forefront of demographic processes which are changing the face of American communities as well as the United States in its entirety.  Arlington is doing so with relatively little rancor as well as with improving economic opportunities and advancements, achieving low crime rates and far-reaching transportation opportunities. Arlington, in other words, reveals how an “inclusive, safe, resilient and sustainable” city looks.

You don’t have to travel to Arlington to see what has happened.  The Columbia Pike Documentation Project’s new volume, Living Diversity, features the works of five remarkable photographers – Lloyd Wolf, Duy Tran, Paula Endo, Xang Mimi Ho, and Aleksandra Lagkueva – who capture the dignified yet casual interaction of people with great cultural differences living next to one another.  Inspired by Lloyd – the son of German immigrants who recalls growing up in Arlington when it was White, Black, and segregated – the photographers reveal that it is possible for people of great difference to be neighbors; and to thrive as they do.  This is an important lesson at a time when the world appears to be awash with cities that are divisive, dangerous, vulnerable, and fragile instead of realizing the UN’s goal of inclusive safe, resilient and sustainable.

Chartered by an Act of Congress in 1810, the roughly five-mile long Columbia Pike was once a main approach to Washington from the South.  Cut off from direct access to the Nation’s Capital by the construction of the Pentagon in the 1940s, bypassed by larger more ambitious roads as well as by the Washington Metro System, the Pike remained a corridor of affordable housing and small businesses.

The area began to change rapidly following the fall of Saigon, as those fleeing Communist regimes in Vietnam and neighboring Southeast Asian nations made their way to Arlington.  They were followed by Central Americans and Africans fleeing brutal civil wars.  Often times, neighbors coexisting peacefully along Columbia Pike had been combatants in wars back home.  There was little reason to believe urban harmony was even possible.  Yet, even then, other groups followed, settling their homes and businesses in the area.

The neighborhood’s primary zip code – 22204 – is home to 51,262 residents just over half of whom are white, just under one-fifth Black, and over a quarter Hispanic.  A mix of Asians, biracial residents, American Indians, and Hawaiians constitute a multicultural balance.  Immigration specialists Audrey Singer of the Brookings Institution and Marie Price of George Washington University rank Columbia Pike’s eclectic and hyper-diversity as among the most culturally varied neighborhoods on earth.

As Singer and Price note, Columbia Pike’s micro-ecosystem is ideal for immigrants to the United States.  “Like earlier residents,” they observe, “these newcomers settled along the Pike because of its proximity to the urban core, employment opportunities, and relatively inexpensive rental housing.  They came from El Salvador, Vietnam, Bolivia, Ethiopia, Peru, and the Philippines.  Today, most of these countries-of-origin are still represented along the Pike, but immigrants from South Asia (India, Bangladesh and Pakistan) as well as Mexicans and Guatemalans have joined them, creating an ever-changing ethnic landscape along Columbia Pike.”

An important challenge for Arlington – and any urban community trying to follow the UN’s guidance to become “inclusive, safe, resilient, and sustainable” -- is that cities are ever-changing.  The communities around Columbia Pike are dramatically different from what they once were within single lifetimes.  People not only have to adjust to one another, they have to do so within an environment that is continuously evolving.

The ability to constantly recalibrate policies became an underlying component of Arlington’s success at responding to rapid demographic change. Columbia Pike’s diversity was never planned or foreseen.  Local authorities amplified the credits accrued from of hyper-density—and minimized the debits—by respecting and granting dignity to each new community.  The county’s tolerance and welcoming ethos cultivated a “go-along, get along way of life” which enabled new-comers to grasp opportunities which enriched the community in turn.  In this way, the lessons of Columbia Pike are universal.

In one of the Living Diversity’s many interviews, Cairo-born Dahlia Constantine exclaims, “This neighborhood is diversity nutso… Different blocks have different ethnic mixes.”  In contrast to diversity in California, she continues “here there are many layers of diversity.”  Urban communities that are as inclusive, safe, resilient, and sustainable as the UN aspires to nurture are going to be those which adapt to the unevenness of deeply layered and complex urban life.

Now that a majority of the world’s population lives in cities, humans have become a human species.  Our future depends on ability to convert the UN mantra of building inclusive, safe, resilient, and sustainable communities.  As Living Diversity elegantly illustrates, there is no better way to begin that journey than with a walk down Columbia Pike. 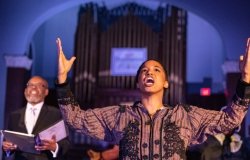