Losing Newtok: A Story of Climate Change in Alaska

Imagine leaving your town and wondering if it will still be there when you return. That disturbing scenario is the reality for some 450 residents of Newtok, Alaska, as the permafrost beneath the village continues to melt due to climate change and coastal erosion proceeds at a rapid pace. While it appears there is no way to avoid the eventual loss of Newtok, efforts are under way to preserve the community’s way of life, as residents relocate to more solid ground upriver. The village’s relocation coordinator, Romy Cadiente, shares the story of what climate change is doing to Newtok and its people and describes the challenges involved in moving an entire community. He is joined by Wilson Center Polar Initiative Director Mike Sfraga for this special edition of Wilson Center NOW.

Romy Cadiente serves as relocation coordinator for the village of Newtok, Alaska.

Mike Sfraga is director of the Wilson Center’s Polar Initiative. 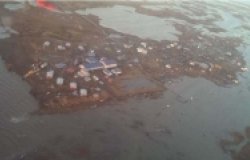