It’s brutal to have to follow Aaron, I don’t have a story. You know, I think I can answer the Ukraine question as well, which is very short.

One, absolutely we need to recognize what is at stake in the various conflicts in which Russia is playing a role, including Ukraine, but also Syria, and what we have treated for a very long time as “frozen conflicts” in the post-Soviet space. I really, really hope we can be over that, and remember that no conflict is ever frozen -- again, I’d point to the Balkans, that seems to be heating up again as well. So just recognize what’s at stake here, and part of what is at stake, which will be my second point, is the need to really think about what global order means -- not necessarily “The Liberal International Order” as if there’s a preexisting thing that we invented and that we own, and that can exist on its own without care and feeding. Global order is what countries do. And if we behave inconsistent with that, as we’ve done in the Middle East, if the Russians behave inconsistent with that, and if the Chinese behave inconsistent with that, guess what ladies and gentlemen: there ain’t global order.

So I think we need to think about our behaviour vis a vis these conflicts as well as the conversations we have in terms of global order. That doesn’t mean that we can throw out rules, and principled statements and sanctions and things and sit back on our laurels and say “Well we said what we thought about that and we’ll just wait you out.” Right? Because the world moves quickly and we’re watching that happen. Third, I would say the Trump campaign, the movement that he led, was incredibly good at pointing out the problems for ordinary people in the kind of global economy and the political system in which they live. Those problems are common not just to Americans, but to Russians, and Europeans, and I would imagine many others around the world. So the corollary to that is solving problems.

So the most important thing -- maybe not in the first hundred days -- but the most important thing that the new US government can do is demonstrate that Americans have figured out how to solve some problems. It’s been more or less since the Marshall Plan, I would argue, that we really persuaded the part of the world I deal with -- Europeans -- that we can solve problems. Right now most Europeans are convinced that we can’t. So I think that’s the huge challenge opportunity, and then lastly, just specifically on my narrow area, we spent the last ten years slashing federal investment in knowledge about Russia, everything from --- and the region --- everything from language, to travel and research grants, to the kind of programming that the Wilson Center is involved with, and elsewhere. I think we’re paying the price for that, and I think that can be turned around, and I think the price tag for that is the kind of money that falls off the back of the truck at the Pentagon every twenty minutes, so I’ll leave it at that. 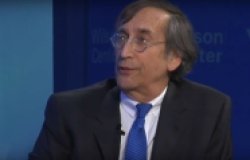 Video
U.S. Foreign Policy
Aaron David Miller on What the Trump Administration Should Focus on in the First 100 Days 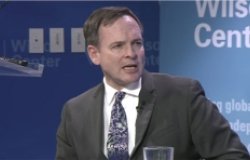 Video
U.S. Foreign Policy
Robert Daly on What the Trump Administration Should Focus on in the First 100 Days 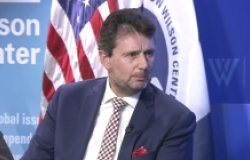