"More important than the conviction or the sentencing will be the information that Guzmán has shared with U.S. authorities. If it is reliable, then it could be employed to better understand how organized crime operates in Mexico, who the most important players are, and how best to hit the bottom line of drug trafficking organizations."

"The conviction of Joaquín Guzmán Loera will not end drug trafficking or violence in Mexico, but it sends an incredibly important message that no one, no matter how many bribes they have paid or how many hired guns they command, is above the law. This is a major victory for U.S.-Mexico law enforcement cooperation."

"This conviction is the result of many years of hard work by U.S. and Mexican authorities to bring Joaquín Guzmán Loera to justice.  Hundreds of U.S. and Mexican law enforcement and justice officials contributed to the capture, extradition, and trial of Guzmán for the terrible crimes he and his organization committed against U.S. citizens. This is an important example of what cooperation between Mexico and the United States can do to end the impunity of those who harm citizens of either country. There is much more good that can be done through this kind of collaboration."

"The capture, extradition, and conviction of Joaquín 'El Chapo' Guzmán is a high-water mark in bilateral security cooperation between the United States and Mexico. Hopefully much can be learned from this experience. It is also a reminder that illicit drugs trafficking is not simply a matter of capturing drug kingpins, as intolerably violent as they may be. It points to a deeper problem of supply and demand that is much more difficult to manage than capturing and imprisoning a drug lord like 'Chapo.' Convicting 'Chapo' is a positive step, but we can not loose sight of the bigger challenges that come with the demand for illicit drugs, the billions generated by the consumption market, and how illicit finances contribute to a weakened state." 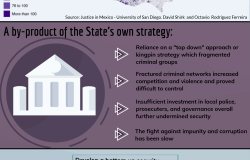 Article
Security and Defense
Infographic | Why are Homicides Increasing in Mexico?
By Nina Gordon on April 12, 2018

Article
Organized Crime
The Act of Disappearing in Mexico
By Gladys McCormick on March 5, 2018 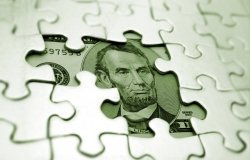