Skip to main content
Support
Explore More
Close
Article
Energy
What next for Pemex?
By Duncan Wood on February 9, 2016
Share on FacebookShare on TwitterShare via Email
SharePrint
Part of the The Expert Take
Article

In this Expert Take, Jesús Reyes Heroles discusses the leadership transition of Pemex, and financial challenges the company faces.

The recent restructuring of Petroleos Mexicanos requires a reflection on the causes. Since 1980, there have been 13 general managers with an average duration of 2 years and 9 months.

This "management" instability is not only explained by the complexities of the company and the miscalculations of its administrations; but rather, it is better explained by the applicable corporate governance framework and fumbling public policy. Over the years, it has repeatedly been observed that the regulatory framework of Pemex became sluggish and inefficient, and even the intensive energy reform of 2013 proved unable to correct this problem.

PEMEX evolved reasonably well when the federal government and the country had not yet become deeply dependent on oil revenues. However, in 1979, the exploitation of the Mega Cantarell Complex started, and the company achieved a greater financial and operational dimension. At this point, the government sought to have an opinion, to influence and even to participate in the handling of policies applicable to Pemex.  Here lies the origin of the replacement of last week.

Diagnostics and criticisms of Pemex have focused on its operational aspects, bypassing the financial aspects. The reason for this is that for the past 32 years (1983-2014), the company’s oil revenues have accounted for 4.3% of the country’s GDP per year. Who complains about this aspect? Another aspect that is often ignored is that PEMEX is one of the oil companies that has generated a higher EBITDA (Earnings Before Interest, Taxes, and Depreciation and Amortization) for many years, but the taxes and the rights that the oil company has paid the federal government have nearly always been an amount superior to its EBITDA. Therefore, Pemex generated enough resources to anchor its pension reserves. However, since the company was not permitted to anchor its pension reserves, these ended up in the public’s purse. The reform of 2013 missed the opportunity to initiate a regulation process, as it did not exclude Pemex (and CFE) from the Federal Budget. Meanwhile, Pemex has indebted itself to cover taxes.

There are several key points that are important to consider. First, due to its corporate governance and its condition as an integral company of the public sector, every strategic decision purposed by its administration has passed through at least four entities for authorization, including: its board of directors, the head of the Secretariat of Energy (SENER), the Secretariat of Finance and Public Credit, and by Congress, given that the company’s revenues are included in the Federal Budget. For example, this includes the inexplicable acquisition of two fertilizer plants.

Second, with the passing of time, the dependency of public finances from oil revenues has not decreased significantly.

Third, during different periods, PEMEX invested much less than what was necessary, due to the un-authorization of adequate investment plans from the four entities mentioned above. This explains the precarious conditions in which the national refinery system operates and the production of low-value oil derivatives that the Mexican economy no longer demands. This also explains the import of 53% of the gases required by the country and that in some periods of time the reserves replacement rate fell below 100%, due to insufficient exploration programs. Additionally, this explains why there was not a timely counter-reaction to the fall in production of Cantarell Field and why the production of hydrocarbons was reduced.

The leadership transition can only work to the extent that there is an exchange of ideas of what Pemex is and can be. 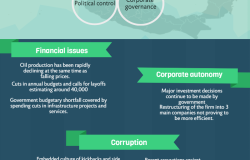 Article
Energy
Infographic | What's Next for Pemex?
By Kate Cornman on February 17, 2016