During his 2015 presidential campaign, Mauricio Macri promised “pobreza cero.” Though he was vague on his proposed strategy and timeline, the goal helped soften his image as an out-of-touch millionaire. 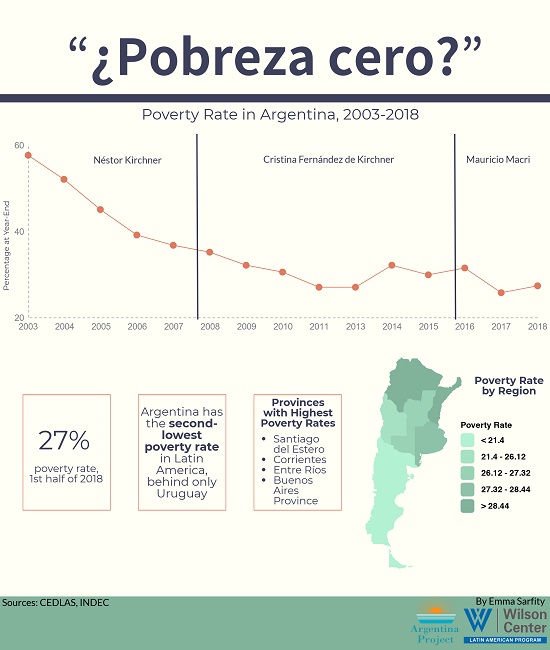 During his 2015 presidential campaign, Mauricio Macri promised “pobreza cero.” Though he was vague on his proposed strategy and timeline, the goal helped soften his image as an out-of-touch millionaire.

Mr. Macri’s slogan had other advantages. It highlighted the failure of his populist predecessor to eliminate poverty, despite staggering increases in social spending and public employment. And it drew attention to her chronic manipulation of data.

Indeed, Mr. Macri’s “pobreza cero” pledge followed President Cristina Fernández de Kirchner’s infamous Rome speech, when she said preposterously that poverty in Argentina was lower than in Germany. To back up her claim, she relied onnotoriously politicized data from INDEC, Argentina’s national statistics agency, which had been prized for its independence and professionalism prior to the Kirchner era.

Undeniably, President Néstor Kirchner logged impressive improvements – thanks to the recovery from Argentina’s 2001 economic collapse, high global commodity prices and increased social spending. However, poverty in the last years of Ms. Fernández de Kirchner’s second term began increasing starting in 2014, due to inflation and the first of many devaluations.

Over all, strong economic growth under the Kirchners helped bring poverty down from nearly 60 percent to as low as 27 percent. But that was the floor. According to data from the Socio-Economic Database for Latin America and the Caribbean – by the World Bank and the Center for Distributive, Labor and Social Studies – the Kirchners failed to reduce poverty below the level prior to neoliberal reformer Carlos Menem (1989 to 1999).

After Mr. Macri took power in late 2015, he declared a statistical emergency to allow INDEC to recover its methodological rigor. When the revamped INDEC reported the first official poverty data, poverty in Argentina stood at 32 percent. Although Argentina’s poverty line is relatively generous, the data revealed a troubling level of social exclusion and inequality that belies Buenos Aires’s image of cosmopolitan affluence.

Mr. Macri had his work cut out for him in pursuing “pobreza cero,” and the level of poverty was not the only challenge. The president’s promise to reduce poverty did not mesh with a separate goal of balancing the budget, which required austerity measures and increases in the prices of public transportation, water and natural gas.

Mr. Macri’s initial commitment to gradulismo – a slow reduction in the fiscal deficit – helped soften the blow. He expanded coverage of cash transfer programs such as the Asignación Universal por Hijo. Similarly, sensitive to the burden of inflation on poor Argentines whose informal sector wages do not keep up with rising prices, Mr. Macri created a targeted utility subsidy, known as the tarifa social. Finally, he maintained the real value of the minimum wage throughout his first two years in office, despite double-digit inflation.

As a result, the first two years of Mr. Macri’s term saw improvements in socioeconomic indicators. Income inequality did not increase, as employment grew and real salaries remained largely stable. As inflation declined and the economy recovered in Mr. Macri’s second year in office, poverty fell to 26 percent in the second half of 2017 – a six percentage point drop in only a year. By year’s end, poverty was lower than at any point during the Kirchner era.

But Mr. Macri could not repeat that performance last year. Worse, the economic carnage in 2018 began erasing Cambiemos’s modest progress toward “pobreza cero.”

After a strong performance in the October 2017 midterm elections, Mr. Macri used his political capital to pass controversial pension reforms, and accelerated utility price increases, worsening inflation. Real salaries began to lag. Then, jitters over emerging markets and fears of continued interest rate hikes in the United States led to a run on the peso. The crisis weakened the currency, increased unemployment, worsened inflation and bought Argentina to the International Monetary Fund for anhistoric bailout that turbocharged austerity.

As Argentina bid farewell to gradualismo, Mr. Macri let the value of the minimum wage slide in real terms – an important fiscal measure because government spending on social programs and teacher salaries is tied to the minimum salary. The last available INDEC data shows poverty increased to 27 percent in the first half of 2018. Private estimates for the full year put poverty at 33 percent, reversing all gains under Mr. Macri.

Argentina was not an outlier last year in this regard. The latest report by the United Nations Economic Commission for Latin America and the Caribbean shows progress at reducing poverty in Latin America has stalled and, by some measures, begun reversing. The region made important strides from 2002 to 2012, with poverty falling from 45 percent to 28 percent over all. But by 2017, poverty in Latin America had risen to 30 percent, with 20 million more Latin Americans living in poverty than in 2012.

But that regional trend is cold comfort for Argentines who have lost their hold on a middle class life due to job losses in the latest recession, or because their incomes failed to keep up with inflation or dramatic increases in utility prices. Meanwhile, Mr. Macri’s 2015 campaign request that voters judge him based on his “pobreza cero” promise has proved to be a heavy burden as he makes his pitch for reelection four years later.