On October 24, Saudi Arabia’s Crown Prince Mohammed bin Salman promised to embrace “moderate Islam” for a kingdom known for its hardline interpretation of the faith. “We want to lead normal lives, lives where our religion and our traditions translate into tolerance, so that we coexist with the world and become part of the development of the world,” he told top business and government leaders from around the world attending the Future Investment Initiative summit in Riyadh. The 32-year-old also pledged to “destroy” the ideas behind extremism and outlined the kingdom’s Vision 2030 economic plan. In the following interview, David Ottaway, a Middle East Fellow at the Woodrow Wilson Center, discusses the context and implications of the prince’s remarks.

On October 24, Saudi Arabia’s Crown Prince Mohammed bin Salman promised to embrace “moderate Islam” for a kingdom known for its hardline interpretation of the faith. “We want to lead normal lives, lives where our religion and our traditions translate into tolerance, so that we coexist with the world and become part of the development of the world,” he told top business and government leaders from around the world attending the Future Investment Initiative summit in Riyadh. The 32-year-old also pledged to “destroy” the ideas behind extremism and outlined the kingdom’s Vision 2030 economic plan.

In the following interview, David Ottaway, a Middle East Fellow at the Woodrow Wilson Center, discusses the context and implications of the prince’s remarks.

What do Mohammed bin Salman's remarks mean for Saudi Arabia and for the region?

Crown Prince Mohammed bin Salman has taken on the difficult task of rebranding Wahhabism, Saudi Arabia’s puritanical interpretation of Islam, to restore the “moderate” teachings he claims it once propounded. He has already taken steps to curb the activities of the religious police, the mutawa, and stripped them of the power to arrest alleged violators of the Wahhabi code of conduct in public places. He is promoting greater freedom of women to join the workforce and to mix in public with men at sporting events, albeit in segregated locations. And he has declared women will finally be allowed to drive cars starting in June 2018, a ban that had badly tarnished the kingdom’s international reputation and become intolerable for an increasingly well-educated Saudi female population. Saudi Arabia has also set up one center in Riyadh to combat the propaganda of the Islamic State in cyberspace and another to re-educate its own Wahhabi extremists. It has also sought to prevent Saudis from going abroad to fight for the Islamic State and imprisoned those who returned home.

Despite these laudable steps, the Saudi state still supports the export of Wahhabism around the world through the building of mosques and missionaries dedicated to spreading a highly intolerant version of Islam viewing Christians, Jews and even Muslim Sufis or Shiites as infidels and apostates. Arab and African countries where Sufism is dominant as in North Africa regard Wahhabism as the source of religious extremism that constitutes a potential security threat. So, the crown prince has his work cut out for himself to convince the Muslim world in general that Wahhabism has been misunderstood and in its true meaning is in fact “moderate.”

Why is the prince pledging to reform the kingdom now? 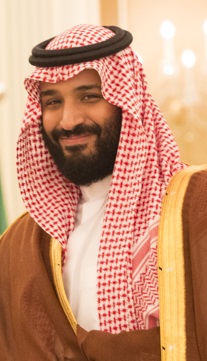 Crown Prince Mohammed bin Salman is trying to make up for lost time after two decades of leadership by a gerontocracy of tradition-bound ruling princes, all sons of the kingdom’s founding father, King Abdulaziz ibn Saud, who died in 1953. He will be the first and youngest grandson of Abdulaziz to rule the kingdom, and thus in a rush to prove his royal worth.

Saudi Arabia badly needs to undertake educational, social and economic reforms to meet the myriad challenges of the 21st century. First among these is ending the kingdom’s almost total dependence for state revenues on one export alone: oil. Former Saudi kings have talked about the need to end this dependency, and even taken a few periodic steps to do so. But so long as prices were high, there was no imperative to end the Saudi addiction to easy oil money.

Now oil prices are down to a half of what they were three years ago to around $60 a barrel, and Saudi foreign reserves have fallen from more than $700 billion (at one point the third largest of any country) to less than $500 billion. The economy is presently at a standstill, and with the world turning to battery-driven cars (Tesla is worth more General Motors now), oil no longer looks like a panacea it once indeed was. So, the crown prince has set out his “Vision 2030,” which aims to create various alternative sources of revenue to oil, principally investments in foreign assets and companies. And he wants to make the private sector rather than the state the engine of economic growth by then.

Are his goals viable?

There is much debate whether the crown prince’s goals are viable or just desert mirages. This is especially true after his recently announced plan to build an entire ultramodern new city, NEOM or “New Future,” from scratch in the far northwestern corner of Saudi Arabia where robots will supposedly do most of the work. The venture is supposed to cost $500 billion, and the crown prince is trying to incite the world’s leading information technology giants and multi-nationals to make his dream city come true.

#NEOM is when dreaming innovative minds get together #SaudiVision2030pic.twitter.com/ONVRTHDH1H

His main problem will be to overcome international skepticism stemming from other similar mega-projects that have failed to materialize or are barely functioning after tens of billions of dollars in private and government investments. In 2003, the government announced its first ambitious plan to end its oil dependency by building six industrial cities across the kingdom. Three years later, it launched the King Abdullah Financial District on the northern outskirts of Riyadh with the aim of making it the world’s fourth largest trading center. After 14 years, only one of the six industrial cities—the King Abdullah Economic City north of Jeddah on the Red Sea—is up and running, but still only at 15 percent capacity. As for the financial district, it has taken more than a decade of construction and a $8 billion government bailout to finally open for business next year.

How are his remarks related to the ongoing political transition?

Mohammed bin Salman is just 32 years old. He owes his meteoric promotion to crown prince last June entirely to his doting father, King Salman, rather than to a proven record of governance over decades once required of senior princes aspiring to kingship. The crown prince so far has no accomplishments to show in his foreign policy initiatives. On the contrary, as defense minister, a portfolio he still holds, he led the kingdom in 2015 into a war against Iranian-backed rebels in neighboring Yemen that has turned into a quagmire and left that country de facto divided in two. The kingdom’s main declared rival for regional primacy, Iran, has become entrenched in Yemen to the south and in Iraq and Syria to the north. More recently, the crown prince led three of the six Arab monarchies making up the Gulf Cooperation Council (GCC) into declaring a land, sea and air boycott on a fellow GCC member, Qatar, that risks destroying the main Saudi-built collective security bulwark against Iran.

The crown prince thus urgently needs to demonstrate some accomplishments at home to avoid a pretext for discontented older Saudi princes outmaneuvered in the competition for kingship to move against him. Prince Mohammed is generally quite popular among younger Saudis and particularly women who see him moving Saudi Arabia finally into the 21st century. But there remains a deafening silence from his royal elders who seem to be waiting for him to trip and fall. If Prince Salman can demonstrate that his ‘Vision 2030” and megacity NEOM are not just more mirages but achievable goals, then his chances for consolidating power within the House of Saud would increase enormously.

David Ottaway is a Middle East Fellow at the Woodrow Wilson International Center for Scholars and former Washington Post Correspondent. In 2008, he published The King’s Messenger: Prince Bandar bin Sultan and America’s Tangled Relationship with Saudi Arabia. Ottaway is a regular visitor to the kingdom and was last there in April 2017. His most recent book, The Arab World Upended: Revolution and Its Aftermath in Tunisia and Egypt, was published in 2017.