The Marriage and Divorce of Hamas and Hezbollah

Hamas and Hezbollah have had a dramatic break-up after the Syrian conflict erupted in 2011. Part of the break-up is due to sectarian differences; another part is due to rival regional alliances. For the wider Middle East, the Hamas-Hezbollah split is a dangerous microcosm of a growing trend.

Hamas and Hezbollah have been allies since the 1980s, when they were both founded. How is their relationship today? 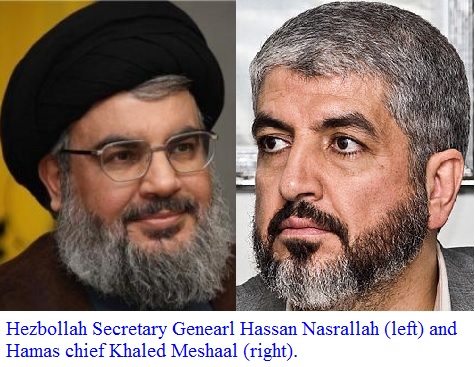 Hamas and Hezbollah have had a dramatic breakup after the Syrian conflict erupted in 2011. Part of the breakup is due to sectarian differences; another part is due to rival regional alliances. Hamas is a predominantly Sunni group. Hezbollah is overwhelmingly Shiite. The split has played out between their forces on the ground as well as between their political leaders.
Both movements—which are political parties as well as militias—have been allied with Syria and Iran since they were both founded in the 1980s. The rupture is one of the most profound shifts in Islamist politics over the past three decades.

Relations have steadily soured between the two organizations since protesters took to the streets against the regime of President Bashar Assad in March 2011. Hezbollah remained loyal to the Damascus regime, while Hamas relations with Assad eroded.
Sectarian differences began to redefine their relationship in later 2011, as the Syrian conflict devolved into a confrontation between Sunni rebels and a government led by Alawites, a Shiite offshoot. In January 2012, Hamas moved its headquarters from Syria to Qatar, which is a Sunni sheikhdom. Within weeks, Hamas leader Ismail Haniyeh formally announced support for Sunni rebels.
In early 2013, Hezbollah increased its presence in the conflict, dispatching troops to fight alongside Syrian forces. By mid-2013, Hezbollah and Hamas were reportedly fighting each other in the Syrian town of Qusayr, which is near the Lebanese border. Hezbollah fought side-by-side with the Syrian Army against rebels boosted by Hamas operatives.
In June 2013, the two organizations tried to patch things up at a high-level meeting in Beirut. They reportedly agreed to disagree about the Syrian crisis and not allow political differences to affect their bilateral ties. But relations are almost certain to remain strained as long as they are both on the ground in Syria.
For the wider Middle East, the Hamas-Hezbollah split is a dangerous microcosm of a growing trend. The Sunni-Shiite rivalry is now the main fault line on the ground and in politics, and it may impact the Syrian crisis most of all.

How has their relationship changed? What role has Iran played?

Iran has always been the element that tied (Sunni) Hamas and (Shiite) Hezbollah together. The Islamic Republic’s priority was to foster organizations that would be part of “resistance” against Israel and the West. Tehran’s elite Revolutionary Guards basically created Hezbollah soon after Israel’s 1982 invasion of Lebanon. Iran has reportedly provided the organization with millions of dollars in funding and advanced weapons as a frontline resistance in Lebanon against Israel.
Tehran was not involved in the creation of Hamas, which grew out Muslim Brotherhood remnants in the Gaza Stip. Hamas formally announced its formation when the first Palestinian uprising, or Intifada, erupted against Israeli occupation in 1987. Tehran reportedly started providing Hamas financial aid and military training in the early 1990s. Thousands of Hamas militants have reportedly trained at Revolutionary Guard bases in Iran and Lebanon, while Hamas opened an office in Tehran.
Iran continued support for Hamas during the Second Intifada from 2000 to 2005. It increased aid to Hamas after Yasser Arafat’s death in 2004 and Israel’s 2005 withdrawal from Gaza. It also helped bail out Hamas after it took control of Gaza in 2007. Tehran also allegedly provided Hamas military equipment used in the 2008 and 2012 conflicts with Israel.
Hezbollah developed close ties to Hamas as a result of Tehran’s sponsorship. In Lebanon, Hezbollah hosted Hamas leaders for years. But in mid-2013, Hezbollah reportedly asked Hamas leaders to leave Dahiyeh, the southern suburbs of Beirut.
Tehran reportedly reduced its funding for Hamas over its involvement in Syria. “For supporting the Syrian revolution, we lost very much,” Ghazi Hamad, Hamas’ deputy foreign minister, said in May 2013.
But Hamas may be reconsidering its strained relationship with Hezbollah and Tehran. Hamas may feel its position has weakened since the July 3, 2013 toppling of Egyptian President Mohamed Morsi, a former Muslim Brotherhood leader. A few weeks later, Hamas official Ahmad Youssef told the press that the movement had met with Iranian and Hezbollah representatives in Beirut. “Both sides stressed that their common enemy is Israel, with the understanding that each side understands the other’s position regarding areas of difference,” Youssef said, “particularly when it comes to the situation in Syria.”

What are the similarities and differences in their agendas? How have their goals and strategies changed since the 1980s?

Hezbollah have Hamas have both undergone profound transformations since they were founded. In their early years, both were considered underground movements associated with violence and suicide bombings. But they later gained reputations for delivering social services. Hamas and Hezbollah built bases of support that allowed them to establish influential political parties.
Since its inception, Hezbollah has been committed to resisting Israel. The Party of God has also been loyal to Iranian Supreme Leader Ayatollah Ali Khamenei. Its agenda has almost always aligned with Tehran’s interests. But it has accepted that Lebanon’s diverse population may necessitate a multi-sectarian state rather than an Islamic government.
Hamas has had parallel goals to Hezbollah. It has been committed to the destruction of Israel and creating an Islamic state in Palestine, although some leaders have indicated in recent years that they might accept a Palestinian state based on the 1967 borders—next to a Jewish state. But the organization has retained its right to resist Israel with violence.
Hamas and Hezbollah had similar goals and objectives as long as they considered Israel the main enemy. But the Syrian uprising changed everything. Hezbollah shifted its primary focus to defending the Assad regime rather than confronting Israel.

What countries influence, army and train Hamas and Hezbollah funds?

Qatar stepped in to provide Hamas with money and arms once Iran reduced for support for Hamas. Qatar’s influence over Hamas also increased after Khaled Mashaal moved to Doha in 2012. He reportedly had a close relationship with the former emir, Sheikh Hamad bin Khalifa al Thani. In October 2012, Sheikh Hamad became the first head of state to visit Gaza since Hamas took control in 2007. He pledged $400 million to build homes and rehabilitate roads. But Qatar’s relationship with Hamas has been merely political, not military.
Hezbollah’s main benefactor is still Iran. But their relationship runs much deeper than any relationship Hamas has ever had with a sponsor. Hezbollah is significantly dependent on Iranian support, particularly the Revolutionary Guards.
Hezbollah initially resisted getting involved in Syria because of the potential costs. But Iran’s needs have trumped Hezbollah’s interests. Secretary General Hassan Nasrallah has visited Iran twice since the Syrian uprising began. Hezbollah eventually entered Syria on the side of Assad, almost certainly under Iranian pressure.

What have Hamas and Hezbollah achieved politically?

Hezbollah entered electoral politics in 1992, winning eight parliamentary seats. It gradually gained more influence as a member of coalition governments but did not play a major role until Syria’s 2005 withdrawal from Lebanon. Hezbollah effectively inherited the Syrian role, including influence over state institutions. By 2010, it was powerful enough to force the resignation of Prime Minister Saad Hariri by pulling out of the coalition government, although the move cost it some support.
Hezbollah is now entrenched in the Lebanese state. It has sufficient clout to prevent the creation of any government that would try to exclude it. Its hold extends into some branches of the Lebanese Army and intelligence services.
Hamas entered politics much later than Hezbollah. In 2006, it won a stunning victory against the long-dominant Fatah Party of Yasser Arafat in parliamentary elections--and quickly had to learn how to govern. In 2007, clashes between Hamas and Fatah left Hamas in uncontested control of Gaza, which it still held six years later.
The electoral victories of Islamist parties in Egypt, Tunisia and Morocco boosted Hamas’ status after the 2011 uprisings. Two years later, however, its popular support may be ebbing. Ironically, Hamas now faces challenges from other Islamists, notably ultraconservative Salafis and jihadi groups in Gaza.

For more information on Hezbollah's interests in Syria, watch Ghaddar's July 25 presentation at the Wilson Center.

Hanin Ghaddar is the managing editor of NOW Lebanon and was a public policy scholar at the Woodrow Wilson Center for International Scholars Middle East Program in 2012.