What are its origins?

The Nusra Front, which emerged in 2012, is a Sunni extremist movement based in Syria. It is the third iteration of al Qaeda’s branch in the Levant. Its ideology is rooted in the same doctrine; it has pledged allegiance to Ayman Zawahiri, the successor to Osama bin Laden. It descended from al Qaeda of Iraq, which was later renamed the Islamic State of Iraq. In mid-2011, ISI dispatched nine fighters to Syria to provide logistical support for jihadists moving from Syria to Iraq. By January 2012, they had gained sufficient support in Syria to declare formation of the Nusra Front. Its leader is Abu Mohammad al Julani.

Nusra formally split from ISI in April 2013 over strategy. Julani reportedly refused to carry out orders from Abu Bakr al Baghdadi, the ISI leader. Baghdadi countered by trying to merge the two groups, rebranded as the Islamic State of Iraq and Syria (ISIS).

Julani opted to break away, a move that reflected the growing rivalries among jihadists. Nusra instead reaffirmed allegiance to al Qaeda. Nusra and ISIS now compete militarily for the same turf in northern Syria.

The Nusra Front now has between 5,000 and 10,000 fighters, many of whom traveled to Syria from Russia, Europe, and elsewhere in the Middle East. It attracts more foreign fighters – accounting for around 30 percent of its ranks – than any Syrian rebel group except ISIS.

What is its reach? 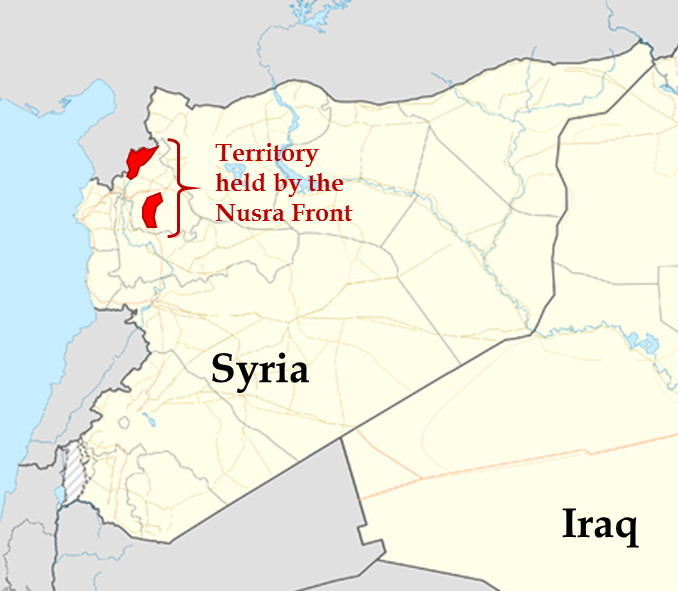 The Nusra Front has consistently been one of the most active rebel groups in Syria. By the end of 2013, the group was operating in 11 of Syria’s 14 provinces. It continued making territorial gains in November 2014, seizing key suburbs of Idlib from Western-backed rebel groups, including the Syrian Revolutionary Front and Harakat Hazm. By 2016, Nusra was firmly rooted in its strongholds in the Idlib province and parts of the Aleppo province, while also operating in the Latakia and Quneitra provinces.

The group reportedly ramped up recruitment following the U.N.-backed ceasefire in February 2016, recruiting around 3,000 new fighters between March and May. Since the Nusra Front was excluded from the ceasefire, it attracted recruits by presenting itself as one of the only groups still actively fighting Assad.

Who is its leader?

Abu Muhammad al Julani has led the Nusra Front since its creation in 2012. Little is known about his background. He uses a pseudonym; his real name is unknown. But his alias – also transcribed as Golani – indicates he was born in the Israel-occupied Golan Heights.

He reportedly traveled to Iraq and joined AQI after the U.S. invasion of Iraq in 2003. He was later arrested by the U.S. military and held in Camp Bucca until around 2008. After his release, Julani re-joined AQI and led its operations in Mosul before returning to Syria in 2011.

What are its ideology and goals?

It has at times downplayed its extremist worldview to form alliances with other Syrian rebel groups dedicated to overthrowing Assad. Unlike ISIS, the group generally avoids sectarian rhetoric and attacks on fellow Sunni Muslims to avoid alienating potential allies.

The Nusra Front has argued that an Islamic state in Syria should only be established with the consensus of other Islamist groups. In May 2016, however, its leaders were reportedly preparing to declare an Islamic emirate in Syria. The emirate, intended to rival ISIS’s so-called caliphate, would likely be concentrated in Idlib.

How does it govern?

The Nusra Front governs the territories it holds, having established a Shura council, a military command, and Islamic courts. The military command provides guidance to provincial-level fighters who operate relatively autonomously.

The group has also provided basic services in the areas it controls. In 2014, it took steps to portray itself as a protector of the Syrian people, supplying food and other goods to people in its territories. It also reportedly provides water, electricity, and medical care.

Although these tactics garnered some support for the group, residents living under its control have protested Nusra’s strict Islamic governance and suppression of dissent. It has reportedly detained dozens of civil activists in its territories, and regularly cracks down on civil society organizations focused on democracy and human rights.

A group Syrians has been exposing violations and other activities by Jabhat #alnusra in #Syria@TheSyriaPulsehttps://t.co/sMPybZr6yK

What is its relationship with al Qaeda?

The Nusra Front maintains strong ideological and operational ties to al Qaeda, acting as its Syrian affiliate. Al Qaeda dispatched leaders to Nusra-held territories in Syria as early as 2013.

In 2015, the group reportedly considered distancing itself from al Qaeda to advance its cause in Syria and obtain financial support from the Gulf. But in 2016, its ties to al Qaeda appeared to be as strong as ever. Zawahiri released an audio recording in May 2016 reiterating al Qaeda’s support for the Nusra Front. “We are proud of our ties with [the Nusra Front] and we pray that God give them strength and success,” Zawahiri said.

If the Nusra Front were to establish a more permanent presence in Syria, al Qaeda could reap benefits. A Nusra-run Islamic state could provide an alternative operating base for al Qaeda’s senior leaders – currently in the tribal areas of Pakistan and Afghanistan – as well as provide closer access to targets in Europe and recruitment opportunities in Iraq, Turkey, Jordan, and Lebanon.

What is its relationship with ISIS?

The Nusra Front and ISIS are rivals, despite propagating a similar ideology. The tension stems from ISIS’s break with al Qaeda in February 2014. Zawahiri officially severed ties with ISIS after its leaders repeatedly ignored commands from al Qaeda’s core leadership. “ISIS isn’t a branch of al Qaeda and we have no organizational relationship with it,” Zawahiri said. “Nor is al Qaeda responsible for its actions and behavior.” The groups have frequently clashed. By March 2014, more than 3,000 fighters had been killed in battles between ISIS and the Nusra Front.

The Nusra Front shares ISIS’s goal of establishing an Islamic caliphate. But its strategy to achieve that objective is different. In line with al Qaeda, the Nusra Front believes that a global caliphate should be achieved gradually, beginning with attempts to win over Muslim populations. ISIS, however, declared its caliphate unilaterally in 2014. It attacks anyone who does not share its worldview – including other jihadists and Sunni Muslims.

Although the two groups reportedly considered joining forces in late 2014, Julani emphasized in 2015 that the groups remained at odds with no immediate plans to reconcile. In a recording released in September 2015, Zawahiri reiterated that he considered the ISIS caliphate illegitimate. But he also called for cooperation between al Qaeda and ISIS “to push back the attack of the enemies of Islam.”

Who are its allies and enemies within Syria?

Unlike ISIS, the Nusra Front has cultivated allies among other rebels trying to overthrow Assad, even among groups that do not share its hardline ideology. But its ties with other rebel groups are tenuous. By pushing to establish an Islamic emirate, the Nusra Front has risked alienating its allies who do not necessarily want a government based on an extreme interpretation of Islam.

In the past, the Nusra Front has collaborated with Ahrar al Sham, a hardline Islamist militia. In 2014, the two militias joined forces to attack Syrian government troops in Idlib. But Ahrar al Sham reportedly rejected a formal merger with Nusra because of the Front’s ties to al Qaeda.

The Nusra Front has a more complicated relationship with the Free Syrian Army (FSA), a loose coalition of opposition militias, a few of which are backed by the United States. Some FSA brigades have cooperated with Nusra to fight Assad’s forces. But the Front also regularly attacks the FSA brigades with Western ties, including Harakat Hazm.

The Front engages in fewer sectarian attacks than ISIS, but Nusra has targeted Shiite allies of President Assad, particularly Hezbollah, an Iran-backed Lebanese Shiite militia. Julani released an audio message in October 2015 encouraging attacks on Alawities – a minority Shiite sect to which Assad belongs – in revenge for Russia’s military intervention to support the president.

Who supports the Nusra Front in the international community?

The Nusra Front has few allies in the international community. The United States designated the Nusra Front as a terrorist organization in December 2012. The U.S.-led coalition, which has been bombing Syria since 2014, has primarily targeted ISIS, but it has also dropped bombs on the Khorasan group. Khorasan is a network of seasoned al Qaeda fighters based in Nusra-held territory. In April 2016, a U.S. airstrike reportedly killed one of the Nusra Front’s founding members, Abu Firas al Suri.

The Nusra Front and ISIS were both excluded from the U.N.-backed ceasefire brokered by the United States and Russia in February 2016. But the Front’s ties with other rebel groups has complicated the situation. In May, the Nusra Front launched attacks on Assad’s forces in Aleppo, hindering international efforts to reach a truce in Syria’s largest city.

However, the Nusra Front does have benefactors in the Gulf. It is reportedly funded by private donors in Saudi Arabia, Qatar, and Kuwait, in addition to money from oil sales and ransom payments. The Nusra Front also allegedly has ties to Qatar, leading to speculation in 2015 that the group was distancing itself from al Qaeda to get more support from the Gulf state. The Qatari foreign ministry, however, has denied the connection.

Audio
Terrorism
AfPak File: How Serious Is The Islamic State Threat In Afghanistan?