The Russian-Turkish Fling: Off Again on Again

One should not forget that it was Turkey that sought accession to NATO when the Soviet Union was seeking to encroach on its eastern provinces. The United States may not be a perfect ally, but one of its advantages for Ankara is that it is far away.

Turkish newspapers were ecstatic following the meeting between Presidents Recep Tayyip Erdogan of Turkey and his Russian counterpart Vladimir Putin. This was the beginning of not just a new relationship between these two countries but the dawn of a new geostrategic alignment. Some commentaries in the West and elsewhere interpreted this move as the beginning of Turkey’s slow detachment from the West and the United States in particular, to be replaced by a Eurasian bloc which would include these two as well as China, Iran and other Central Asian states. In fact, most of what was agreed to had to do with improved economic relations and the restarting of projects that had been frozen. The only notable exception was the creation of bilateral working group on Syria composed of representatives from the respective foreign and defense ministries and intelligence services.

Even in the U.S. and elsewhere analysts spilled a great deal of ink over the long-term consequences of this visit. The context for Erdogan’s trip to St. Petersburg was set by two developments: first, is the July 15 failed coup attempt, which shocked the Turkish public and provided a much-needed boost to the Turkish government, as citizens for the first time came to the defense of the constitutional order. To Erdogan’s great displeasure, it took President Barack Obama some two hours on the night of the coup to denounce it. To make matters worse, Washington has refused to immediately extradite Fethullah Gülen, the Pennsylvania-based cleric and former Erdogan ally whom the President accuses of fomenting the coup. Since July 15, Erdogan’s government has purged some 82,000 people from government positions and detained 26,000 people he accuses of being Gulenists.

Second, Russian-Turkish relations had been in the doldrums since November 24, 2015, when the Turks shot down a Russian bomber that briefly violated Turkish airspace. Turkish leaders such as then-Prime Minister Ahmet Davutoğlu, euphorically declared the next day that he had ordered the shoot down personally and, according to Erdogan, would do so again without hesitation in order to defend the country’s borders and make Russia respect the rules of engagement. In a swift rebuke, Putin banned all tourism to Turkey at a time when the country was already suffering a severe decline in tourist arrivals due to a spate of bombings, including one at Istanbul’s main airport. He also banned Turkish agricultural imports. The combined economic damage, along with a sense of deep isolation in its region, forced Erdogan to apologize to Putin on June 26 of this year. But the Erdogan government went further. In the midst of the reconciliation and in the coup’s aftermath, Turkey blamed its pilots for acting on Gülen’s orders, and promptly had them arrested—a gesture that betrayed weakness. Turkish leaders would have been better off admitting they had erred.

Russia, however, is not an alternative to Turkey’s Western connections and NATO alliance. The current animosity against America aside, the two countries have been working closely together for decades.

It is very unlikely that Putin believes this new narrative. He is no doubt savoring the Turks’ tortured explanations and is willing to play along. For him this is an opportunity to needle the United States and demonstrate that he still commands clout internationally—not to mention a chance to enjoy watching Erdogan bend to his will. Similarly, for Erdogan and his government, reconnecting with the Russian leader and demonstrating to the West that he has alternatives at a time of major domestic convulsion, residual fear, and uncertainty provides him with some psychological gratification.

Russia, however, is not an alternative to Turkey’s Western connections and NATO alliance. The current animosity against America aside, the two countries have been working closely together for decades. It is not just their militaries that are well integrated; Turkish and American officials also interact everyday on a variety of global issues—the environment, terrorism, and economic governance to name a few. American and Turkish NGOs, companies, academics, and other mutual exchanges eclipse anything the Russians have and can offer.

A quick look at recent export statistics for Turkey shows Turkey’s dependence on Western markets. In 2015, its primary market was Germany, with 9.3 percent, followed by the UK, Iraq, Italy, Spain and the United States. Russia, with 2.5 percent, is a distant ninth. Foreign investment flows would demonstrate an even greater linkage to the advanced economies. European and American companies dot the manufacturing landscape, from automotive to electronic to chemical industries. Turks seek employment and education in the West. How many Turks have sought Russian or Chinese citizenship and residency? Even the most anti-American Turk, including members of the pro-Erdogan elite, would rather live and interact with the United States than with Russia. Russia has an economy that survives on hydrocarbon exports and cannot compete internationally. When was the last time a Turk bought a Russian car (remember the Lada?) or a Russian airliner?

So let’s not kid ourselves. Distancing itself from the West would impoverish Turkey and would not make it any safer. One should not forget that it was Turkey that sought accession to NATO when the Soviet Union was seeking to encroach on its eastern provinces. The United States may not be a perfect ally, but one of its advantages for Ankara is that it is far away.

Turkey has been an important, though always prickly, ally for the United States. Washington and Ankara have had their share of disagreements over the years. Most recently, the U.S. decided to back the Syrian Kurds as the most effective anti-Islamic State (IS) force in Syria, to the dismay of Turkey, for whom the Syrian Kurds are just an extension of their own Kurds. Currently, the United States makes use of the mammoth Incirlik Air Base in Turkey’s south to conduct operations against IS in Syria and Iraq. Can Ankara deny the use of the base? Were it to do so, it would risk jeopardizing its relations with Washington and especially Congress and an incoming new administration. More importantly, IS is as much a threat to Syria and Iraq as it is to Turkey.

So let’s not kid ourselves. Distancing itself from the West would impoverish Turkey and would not make it any safer.

The challenge for Erdogan and his colleagues is to chart a course through the emotions engendered by the brutal coup attempt. The sycophantic choir around him is attempting to undermine relations with the United States with fantastic conspiracy theories. Erdogan has fueled these by suggesting that the U.S. may have supported the coup; in effect this is all the Turkish public needs. Just about everyone today believes in U.S. complicity. Herein lies the danger for the relationship. Were he to succumb to these voices, Turkish-American relations would undergo a rough patch from which it might—and I stress might—be impossible to recover. The U.S. policy of hunkering down and trying to quietly manage the relationship in the hope that Turkey will return to its “factory settings” is folly. The July 15 coup has opened a Pandora’s Box; the relationship has been transformed and the old rules no longer apply.

This article was originally published in the American Interest. 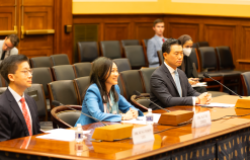