Chris Wilson, Associate at the Mexico Institute at the Woodrow Wilson Center, and Erik Lee write about the U.S.-Mexico trade partnership for Site Selection Magazine. The two are coauthors of the trade and competitiveness chapter in the forthcoming "State of the Border Report," from which this article was adapted.

Commerce between the United States and Mexico is one of the great — yet underappreciated — success stories of the global economy. In 2011 U.S.-Mexico goods and services trade reached the major milestone of one-half trillion dollars with virtually no recognition. The United States is Mexico's top trading partner, and Mexico — which has gained macroeconomic stability and expanded its middle class over the last two decades — is the United States' second largest export market and third largest trading partner.

Seventy percent of bilateral commerce crosses the border via trucks, meaning the border region is literally where "the rubber hits the road" for bilateral relations. This also means that not only California and Baja California, but also Michigan and Michoacán, all have a major stake in efficient and secure border management. 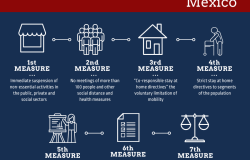