The event also celebrated the 10th anniversary of the Kissinger Institute on China and the United States.

Dr. Kissinger, who served as the 56th Secretary of State, was presented with the inaugural Spirit of Wilson Award, created to honor a person who embodies President Wilson’s belief that “there are many voices of counsel, but few voices of vision.”

“Henry Kissinger is the only person whose advice is sought by every U.S. president, every Chinese president, and leaders throughout the world,” said Wilson Center Director, President, and CEO Jane Harman. “The Wilson Center is so fortunate to house a program reflecting his name and his wisdom.”

Senator Blunt and Congressman Hoyer were honored with the Woodrow Wilson Award for Public Service, given to individuals who have “served with distinction in public life and have shown a special commitment to seeking out informed opinions and thoughtful views.”

“I want to thank the Wilson Center for the work that it’s doing. We have a great deal of respect and affection for you, and the country is benefitted by your service.”-----Congressman Steny Hoyer (D-MD) 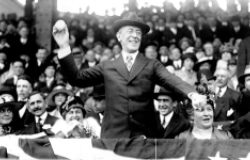