WASHINGTON:  The Wilson Center today released a major new report on the controversial U.S. civilian assistance program to Pakistan, known as Kerry-Lugar-Berman (KLB). The report warns that substantial mid-course changes are necessary if KLB is to fulfill its goals for both the United States and Pakistan, and provides nearly 30 recommendations for guiding KLB forward.

“We have to get Pakistan right,” said Jane Harman, president and CEO of the Wilson Center.  “This report represents an important step in that direction.”

Aiding Without Abetting: Making U.S. Civilian Assistance to Pakistan Work for Both Sides concludes that a robust program of U.S. civilian assistance to Pakistan serves important American interests. It urges Congress not to confuse security aid to the Pakistani military with economic assistance designed to shore up civilian government, address food, health, and energy shortfalls in Pakistan, and lay the groundwork for a successful Pakistan and a long-term U.S.-Pakistani partnership.

“Writing Pakistan out of the American foreign policy script is simply not an option,” President Harman said.  “We should not penalize Pakistan’s civilian sector because of our serious differences with its military and should live up to our pledge to provide Pakistan with economic assistance through 2014.  ”

“U.S. assistance is not a Pakistani entitlement, however. American aid should augment, not replace, Pakistani funding.  We must reenergize and reform the manner in which we deliver civilian aid to Pakistan, with each U.S. aid project including a roadmap and timetable for becoming self-sustaining.”

For more information or for copies of this report, call (202) 691-4020, or email asia@wilsoncenter.org. Click here to read the full report online, in pdf format. 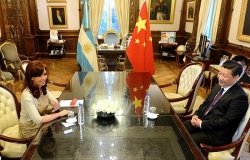