Alison Brysk provides response and analysis to the shooting in Santa Barbara and the #YesAllWomen phenomenon.

After a year of studying violence against women worldwide, I awoke to a misogynist massacre in my hometown.  I've been writing about rape culture as a form of terror that undermines women's leadership, economic participation, and education in places like Pakistan.  But when I joined the #YesAllWomen response to the Santa Barbara killings, I was reminded of the terror closer to home. I experienced sexual harassment during my research in India and South Africa—and my college-age daughter did not feel safe in the streets of Santa Barbara's free-for-all student zone.

The World Health Organization estimates that one out of three women experiences violence, and gender-based violence occurs across all cultures--but it is more frequent and severe in some societies.  My own statistical research shows that the variation in levels of violence is not linked to regional culture or religion, and we can explain about half of the level of violence by sociological factors like poverty and urban crowding.  The violence in Santa Barbara clearly does not reflect these kinds of factors, but it does follow global crime patterns that include rising social inequality and access to weapons.

But the Santa Barbara massacre reminds us of the other half of the drivers of violence: the worldwide variants of rape culture, which dominate the case study side of my research.  Elliot Rodger's homicidal rage reflects the same elements of sexual entitlement, objectification of women, masculinity defined through violence and control of women's bodies, and gendered projection of social competition that drive gang rapes in South Africa or femicide in Mexico.  And just like those places, it plants fear to undermine women's growing equity.

The good news is that even in the worst places, the vast majority of men are not rapists, that rape cultures are being challenged worldwide, and that many men are standing beside their sisters, daughters, and friends to change a way of life that damages us all.  What Santa Barbara reminds us is that 21st century American rape culture masquerades as a cool consumerist pop culture party that manipulates and weaponizes male insecurities. It is a wake-up call for the silent majority of smart, sane, and loving men to move from being bystanders to heroes.

Former Fellow;
Author, The Struggle for Freedom from Fear: Contesting Violence against Women at the Frontiers of Globalization
Read More 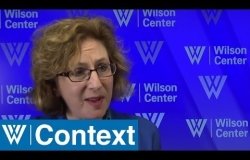 Video
Gender
Global Violence Against Women: Can it be Stopped?