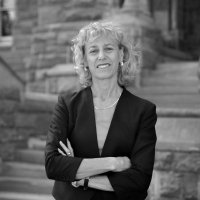 By Nancy Sherman on June 30, 2021
Society and CultureArts and LiteratureReligion

Nancy Sherman was a Wilson Center Fellow in 2006-2007 during which time she worked on a book about the moral and emotional transition from civilian to soldier and back to civilian again (Untold War: Inside the Hearts, Minds, and Souls of our Soldiers.) She later returned to the Center as a Public Policy Scholar in 2011 and worked on a book Afterwar: Healing the Moral Wounds of our Soldiers where she studied the psychological impact of war on soldiers and how they utilize resilience during hardship. She is a professor of philosophy at Georgetown University, as well as an expert in ethics, the history of moral philosophy, moral psychology, military ethics, and the emotions. She recently published a book titled Stoic Wisdom: Ancient Lessons for Modern Resilience , where she explores Stoic philosophy and applies its teachings to life's biggest and smallest challenges.

Q: In your opinion, who would benefit most from Stoic philosophy?

A:  Stoic philosophy is a philosophy for all, really.  I wrote STOIC WISDOM in the depths of the pandemic.  I had in mind the stressors we were all facing—loneliness, fear, anxiety, a sense of a very uncertain future.  But I also had in mind throughout this hard year of loss the sense of global connectedness that is a central tenet in ancient Stoicism s.  The Stoics were the first really to develop the idea that we are global citizens—"cosmopolitans, as they say—meaning, literally, “citizens of the world.”  The pandemic made clear that we are all in this together, and that solutions depend upon global mutual aid and cooperation.

Stoic techniques to allay fear are helpful all-purpose life hacks—for example, trying to anticipate hardship so we are fully not blind sighted if and when bad things happen.  Or psychological techniques, like trying to press a pause button on impulsive feelings and thoughts that, as the Stoics say, “outleap reason.”  Here, think of the unconscious preconceptions and bias that can get in the way of more rational responses, whether to do with police brutality or just our everyday dealing with folks who are different from ourselves.

Q: What is the biggest mistake that people tend to make when trying to deal with difficult stressors?

A: The Stoics would say what often gets us into trouble is vengeful anger, a sense that we need to strike back if we feel offended, or have the last word in an argument, or assume our way is the only way. A sense of being unjustly attacked is a stressor, and biting back is not a great response! Try to find calm, the Stoics teach, meditate on what you can control, and what you can’t accept, try to change.

Q: Could you share any upcoming projects you’re working on?

A: After I finish a book, I thrash around for a while, hungering for a new project. At the moment, I’m thinking more about the virtues, what it means to be good and what the ancient Greeks, especially, Aristotle, tell us about being virtuous. It’s not a new subject for me, but more than ever, I feel we need to return to the idea of becoming good and teaching and modeling goodness.

Q: How has your time at the Wilson Center impacted your research and understanding of your field?

A: I definitely think my time at the Wilson Center helped me to see my work—whether with the military going to war and coming home or with ancient ethics—as having strong policy implications. Academics have an obvious place in the ivory tower and classroom. But they also have an important role to fill in the public arena through public facing research and work.  Writing and speaking in a way that connects with a broader audience is not a bad thing for academics to learn! I think the Wilson Center underscored that lesson for me.

A: I would say that finding a supportive institution and department with the best scholars who are also wonderful mentors is key. I owe much in my academic career to teachers who cared about my work and my career. And that was from undergraduate days through to graduate school and beyond.