As India faces an emerging cancer crisis, how do South Indian women conceptualize what causes reproductive cancers—and how to cure them? New qualitative research from Cecilia Van Hollen, a medical anthropologist and Wilson Center Public Policy Fellow, illuminates the complex perceptions and personal experiences of women in Tamil Nadu, the first state to integrate cancer screening into its primary health care system.

“One of the striking facts about cancer in India is that it is extremely stigmatized,” said Van Hollen at a discussion of her work at the Wilson Center. “It is taboo in many cases to even utter the word ‘cancer.’” She found that women not only feared death and contagion by cancer, but also feared that their reputation and that of their families would suffer if people knew of their cancer diagnosis. Shame has long-term consequences when it blocks women from seeking testing and care—and shame increases when cancer involves the reproductive system.

Van Hollen, who has been studying, researching, and writing about maternal and women’s health in India for more than 25 years, interviewed women about their experiences with cancer. One woman, who was recently diagnosed with breast cancer, believed that her positive life choices should have kept her healthy: “I was brought up to be a very good girl and a good housewife, taking care of the children and taking care of the family, and I breastfed my children for a long time. So I was questioning: why me?”

Governmental and non-governmental organizations in South India are working hard to overcome the stigma of cancer, but Van Hollen argues that more needs to be done to prevent widespread assumptions about the link between cancer and “bad” or “immoral” behavior.

Van Hollen’s research complements her other major publications, which include Birth in the Age of AIDS: Women, Reproduction, and HIV/AIDS in India, published in 2013; and Birth on the Threshold: Childbirth and Modernity in South India, published in 2003. She also published “Feminist Critical Medical Anthropology Methodologies: Implications for understanding gender and healthcare in India,” in a special 2016 issue of Economic and Political Weekly. 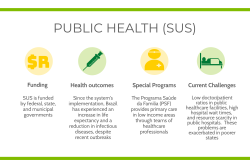 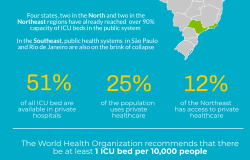 Article
Coronavirus
Healthcare Inequality and the COVID-19 Pandemic in Brazil
By Brazil Institute on June 4, 2020