Paying for pensions is vital to the quality of life for future retirees in Asia.  It's also an issue of great political and economic importance to current and future policy makers in the region.  They are currently wrestling with the dual problems of growing population in the poorest of countries while more developed Asia powers face the quickly approaching reality of rapid aging and declining population.

Is Asia as a region ready to confront these problems? What's more, does the political will exist to undertake the actions necessary to solve these problems? For example, some say pensions is the ticking fiscal time-bomb that will keep China from becoming fully developed before it turns grey. While in India, failure to develop institutional investors and long-term international investment could leave it short of the trillions of dollars it requires to develop the infrastructure necessary to truly reach its economic potential and remove hundreds of millions from crippling levels of poverty. Moreover, have Asian countries already squandered their demographic dividend through half-hearted efforts at reform and market access restrictions? Underlying all of these questions is a seismic transition occurring in many Asian countries. 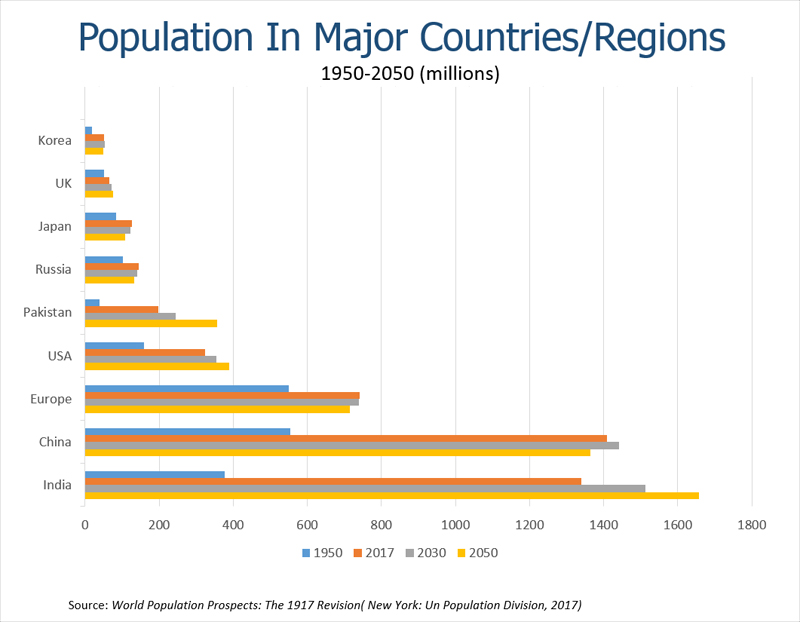 The first chart summarizes future population trends for select countries in Asia and around the world. It’s easy to see that developed Asian countries are faced with the reality of population decline, while poor countries, such as India and Pakistan, will continue to experience population growth.  During the period of 2017-2050, continued population growth in India and Pakistan will lead to India outpacing China by 2050 as the most populous and Pakistan becoming the sixth largest. In contrast, according to UN data, 51 countries will have lower populations in 2050 than in 2017. These include China, Japan, Korea, Russia and the EU.  Moreover, Brazil, Russia, Mexico and Japan will all be replaced in the list of the top ten most populous countries. In addition, fertility in all countries is now below the level required for the replacement of the population in the long run. 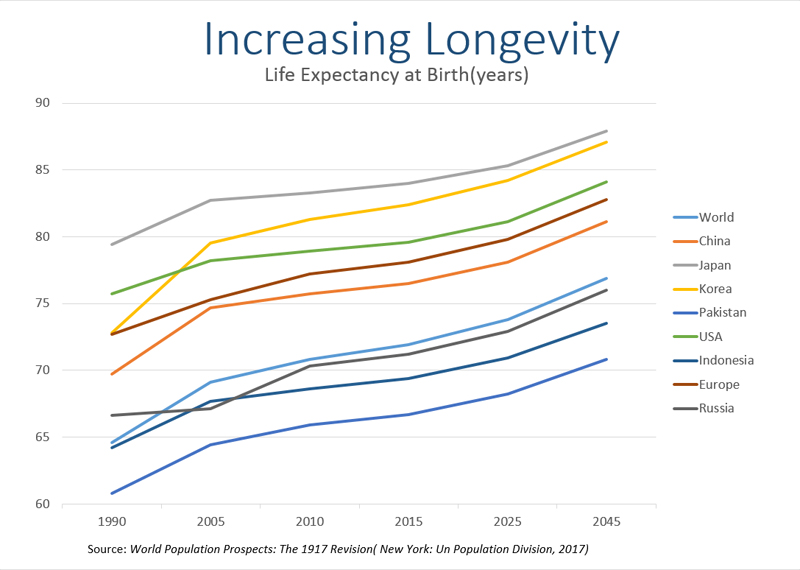 Chart 2 shows longevity across various countries. While the rates of growth are different the trend is similar–people are living longer–due to the increased accessibility and effectiveness of medical treatment. Globally, life expectancy at birth is projected to rise from 71 years in 2010-2015 to 77 years in 2045-2050.  Asia countries on average are expected to gain 6-7 years. It is striking to note that East Asia will be home to three of the countries with highest longevity: Japan, Korea and China. 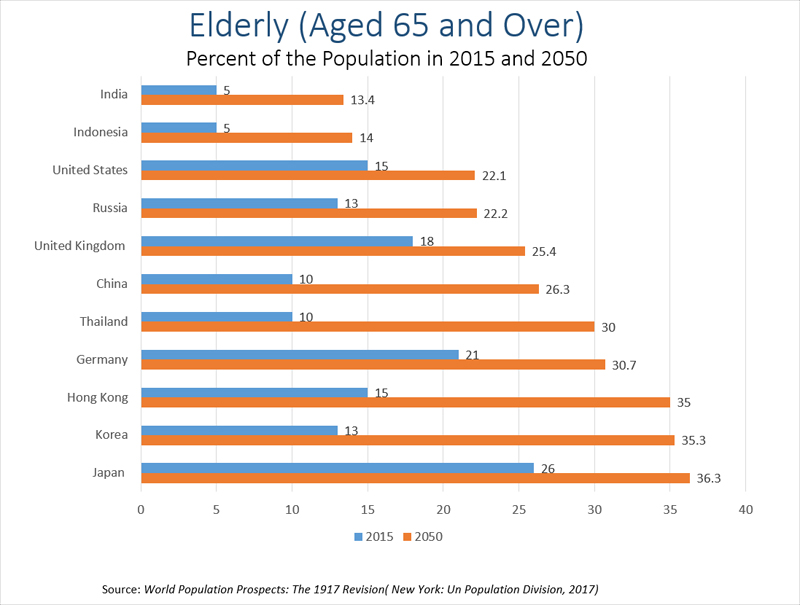 Chart 3 shows the rapid aging that is occurring in several Asian countries. As fertility declines and life expectancy rises, the proportion of the population above a certain age will rise as well. This phenomenon is known as population aging. Currently, Japan has the highest percentage of population over 65 years old at about 25 percent. By 2050, the population aging issue will spread to Korea and China. China will increase from 1 in 10 to 1 in 4 and Korea will go from 1 in 6 to 1 in 3.  In comparison, the United States will be less than 1 in 4 from 1 in 6. 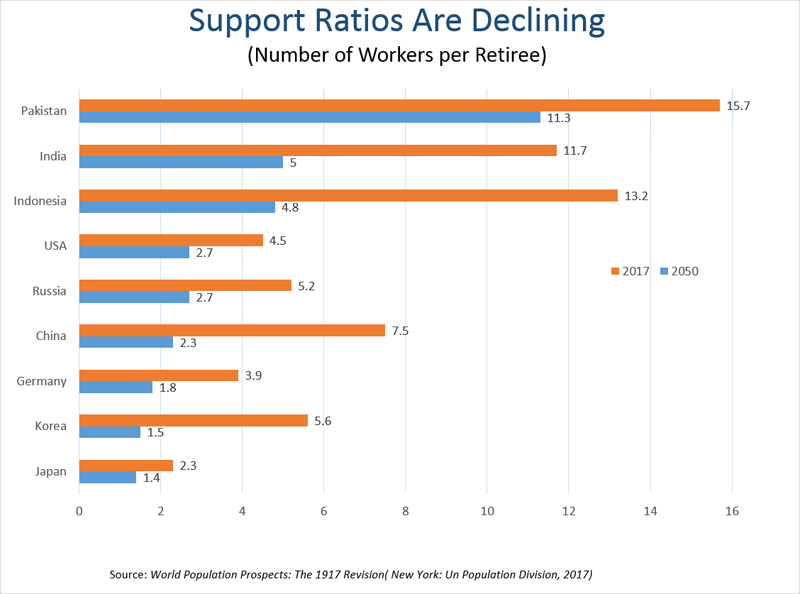 An example of how population aging is projected to have a profound impact on pensions is the support ratio, defined as the number of workers per retiree. Chart 4 demonstrates that the majority of East Asian countries will have support ratios at or below 2.0. The reduction of potential support ratio has important implications for social security schemes, particularly for pay-as-you-go (social security) pension systems under which taxes on current workers pay the pensions of retirees. Anything below 2.0 is seen as unstainable. Both Japan and Korea will dip below two workers per retiree and China is projected to undergo a precipitous slide from over seven workers to just above two workers per retiree.

These low values underscore the fiscal and political pressures that many countries are expected to confront in the coming decades in relation to public health care, pensions and social protections for a growing older population. This presents pressing pension concerns in many of the countries. How do they meet the needs of increasing numbers of retirees when PAYG pension plans are already experiencing severe pressures due to the demographic factors outlined previously–and many are already in deficit? For example, according to the latest data from China’s Ministry of Finance, pension expenses rose 11.6 percent to 2.58 billion yuan ($410 billion) in 2016. This leaves the government with a 429.1 billion yuan tab to cover the shortfall.[1]