Did the Soviet Union Deliberately Instigate the 1967 War in the Middle East? 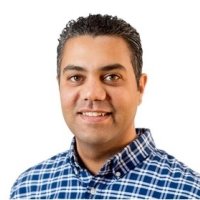 Hassan Elbahtimy uses new Egyptian sources to answer one of the great mysteries surrounding the 1967 Six-Day War: Did the USSR intentionally provoke Egypt to attack Israel?

The origins of the 1967 Six-Day War have long been a source of controversy among historians. Discerning the motives of regional and international actors through the thick fog of war and the preceding crisis is a challenging task.

Many historians see the war as part of a deliberate, premeditated plan by specific regional actors (either Israel, or Egypt and Syria). However, historians also emphasize the role of the United States and the Soviet Union in the war. Much has been written on the US providing an ‘amber light’ during the visit of Meir Amit (Chief of Mossad) to Washington, as well as of Soviet warnings to Egypt of an imminent Israeli attack on Syria. Whether through tacit or explicit encouragement, provision of arms or political backing, many argue that the superpowers were intertwined in the unfolding of war.

Egyptian records of contact between Cairo and the Soviet Union immediately preceding the war help to clarify a key question: whether Moscow pushed for an Arab-Israeli war during the crisis leading up to the 1967 War. These sources suggest that the Soviet Union, rather than fanning the flames of war, was a force for restraint and de-escalation in its contacts with Egyptian officials.

As the tensions in the Middle East escalated in the early months of 1967, it was natural for Egypt and the Soviet Union to be in close consultation. Since 1955, Egypt had relied on Soviet arms and training, and had incorporated many of its war doctrines. The Soviet Union also became Egypt’s willing partner in many industrialization projects. However, the relationship between Egypt and the Soviet Union was also mired in differences, particularly related to the spread of communism in Arab countries, most notably in Syria and Iraq.

It is widely acknowledged that the Soviet Union provided Cairo with warnings about Israeli intensions to invade Syria. On May 13, 1967, the Soviet Union provided information that Israel was amassing around 11 brigades to attack Syria through at least three channels. It was first communicated to Anwar Sadat, speaker of the Egyptian parliament, during his short stop in Moscow following an official visit to North Korea. It was directly communicated twice more in Cairo, through Egyptian intelligence and the Ministry of Foreign Affairs. As this information accumulated on Nasser’s desk, by May 13, Egypt was considering how it could come to Syria’s rescue.

At the time, Syrian-Israeli relations were particularly tense after a series of border skirmishes. Cairo watched anxiously as Israeli government and military officials made public threats to bring down the Syrian government in Damascus.

Egyptian-Soviet consultations during the height of the crisis illuminate how the Soviet Union approached the prospect of war in the Middle East. From May 25–28, 1967, a high-level Egyptian delegation visited Moscow to discuss the evolving crisis in the Middle East with the Soviet leadership. The Egyptian delegation was headed by Shams Badran (Minister of Defense) who was accompanied by Amin Howeidy (Minister for Cabinet Affairs), Ahmed Hassan Elfiki (Deputy Minister of Foreign Affairs), Salah Bassiouny (Diplomat) and several military officers. Nasser’s trusted Ambassador to Moscow, Mourad Ghaleb, accompanied the delegation to their meetings. Egyptian sources provide a corroborated and detailed picture of what went on during that visit.

My own interviews with Shams Badran, as well as detailed testimonies from Mourad Ghaleb, Salah Bassiouny, Mohamed Hassanein Heikal (who had a direct link to Nasser), and Egyptian minutes of the consultations paint a consistent picture of the messages the Soviet imparted to Egyptians, as well as their position on the escalation in the Middle East. In all these accounts, the Soviet Union comes across as a cautious and measured ally.

Shortly after announcing the closure of the Straits of Tiran to Israeli shipping, Nasser gave the Egyptian Minister of Defence instructions to fly to Moscow for consultations with Soviet officials. Nasser’s instructions to Badran emphasized that the primary aim of the consultations was to give the impression that Egypt had the backing of the Soviet Union. Additionally, the delegation took a list of needed armaments and military hardware to present to the Soviet Union.

The Soviets had arranged for the delegation to hold consultations with Marshal Andrei Grechko (Minister of Defense) and Andrei Gromyko (Minister of Foreign Affairs). However, as soon as the delegation landed in Moscow, Badran insisted on raising the profile of the consultations by meeting the Soviet Premier Alexei Kosygin. Ultimately Badran met with the Soviet Premier twice, in addition to meeting with Grechko and Gromyko.

On May 25, the Egyptian delegation was taken to a dinner, hosted by Marshal Grechko and attended by the high brass of the Soviet military. At that first encounter, the Egyptian delegation came face to face with how tense the Soviet military was at the prospect of a war in the Middle East. Through rounds of vodka, Soviet generals emphasized how it was not the right time for a military confrontation with the forces of capitalism and imperialism. When Deputy Minister Elfiki mentioned his son was serving in the army and was ready to offer his life to defend Egypt, the meeting became even tenser. The Egyptian delegation realized that, despite rhetorical support, the Soviet military wanted to avoid confrontation with the US. In response, Badran felt he needed to reassure them that Egypt had no plans to either stop or attack US vessels passing through the Straits of Tiran.

This same sentiment was repeated the following day, in meetings with Soviet Premier Kosygin. The Premier asked the Egyptian delegation many questions about the distribution of Egyptian troops, how close they were to Israeli positions, and Egypt’s long-term intentions for the Gulf of Aqaba. Kosygin toed a thin line. On one hand, he expressed support to Egypt and was sympathetic to Nasser’s position. On the other hand, he wanted Egypt to avoid any provocation or escalation. He told the Egyptian delegation “Politically, you prevailed. Militarily you prevailed. What do you want now? My view is that what you achieved is enough.”

My view is that what you achieved is enough. The Emergency Forces withdrew [: from Sinai]. You are in control of the Straits. Your troops are in Gaza? What more do you want?

“K [: Kosygin]: . . . I prefer discussions [: diplomacy] instead of military confrontation. This is not a suggestion but a continuation of our discussions because it might be the case that we don’t know all the different aspects of this issue. We think it important to take measures that give the enemy an image of your strength and not your weakness. From this position of strength, you will consolidate the success you achieved without the need to go into war. If you accepted this, then we are thinking along the same lines but if you have another point view please tell us”

In response to Egyptian arms requests, the Soviets were very cautious and less than forthcoming. The Egyptian military wanted new and advanced anti-aircraft missiles, but these requests were met with Soviet reluctance. Grechko emphasized that the arms Egypt already had seemed to be working well in Vietnam, but this argument infuriated the Egyptians. The Egyptian delegation was so disappointed by the Soviet response that Badran sent a message to Cairo from Moscow urging Nasser and Amer to meet with the Soviet Ambassador in order to apply pressure on Soviet leadership to response to their request.

In the second meeting with Kosygin, the Soviet position on providing arms became slightly more flexible. Although the Soviet Union provided favorable payment terms, many of the items that the Egyptian military needed, including some spare parts, remained out of bounds. The Soviet Union’s decision to accelerate the delivery of arms shipments to Egypt in July and August demonstrated how they treated the crisis with a lack of urgency. As the delegation was leaving Moscow, Grechko felt the disappointment in the Egyptian delegation. He bolstered Badran, telling him not to worry about the Americans, and reassuring him that the Soviets were not far away and could come to their aid.

According to a transcribed interview with Salah Bassiouny from 1997 in the Liddell Hart Centre for Military Archives (and corroborated by Badran and Ghaleb), Semyonov, valued in Egypt as a friendly voice in the Soviet Ministry of Foreign Affairs, asked to meet Elfiki for a private discussion. Semyonov pleaded that Egypt not start a war. He said the Soviet Union was not ready for war and, to the astonishment of his Egyptian interlocutor, said it was no match to the United States. Semyonov even provided painfully candid accounts of his own life in the Soviet Union to make his point. The two astonished Egyptian diplomats decided to report that discussion back to Cairo. 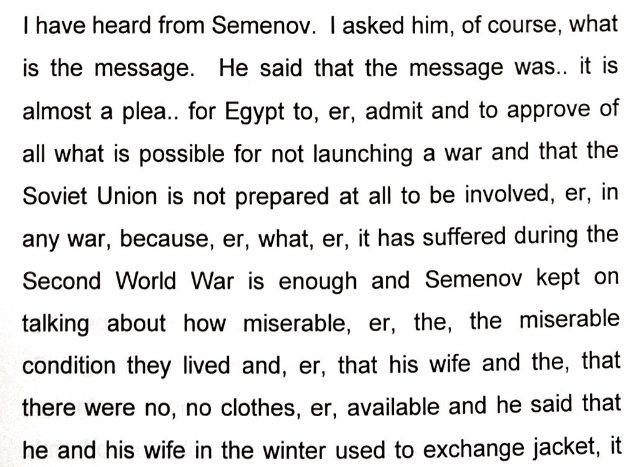 As far as external optics, Egyptians may have achieved what they wanted from their visit to Moscow: three days of high-level meetings in the public eye at the height of the crisis. However, their aims in terms of arms requests were not met, and the meetings emphasized the limitations of Soviet support.

These limitations, however, did not prevent Nasser from capitalizing on public Soviet support.  Rhetoric aside, the Soviet Union was both concerned and wary about any further escalation. This was communicated to Egypt in a clear and direct manner. The faulty intelligence provided by the Soviet Union early in the crisis may have played a key role in the chain of events that led to the Egyptian closure of the Tiran Straits. However, the Soviets became a force for restraint rather than confrontation as the full extent of the crisis took shape.

There is no space here for a lengthy engagement with the academic literature on the role of the Soviet Union or the many puzzles relating to the origins of the 1967 war. Examination of Egyptian sources offers crucial insights into some of these debates. My reading of the sources lead me to raise serious questions about Isabella Ginor and Gideon Remez’s argument (developed more succinctly in this essay) that portray the Soviet Union as a behind-the-scenes force manipulating events to precipitate a war in the Middle East. Michael Oren’s references to a split between Kosygin and the Soviet military over support to Egypt does not sit comfortably with Egyptian accounts that identified a consistently cautious attitude in Egypt’s meetings with Soviet politicians and military officials.

Questions about the full extent of the Soviet Union’s role remain, but Egyptian sources suggest that the Soviet Union, rather than being in the driver’s seat, was taken aback by the unfolding events in the summer of 1967.