Event Recap: On the Brink: Trump, Kim, and the Threat of Nuclear War

More than six decades have passed since the signing of the Korean War Armistice Agreement halted the bloodshed on the Korean Peninsula. Although war between the two Koreas was put on pause, the promise of peace remains elusive to this day. Painfully aware of its vulnerability to its southern neighbor and the U.S. forces stationed there, North Korea began its nuclear program in the 1950s. Despite years of nuclear negotiations between the United States, North Korea, and other concerned parties, North Korea has persisted in its quest to obtain a reliable nuclear deterrent.

After Kim Jong Un came to power in 2011, North Korea’s nuclear and ballistic missile testing accelerated at an alarming pace. In 2017 alone, the North launched 24 missiles and conducted its largest nuclear test to date. President Donald Trump responded aggressively, warning Kim that if he continued to threaten the United States, he would be met with “fire and fury like the world has never seen.” In his new book, “On the Brink: Trump, Kim, and the Threat of Nuclear War,” Dr. Van Jackson, a Wilson Center Global Fellow and former Pentagon insider, reveals just how close the world came to nuclear war in 2017 and provides suggestions for how to prevent such dangerous escalation in the future.

Ahead of the second Trump-Kim summit, the Asia Program and the Hyundai Motor-Korea Foundation Center for Korean History and Public Policy hosted Dr. Jackson for a discussion about the Trump administration’s response to the North Korean nuclear threat. He was joined by Asia Program director Abraham Denmark, Korea Center director Jean Lee, and Vox international security correspondent Alex Ward. 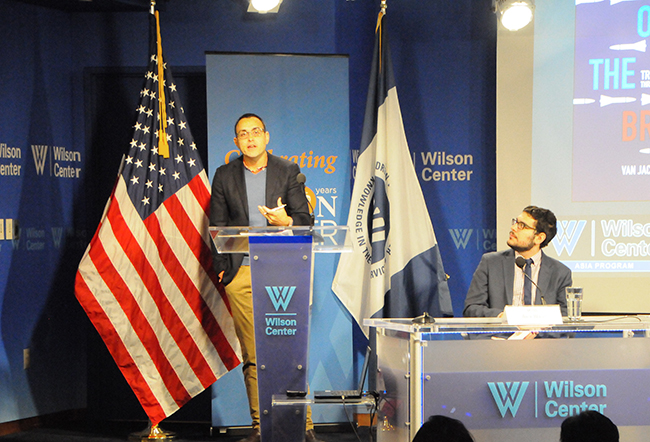 In his opening remarks, Dr. Jackson emphasized that the world came closer to nuclear war in 2017 than any time since the Cuban Missile Crisis. “I honestly didn’t know if I was writing the history of a nuclear Korean War or the history of a near miss,” he admitted. In his book, he explains that the Korean Peninsula was on not one, but three simultaneous paths to war: 1) war as a pathological choice, i.e. preventive war against a nuclear-armed adversary; 2) war through inadvertent escalation, i.e. an unanticipated result from some deliberate decision, such as a bloody nose strike on North Korea; 3) false positive war, i.e. war based on pure misperception.

In Dr. Jackson’s opinion, the third path seemed most likely to occur at the time. He argued that numerous false positive events could have incentivized one side to launch war on the other because they mistakenly believed that they were under imminent attack. For example, in October 2017, Defense One published a story that the United States was planning to station nuclear bombers in the Pacific on 24-hour alert for the first time since the Cold War. While the story turned out to be false, it took more than a day to retract, during which time, he explained, “We’re not controlling North Korean perceptions, we’re not controlling what version of the story they choose to believe, and strategically, rationally, they have the incentive to believe the scarier story.” Dr. Jackson described each false positive event as a round of Russian roulette. “You don’t control the perceptions of the other side. You don’t know how they’re going to react when you accidentally communicate an indicator of war… [W]e were lucky because if you play Russian roulette enough times, you are going to lose, and in this case, losing meant nuclear war.” 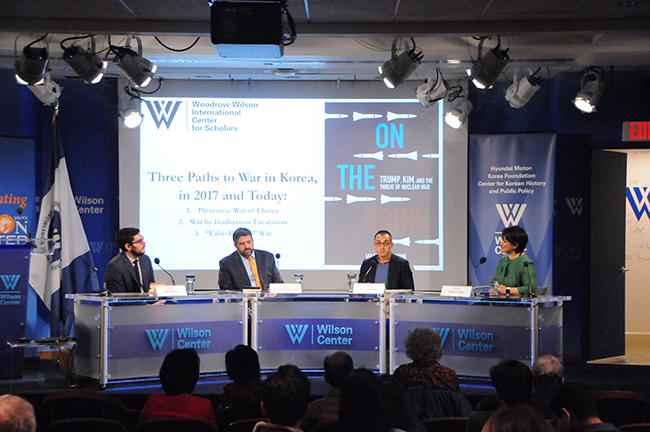 Although Dr. Jackson argued that diplomacy is worth a shot, he expressed concern about the lack of progress in ongoing negotiations. “I think so far, what I see... is that all of this activity being done in the name of diplomacy is failing, on the U.S. side at least, to address the underlying conditions that gave rise to the crisis of 2017… Kim Jong Un can credibly threaten the U.S. with nuclear attack to the same degree, with the same level of confidence, as he did on the date of his last intercontinental ballistic missile test on November 28, 2017.” He emphasized that the metric for success should not be how many times the two leaders shake hands, but rather the number of North Korean warheads, and their ability to put the United States at risk.

Lee argued that bringing the two nations to the brink of nuclear war was North Korea’s strategy all along, because raising the stakes that high would force the United States to the table. She also emphasized, however, that we should keep in mind that “at the end of the day, the United States has what [Kim Jong Un] needs and wants. That’s a lifting of sanctions, possibly a peace treaty, [and] economic help.”

Denmark, on the other hand, expressed his reservations about what concessions the president might be willing to offer. “One of the things that really struck me coming out of the Singapore Summit was President Trump really giving a lot... [G]iving up joint military exercises was, to me, a big deal for very little in return.” “So as we leap into the next summit,” he continued, “My concern is that the President is so focused on… this declaration of the end of war… [that] the United States may be looking to give up something that’s very important in exchange, again, for very little in return.”

Listen to the full event below, and you can read key quotes and see additional photos at the event website.

Sarah Heywood is an intern with the Korea Center and a master’s student at Johns Hopkins SAIS. You can follow her on Twitter at @kimsarah94.