China hasn’t taken U.S. criticism of its violations of human rights lightly. Rather, Washington’s attacks against Beijing at the Anchorage meeting in March between the U.S. delegation led by Secretary of State Anthony Blinken and National Security Advisor Jake Sullivan and Chinese Foreign Minister Wang Yi and State Councilor Yang Jiechi was marked by hostility on both sides. In fact, Blinken’s  criticism of China's clear abuse of human rights and oppressions of minorities from the Uighurs of Xinjiang to protesters in Hong Kong to persistent suppression of Tibetans have only fanned the flames of Beijing’s wrath. What’s more, China’s pushback against the United States, arguing that Washington can hardly champion equality given its own challenges in addressing racism, has resonated with many minorities — including Asian Americans — within the United States.

To be sure, the United States has struggled to get race relations right since its founding. The surge in violence against Asian Americans since the outbreak of the pandemic has made clear what Asian Americans and Pacific Islanders have known all along: that even when they are often noted as the so-called model minority of America, they continue to be discriminated against and face difficulties being seen as fully American, even when they are native-born. What’s more, there is wariness that the momentum for the #StopAsianHate movement will eventually subside, and there will be no lasting change to address the issues that Asian-Americans have confronted throughout their history in the United States.

But while the United States can hardly claim to have the answer in dealing with the complexity of race and identity politics, its ability to allow for frank discussions on policy missteps in race relations and encourage debate on what can be done to rectify the situation is undeniable. In fact, as the country celebrates Asian-American Pacific Islander heritage this month and showcases the array of cultural heritage as well as contributions made by the AAPI of the United States, it is the ability for the country to confront ugly truths that should be celebrated as well. Much attention has been paid this May on the backlash against AAPIs since the outbreak of COVID in March 2020, and the history of discrimination faced by the diverse community over the decades.

The ability for the United States to self-reflect and self-correct when it comes to dealing with racism can be a wake-up call for U.S. allies in Asia to do the same.

At the same time, the surge in violence and hatred towards Asian Americans should also be a wake-up call to Asians who are either temporarily or permanently in the United States and expect to be treated without discrimination whilst in the United States yet tolerate prejudice and racism back in their own country. Although racism and discriminiation in Japan and South Korea pale in comparison to the systemic repression of minorities in China, the uncomfortable truth remains that both Tokyo and Seoul, as well as much of the rest of Asia, also are not immune from supporting racism themselves. Yet at the same time, most Japanese and Koreans expect the United States to be true to its vision of openness, and be treated as equals themselves. The ability for the United States to self-reflect and self-correct when it comes to dealing with racism can be a wake-up call for U.S. allies in Asia to do the same.

The narrative of American exceptionalism is a compelling one and undoubtedly a vision that unites a vast and diverse country. But it is its ability to acknowledge wrongs and endeavor to self-correct which will ultimately make it stronger. At the same time, the U.S. ability to demonstrate to Asian nations that continue to discriminate and oppress minorities within their own borders that their people can actually succeed more in the United States will be the most effective way to promote U.S. values. 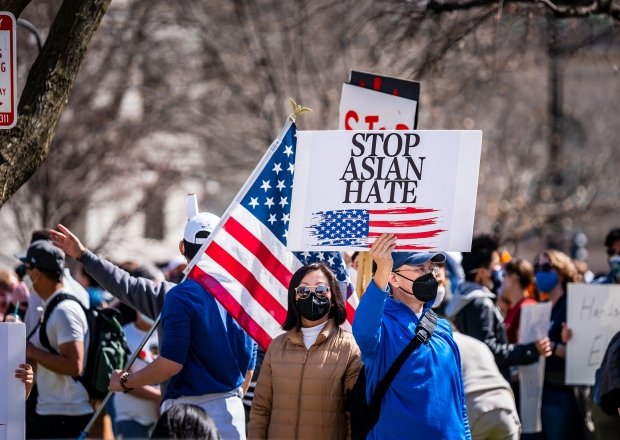 Beyond #StopAsianHate: The Way Forward for Asian Americans and Public Policy Prescriptions

Join us on May 25th for a discussion on how anti-Asian hate has united AAPIs across the United States, the challenges ahead for consensus and collective AAPI action, and prospects for moving forward with policies that will strengthen the voice of Asian Americans and Pacific Islanders in the country.