Not all debt is created equal, and that rule still stands at a time of a global pandemic. In an effort to stave off economic collapse as a result of the health crisis, industrialized countries worldwide have not shied away from taking on more debt. Together with aggressive monetary policy, the willingness of governments to spend more has kept the global economy from facing the collapse that some analysts had projected at the onset of the pandemic. Some governments, however, have decided to shoulder much more debt than others. At the same time, there is a clear divide between Northeast Asian nations and the United States on how the money will be spent, even if the end goal is the same, namely to prevent their economies from collapsing.

Even with no coordinated fiscal policy coordination, there is a consensus among all major countries that they will need to spend their way out of the crisis...

When it comes to stimulus spending in terms of GDP, Japan has by far committed the most, preparing to allocate over 21 percent of its GDP to the tune of 117.1 trillion yen to fight against the fallout of the economic slowdown resulting from the coronavirus. South Korea, meanwhile, is committing 14 percent of its GDP for corona recovery stimulus, while Taiwan will be providing 5 percent of its GDP. The United States, meanwhile, will be spending about 12 percent of its GDP to the effort, and China is projected to spend about 4 percent of GDP. Even with no coordinated fiscal policy coordination, there is a consensus among all major countries that they will need to spend their way out of the crisis to deal with the abrupt disruption in both supply, as well as demand, across the globe as a result of the coronavirus.

How the funds are spent, however, differs considerably by country. Tokyo’s focus has been to ensure stability and avoid social disruptions that could result from the pandemic, while in Washington, priority has been given to ensuring continued growth. The differences in approach are particularly stark when it comes to dealing with the issue of unemployment. With the jobless rate in Japan reaching 2.9 percent in June, the number is significantly lower than the U.S. rate of 11 percent during the same month. But as the U.S. unemployment rate has been on a decline since its peak in spring, there are growing concerns that the rate in Japan could double partly as a result of government measures.

The stimulus package may in fact be keeping jobs and business structures that are no longer needed, or not needed as much, post-pandemic.

The Abe administration’s focus has been to protect existing jobs by supporting companies to continue paying their employees, albeit with a pay cut. The policy has not kept freelance workers from being jobless, but it has been a strong incentive for companies to keep their workers on payroll rather than laying them off. This practice, however, could stifle Japan’s competitiveness in the longer term, as it incentivizes companies to continue business as usual before the coronavirus outbreak. The stimulus package may in fact be keeping jobs and business structures that are no longer needed, or not needed as much, post-pandemic.

Of course, in the near term, the low jobless rate has been a decisive factor in maintaining social stability. Coupled with a relatively low infection rate as well as a viral spread that has not hurt any specific income group in particular, the coronavirus has not led to a social crisis in Japan. That certainly is a measure of success for the fiscal stimulus package that has been put together to address the health crisis. Still, it’s worth bearing in mind that the IMF’s projection of GDP recovery for 2021 is based on the assumption that the worst will be over for the global health crisis before the end of this year. A second wave of the infection would not only revise down growth prospects for 2020 but also delay recovery in 2021 and beyond as well. That in turn would mean that countries will have to resort to another round of stimulus spending. For Japan, which has already allocated the equivalent of one-fifth of its GDP to keep its economic engine from stalling, further debt burdens will be particularly difficult to meet in the future. 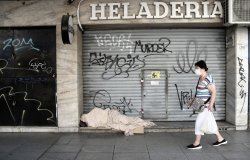 Blog post
Coronavirus
Argentina and Colombia, a Tale of Two Lockdowns
By Avery Dyer on October 2, 2020