A Look Into NATO-Russian Diplomacy During the Clinton Administration: A Conversation with Fellow Stephan Kieninger

By Stephan Kieninger on November 5, 2021

My expertise is in the international history of the Cold War and beyond. My first stay at the Wilson Center was 16 years ago when I was an intern at the Cold War International History Project. At the time, I did research at NARA College Park on the origins of the Helsinki Final Act. That was the beginning for my PhD work. CWIHP’s support was essential in all of this. Now, one and a half decades later, my work has shifted chronologically to the post-Cold War era.

My project looks into the Clinton Administration’s NATO-Russia diplomacy. It scrutinizes the origins of today’s hostility in U.S.-Russia relations examining the mutual misperceptions and misunderstandings in the post-Cold War period. I depict the how and why of NATO enlargement and the establishment of the U.S.-Russia partnership. How did NATO manage to do both at the same time?  How was it possible to maintain the NATO-Russia partnership during the Bosnia and Kosovo Wars? How did NATO manage to include Russia a part of the solution? I am writing a book trying to find some new answers based on newly available archival materials from the U.S., the UK, Germany and NATO. My focus is on the pivotal role that Deputy Secretary of State Strobe Talbott played in all of this as one of the President’s key foreign policy advisers in both Clinton administrations.

Talbott’s key assumption was that Russia was on a successful, yet slow trajectory towards becoming a modern and globally integrated democratic country abandoning its imperial past. At the same time, Talbott was not Russocentric. The Clinton Administration had to reassure Russia’s neighbors emphasizing that American would protect them from any new nationalism in Moscow. Speaking fluent Russian, Talbott sat in every Clinton-Yeltsin meeting managing the Bill-and Boris relationship. Talbott was both a key participant and an astute observer. A former journalist and Time Magazine’s principal correspondent on U.S.-Soviet relations, Talbott had an immense capacity for analysis and meticulous writing. Beyond his expertise as a foremost Russia scholar, Talbott had direct access to the President: He and Bill Clinton had been friends since the early 1970s when both had been Rhodes Scholars and housemates at Oxford University.

I had long been thinking about expanding my research beyond the Cold War, and I became interested three years ago during my time as a fellow at Johns Hopkins SAIS where I participated in a book workshop on NATO enlargement with former policymakers from the U.S. and Europe including key actors from Russia and Central and Eastern Europe. I had a chance to talk with Strobe Talbott and many of his colleagues. Moreover, I had the opportunity to interview former German Defense Minister Volker Rühe, one of the key advocates of NATO enlargement. At the time, new U.S. archival materials became increasingly accessible online at the Clinton Library as well as the State Department’s Reading Room.

It's time to understand historically how the post-Cold War stalemate between the United States and Russia evolved. Three decades after the end of the Cold War, we are again in a tense confrontation. Russia’s President Vladimir Putin is a champion of a narrative emphasizing that Russia had allegedly been betrayed, bullied and patronized by the West. When Russia annexed Crimea and started its war in Eastern Ukraine in 2014, Putin emphasized the humiliation Russia had suffered in the face of broken promises by the West, including the alleged promise not to enlarge NATO beyond the borders of a reunited Germany. For more than twenty years, the narrative of the “broken promise” has been a trademark of Russia’s post-Soviet identity.

My book tells a different story depicting NATO’s constant efforts for Russia’s inclusion in the formation of the post-Cold War order – yet short of NATO membership and without a veto in terms of NATO enlargement. The West supported Russia’s reform with unprecedented amounts of funds and political good will. Clinton made his relationship with Yeltsin a priority launching large-scale financial assistance and lobbying for Russia’s participation in the World Economic Summit meetings.

Clinton did not rush NATO enlargement. Established in 1994, NATO’s Partnership for Peace Program put enlargement at the end, rather than the beginning, of a long-term process. Moreover, in December 1996, NATO announced that its political enlargement would not be accompanied by a military policy. As a way to address Russian concerns, NATO announced that it had no intention, no reason and no plans for the deployment of nuclear weapons on the territory of its newest members. In addition, NATO refrained from deploying permanent foreign combat forces in Central and East Europe.

Last but not least, the Clinton Administration played a key role in the denuclearization of Ukraine, Belarus and Kazakhstan so that Russia was the Soviet Union’s sole nuclear successor state. In parallel to NATO enlargement, the Alliance built a strategic partnership with Russia culminating in the 1997 Founding Act on Mutual Relations, Cooperation and Security. Moreover, NATO and Russia cooperated in the military field in Bosnia-Hercegovina and Kosovo – and the Russian military established a communication channel between NATO headquarters and the General Staff of the Russian Armed Forces as part of the Stabilization Force in Bosnia-Hercegovina (SFOR).

It’s that COVID-19 has closed the archives. While I’m glad that an unprecedented amount of materials are available online I’d love to pursue some more archival research. My work greatly benefits from archival digitalization and the availability of sources at the Clinton Presidential Library and the State Department’s Electronic Reading Room. At the same time, it’s sad to see that the National Archives at College Park are still closed due to high COVID infection rates. My concern is that this will further slow down the declassification and the release of materials over the long term. I wish NARA could have more funding and more attention from U.S. policymakers.

Simply put, for more people to see that history is continuous. There is no end of history. The post-Cold War issues still have a profound and lasting impact. It’s important to take this into account. It helps us to obtain a better understanding of the current setbacks in the struggle for a peaceful and liberal international order. 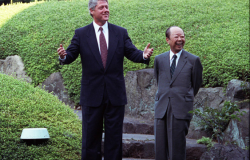