No. 12 | Is Antarctic Diplomacy in Peril?

Evan T. Bloom, a Senior Fellow at the Wilson Center, was a senior U.S. career diplomat and former U.S. Commissioner to CCAMLR and Head of the U.S. Delegation to the Antarctic Treaty Consultative Meetings from 2006-20.

The October 2021 annual meeting of the Commission for the Conservation of Antarctic Marine Living Resources (CCAMLR), one of the two main bodies making up the Antarctic Treaty System, was a major disappointment for many participants and those watching from the sidelines.  There was a distressing lack of progress on establishing new marine protected areas, as well as considerable discord on approaches to fisheries management and compliance.

This leads many to wonder if the Treaty System is meeting the needs of the international community at a time when climate change has caused much of the world to focus increased attention on the poles.  Antarctica and the Southern Ocean continue to present the types of security and environmental issues that they have for decades (e.g, Great Power frictions, worries about human impacts on nature), but there is added urgency in light of the climate crisis to incorporate the region into broader international efforts related to ocean conservation.

In each case, it is important to appreciate that decisions in both bodies are taken by consensus – meaning that if any party with a decision-making role (so called “Consultative Parties” at the ATCM or Members of the CAMLR Commission) speaks up against a proposed action, it fails.  This can place practical limits on what these meetings get done, given the need to placate all states.  But the international community must consider not just what is reasonable to achieve in light of this decision-making rule, but what needs to be accomplished to advance what is most important for Antarctica and Antarctic stakeholders, in particular creating conditions conducive to maintaining peace and security, promoting science and protecting the environment.

The annual ATCM plays a key policymaking role for issues under the Antarctic Treaty and its Environmental Protocol, which include ensuring smooth cooperation between states that claim territory in Antarctica and those that don’t; that the provisions of the Treaty that prevent militarization are working as they should, and that environmental rules are implemented or expanded as necessary.  The meetings provide an opportunity to demonstrate fealty to overarching principles, including support for the science undertaken at research stations operated by the parties.  Thus, the recent declaration of the parties issued at the ATCM in June hosted by France usefully contains a clear indication of continuing support for the existing ban on mining in Antarctica – thus setting a marker that all parties acknowledge this core element of Antarctic policy (although in substance the Paris Declaration isn’t greatly different from similar documents issued by ATCMs in Washington, Buenos Aires and Prague in recent years, including with respect to the mining issue).

The Paris ATCM, working on-line this year because of the pandemic, covered the usual topics: tourism issues, receiving the report of the Committee for Environmental Protection, handling administrative and budgetary issues, as well as a few new ones such as cooperation in Antarctic in the context of the COVID-19 pandemic.  With the United States under a new Administration rejoining the rest of the world in recognizing the importance of dealing with climate change, it was possible to reach consensus on some largely rhetorical references to that issue.  Even though the results at ATCMs may not always break a lot of new ground, the meetings serve a valuable and longstanding goal of creating conditions for peaceful coexistence among countries with disparate regional and global objectives.

By contrast to ATCMs, CCAMLR sessions – the last of which was held on-line in October this year – tend to be characterized by hard negotiations.  Countries that participate in Southern Ocean fisheries have economic skin in the game and need to answer to domestic fishing constituencies.  The balance between sustainability and profit is often hard to achieve, both within delegations and among states.

CCAMLR, because of its broad conservation mandate, traditionally does not consider itself a “regional fisheries management organization” (RFMO).  Yet many countries increasingly approach fisheries management in CCAMLR much as they do in RFMOs worldwide, with the views of fisheries agency officials seeming to have the upper hand in the positions they take.  (U.S. companies haven’t fished in the Southern Ocean in many years, allowing the U.S. delegation to focus at the Commission largely on science and conservation.)

But fisheries management isn’t the entire story.  The main political issue at CCAMLR (and really the most potent issue in current Antarctic policy overall) has become whether and how CCAMLR will establish a network of marine protected areas (MPAs).  In 2016, the organization approved the world’s largest marine protected area in Antarctica’s Ross Sea – based on a joint proposal by the United States and New Zealand.  That, plus the previous establishment of an MPA in the area of the South Orkney Islands, put CCAMLR in the lead for global marine conservation efforts.

Since then, however, Russia and China have backed away from the MPA enterprise, throwing up roadblocks to implementation of the exiting MPAs and preventing forward progress on the three major proposals for new ones advanced by a host of proponent states.  Despite very high-level engagement (the likes of President Macron, Chancellor Merkel, Prince Albert II, and G7 and G20 leaders through their joint communiques have expressed support), progress on the MPAs has stalled.  Indeed, the hostility to the MPA enterprise from these two countries is palpable.  This has led to considerable frustration among many Members, civil society, and the science community.

This year saw not only the usual rancor in the Commission’s compliance committee, but serious levels of disagreement within the Commission’s Scientific Committee and related bodies, as well as efforts to limit their duration and efficiency.  In addition, at this session Russia took the unusual and perhaps unprecedented step of vetoing fishing for toothfish near South Georgia, in a pointed rebuke of the United Kingdom.  It appeared to be the first time in the history of CCAMLR that fishing was prevented in an existing fishery on the basis of this sort of demand by a single member.  Although Russia claims that the closure was needed to protect toothfish stocks, that rationale wasn’t accepted by others and its position seemed politically-based.  When a party uses its veto in such circumstances it creates dangers for the institution, as other delegations may be tempted in the future to cast vetoes rather than negotiate in good faith.

As the blockade on further MPAs stretches into many years, questions arise as to what can and should be done.  Certainly, intersessional efforts to convince the Chinese leadership and the Kremlin to revive their support for Southern Ocean MPAs will continue.  There is little sign that conditions will improve anytime soon.

Does that mean that the consensus rule should be reconsidered?  I doubt that the leading countries in CCAMLR would find that palatable, given that they take comfort that this rule allows them to protect their economic and security interests.  However, if states find themselves thwarted in their ability to take necessary steps for Antarctic governance because of what they believe are unreasonable positions of others and the very strong desire to move forward on marine conservation is thwarted for years to come, pressure may build to revisit foundational rules that have so far stood the test of time.

With respect to the objective of establishing MPAs in the Southern Ocean, the states active in Antarctic diplomacy should bear in mind that CCAMLR (which they control) is not the only game in town.  At the United Nations (UN), a high seas treaty is under negotiation that would have the authority to establish MPAs in areas beyond national jurisdiction[1].  Although many parties at the UN suggest that a regional body like CCAMLR could still, consistent with the new treaty, take the lead on MPAs within its area of jurisdiction, there is also considerable support at the UN for giving the new treaty body the ability to act if a regional body fails to do so.  The details are unclear at this point, but if CCAMLR perpetually fails to advance MPAs (because certain parties block consensus year after year), it may give impetus to a movement to allow the UN to act in CCAMLR’s stead.  In that event, it is possible that CCAMLR might lose its current sole authority over Southern Ocean MPAs.

In sum, while a rethinking of the consensus rule is not currently required, CCAMLR Members need to consider how best to get back on track, recognizing that cooperation in Antarctic governance is central to the success of the Antarctic Treaty System.  They need to chart a course for removing obstacles to establishing a network of marine protected areas and reinforcing science-based decision-making for fisheries management.

[1] Intergovernmental conference on an international legally binding instrument under the United Nations Convention on the Law of the Sea on the conservation and sustainable use of marine biological diversity of areas beyond national jurisdiction, UN General Assembly Resolution 72/249, 24 December 2017. 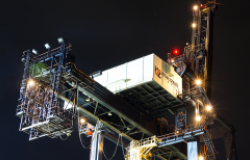