Performance and Power from Kabuki to Go Go

The stories of kabuki and Go Go have many similarities. Emerging during periods of profound economic change, these art forms were products of the social vacuum left by conflicts over power. They expressed the frustrations and struggles of social groups that were on the losing end of those skirmishes; and they did so in ways that were unvarnished and potent. Their practitioners meant to offend; and they did. Their challenge of public sex and drug-tinged violence was real. The difficulty, however, is that sex, drug use, and violence were not limited to kabuki and Go Go players alone. Those with power managed to tar these emerging performance genres with the broadest of brushstrokes. Authorities presented themselves as preserving public safety and virtue by insuring that such in-your-face forms of cultural expression were removed from view.

Just eight years after establishing a powerful military regime that would last 26 decades, Shogun Tokugawa Ieyasu became so disturbed by a troupe of itinerate actors that he expelled them from his Suruga military base.  The group performed in a popular new style known as “kabuki.” To critical observers such as Ieyasu and his coterie of military strong-men, kabuki dancing consisted of women of ill-repute showing themselves off to potential customers.  While an overly simplistic characterization, early kabuki performance seemed to many to be primarily about selling sex. Ieyasu himself became increasingly disturbed by the general drunkenness, insubordination and licentiousness that accompanied kabuki performances.  Shortly after expelling the actors from Suruga, Ieyasu became enraged when courtesans and courtiers associated with his household caroused and publically engaged in sex acts while strolling around Edo (now Tokyo).  The miscreants paid a heavy price – execution and banishment.  Such scandals continued until imperial authorities lost patience and banned women from performing on the kabuki stage altogether in 1629.  They would not be allowed back on the stage until 1877.

Young boys took up where the women had been forced to stop.  They created a new type of actor -- males who specialized in female roles, distinguishing a new “young men’s kabuki” from anything that had come before.  Kabuki audiences continued to grow, especially among the increasingly prosperous townspeople of Osaka and the young samurai in Edo. Authorities came to see Kabuki performances as threatening the public order, with homoerotic suggestiveness replacing heterosexual lasciviousness.  Officials banned the new art form yet again in 1652 after two samurai fought publicly over the favor of one of the boy actors.  While Shogunal authorities gave in and lifted the ban the following year, they restricted theaters to only a few areas in Edo, Kyoto, and in Osaka where they remain today.

Such periodic outbursts of regulation – both petty and expansive -- reflected general discomfort with an art form that represented the evolving social norms and values of a class – townspeople who were not seen as honorable by the aristocrats and military men who ran Tokugawa Japan.  Authorities tried to regulate who would perform, and where; to determine appropriate dress and make-up; to prohibit private passages which led directly from theaters to adjoining tea houses and other places of assignation; and, to censor dialogue fraught with indecency as well as even more explicit movements on stage. 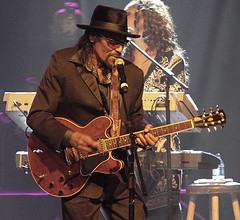 Fortunately, contemporary Washington, D.C. has no authorities with the power of a Tokygawa shogun.  But the tensions between vibrant popular culture bubbling up from a beleaguered social class and authorities claiming to defend public decency are every bit as acute.  During the late 1960s, local musician Chuck Brown created an infectious musical style combining a distinctive Latin-tinged beat with a call-and-response vocal track that came to be known as Go Go.  A sub-genre of funk and a distant cousin of hip-hop, Go Go emerged on Washington’s streets and in its rough and tumble night clubs just as the city was reeling from crushing economic decline, massive civil unrest, and the arrival of crack cocaine.  Go Go quickly became the anthem of D.C.’s African American working class.

For many, the Go Go scene was marked by the same sort of distasteful and offensive behaviors that had so concerned Ieyasu a world and several historical epochs away. Alarmed at the disorder and crime often seen to be associated with Go Go venues, the city’s police carefully tracked performances, working with various licensing authorities to shut down clubs following violent incidences.  Several popular Go Go haunts along the Anacostia River waterfront were demolished to make way for a new baseball stadium for the Washington Nationals which opened in 2010.  There even have been reports that an Advisory Neighborhood Council in Northwest Washington’s rapidly gentrifying Petworth area voted to recommend that the Liquor Control Board grant a liquor license provided the club in question not allow Go Go to be performed.  Such a provision would be particularly ironic as the Petworth neighborhood had been home to an especially vibrant Go Go scene just a few years before.

The stories of kabuki and Go Go have other similarities.  Emerging during periods of profound economic change, these art forms were products of the social vacuum left by conflicts over power. They expressed the frustrations and struggles of social groups that were on the losing end of those skirmishes; and they did so in ways that were unvarnished and potent. Their practitioners meant to offend; and they did. Their challenge of public sex and drug-tinged violence was real.  The difficulty, however, is that sex, drug use, and violence were not limited to kabuki and Go Go players alone.  Those with power managed to tar these emerging performance genres with the broadest of brushstrokes. Authorities presented themselves as preserving public safety and virtue by insuring that such in-your-face forms of cultural expression were removed from view.

Kabuki, of course, survived to the point that it became frozen in the amber of having been declared a “national treasure.”  Kabuki theater has recently been re-invigorated by a new generation of performers intent of re-asserting some of the genre’s original edgy spirit.  Go Go is far too new to know if it will endure or not.  Like many American musical forms – such as jazz, bluegrass, opera, and chamber music – critics are certain to write its obituary long before its actual death. Nonetheless, Go Go will live; just as kabuki endured the authoritarian Tokugawa Shogunate.  It will find fertile ground for renewal; as it has already done, pushing out of D.C. to Prince George’s County, Maryland; and beyond.

The advent of both kabuki and Go Go amplify a broader point.  Struggles over new urban cultural forms – which often play out through conflict over public propriety and safety – are often more about outsiders using the arts as a way of forcing themselves inside.  As already noted kabuki would become accepted as one of Japan’s most distinctive and valued national art forms. Chuck Brown – the “Godfather of Go Go” -- similarly has become treasured.  In August 2014, the D.C. government dedicated a monument, amphitheater and memorial park honoring Brown in Northeast D.C.’s Langdon Park.  Bodies swaying to a kabuki narrator’s rhythmic chants or a Go Go beat, it seems, outlast politicians asserting control through their own notions of respectability.

The views expressed by the author are his, and are not endorsed either by the Wilson Center or by the any of the Center’s constituent programs.

Blair A. Ruble is Wilson Center Vice President and Director of the Center’s Urban Sustainability Lab.  This article was inspired by a panel discussion entitled: “Chocolate City No More: Changing Demographics and Gentrification in Washington, D.C.” held at the Smithsonian Anacostia Community Museum and Wilson Center Conference “Revisiting Our Black Mosaic” convened at the Wilson Center on September 19, 2014.  Panel members included: Natalie Hopkinson, author of Go-Go Live: The Musical Life and Death of a Chocolate City;  Derek Hyra, author of The New Urban Renewal: The Economic Transformation of Harlem and Bronzeville;  Sabiyha Price, author of African Americans and Gentrification in Washington, D.C.; and, Blair Ruble, author of Washington’s U Street. A Biography.