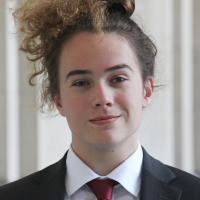 In September of this year, a semitrailer driver lost control of his vehicle and collided with five passenger vehicles in the early morning along BR-101 in the Brazilian state of Recife. Though no one was seriously hurt in this case, the accident highlighted the poor condition of the highway, already responsible for hundreds of deaths. In fact just two roads, BR-101 and BR-116, the site of more than 24 percent of fatalities from vehicle accidents in 2017. Little improvement has been made since then, and accidents like these have demonstrated the poor quality of the country’s federal road network, which the National Transport Confederation (Confederação Nacional do Transporte, CNT) has linked directly to a number of accidents.

Brazil currently stands as the fourth most dangerous country in the world for drivers due to a combination of poor road standards and haphazard driving. According to the Federal Medicine Counsel (Conselho Federal de Medicina, CFM), five persons are killed in traffic accidents every hour, with more than 1.6 million injuries in the last decade. More than 20 percent of hospital admissions in 2018 were related to road injuries—compared to 8.1 percent in the United States[1]—costing the Public Health Service (Sistema Único de Saúde, SUS) almost R$3 billion ($725 million). Simply put, Brazil’s interstates are in a state of catastrophe.

The Problem as It Stands

“Brazil’s transit is in a state of pandemonium,” Venilton Tadini, President of the Brazilian Association of Infrastructure and Basic Industry (ABDIB), stated in an interview late last year with Estado de Minas. “It is difficult to maintain the quality of the highways here, principally because most of them are not even paved.” Boasting a network of more than 1.7 million kilometers (1.06 million miles) of federal roads, the fourth largest system in the world behind the United States, China, and India, Brazil relies on its highways and backroads to transport 90 percent of its ton-mile cargo nationally, using rail for less than a tenth; in comparison, the United States relies on trucks for 28.6 percent of its ton-mile freight. Under these metrics, 1.064 billion tons of goods are transported per kilometer annually along Brazilian interstates. Furthermore, 90 percent of personal inter-city travel is completed by cars or buses. 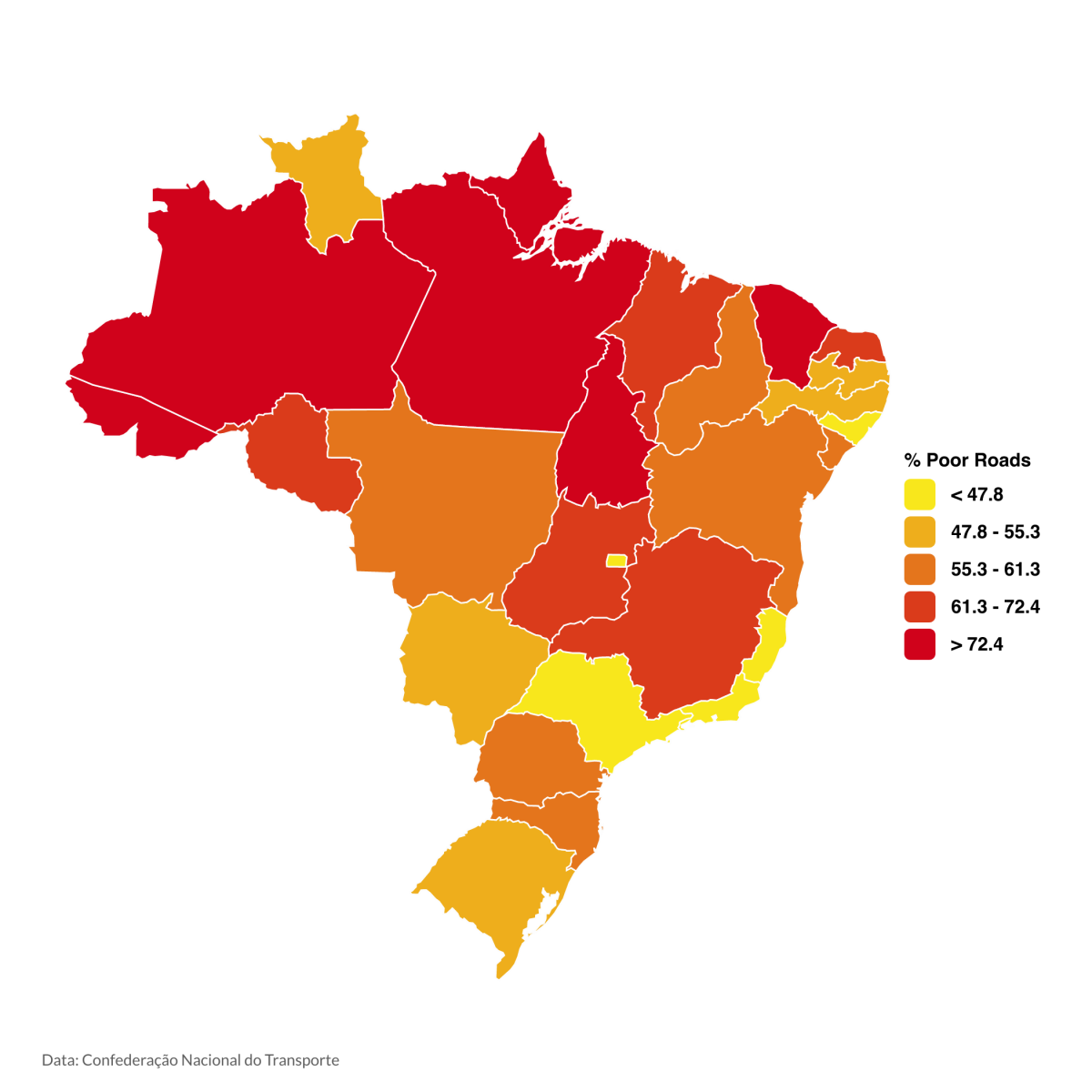 Yet, according to the annual CNT Report—a survey of 107,161 kilometers of highway—only two-fifths of Brazil’s federal roads are serviceable. State roads fare worse, with less than three in ten evaluated “good” or “great.” In total, 65.8 percent of public Brazilian roads were found to be unsatisfactory in 2018, representing 87,563 kilometers of roadways gauged. In Amazonas, less than 1 percent were found to be sufficiently maintained—just ten kilometers statewide.

Globally, Brazil has an especially weak showing. According to the World Economic Forum, the Americas play host to some of the best roads in the world, with the United States (ranked 10 on the list), Canada (22), Chile (24), and Ecuador (31) leading; whereas Brazil (103) placed between Mongolia (102) and the Philippines (104). Lack of paving, poor signaling, meagre maintenance, and excessive activity have eroded many of Brazil’s public highways, which are often underfunded annually and unsuited for the amount of wear generated by millions of cars, trucks, and buses daily. In the last decade, paving efforts have only expanded by 8.4 percent, while the number of vehicles on Brazil’s roadways has grown ten times as fast, from 54.5 million in 2008 to 99.4 million in 2018 (82.4 percent). As noted by the CNT, this growth, combined with the poor quality, density, and maintenance of the nation’s highways, could be responsible in some part for hamstringing growth in the country’s rural areas. Poor infrastructure is also likely responsible for a significant portion of Brazil’s 90,000 traffic accidents between 2007 and 2017, per CNT, due to poor signage, pavement, and general structure. Accidents cost the federal government R$10.77 billion ($2.63 billion)—35 percent more than the budget for national transportation infrastructure (R$7.98 billion, or $1.95 billion).

Changing the Game in São Paulo

São Paulo, in stark contrast, may have found an antidote to the bedlam. Seventy-eight percent of São Paulo’s highways were found to be of superior quality, with 54.7 percent rated “great” by the Confederation. The state is unique in the modernity and effectivity of its highway network, compared even to Brazil’s other wealthy states such as Santa Catarina, Paraná, or Rio Grande do Sul, due to one reason: more than 65 percent of São Paulo’s highways are privately owned and maintained. Each of the ten best-rated highways in Brazil can be found in São Paulo—topped by the SP-310/BR-364—and are privately sponsored by infrastructure firms. Meanwhile, the report’s worst performers, spread across Goiás, Pará, Alagoas, Bahia, Acre, Tocantins, the Federal District, and Minas Gerais, were universally funded by the federal government.

Comparing private and public highways more generally, 81.9 percent of privately funded highways were rated “good” by the CNT, opposed to 34.2 percent of public roadways. Only 0.1 percent of privately-owned roads were evaluated to be “terrible” in 2018. Beyond this, federal roads have been demonstrated to be more dangerous for drivers, with an accident rate of 12.2 accidents per 10km as opposed to 8.7 per 10km on privatized roads nationally.

The history of São Paulo’s private interstates dates back to 1998, when guidelines for conceding roadways were established on a statewide basis, while federal sales were outlawed. Completed under the Mario Covas (PSDB-SP) government, these concessions raised over R$77.5 billion ($18.98 billion) to combat São Paulo’s ballooning debt, then R$105 billion ($25.71 billion). Since then, the state of São Paulo has sold over 7,200km to private retainers. The state sees 12 percent fewer accidents than the national average, 18 percent fewer traffic-related deaths, and 21 percent fewer injuries. Today, with a state budget of only R$230 billion ($56.21 billion), São Paulo’s Governor João Doria (PSDB-SP) has adopted a “privatize everything possible” strategy to fill budgeting gaps in overtaxed departments including health, education, security, and—especially—transit. In a February interview with ISTOÉ, São Paulo Finance Minister Henrique Meirelles affirmed that the state “will privatize everything that we can…we know that the government does not have the resources to cover the deficit. As a result, it is absolutely necessary to seek investment.”

In July, the 1,273km Piracicaba-Panorama Highway, which connects 62 cities in São Paulo, was sold for R$14 billion ($3.42 billion). Governor Doria has also campaigned actively for overseas investors to fund new infrastructure projects in São Paulo, most recently inaugurating an investment office in Shanghai and unveiling a R$40 billion ($9.78 billion) Public-Private Partnership (PPP) in London to address rail, air, and road infrastructure. The combination of lump-sum cash transfers and handover of upkeep costs have proven to be essential for thoroughfare maintenance.

With São Paulo’s demonstrable success, other states are beginning to take note. Seeing the successful auctioning of roads in São Paulo, and to a lesser extent in Rio de Janeiro, more Brazilian states are embracing a private sponsorship model for their major roadways and public services at large. Governor Ratinho Junior (PSD-PR) of Paraná unveiled a R$40 billion ($9.78 billion) PPP strategy in March, expected to generate more than 500,000 new jobs in the state by 2021 and address deficiencies in the state’s industry, infrastructure, and public services. Eduardo Leite (PSDB-RS), governor of Rio Grande do Sul, offered five state highways to private sponsors in June. That same month, the federal government, under President Jair Bolsonaro announced plans to transfer more than 16,000 kilometers of highway to private ownership. This initiative will see modernization efforts on the BR-116 (Rodovia Presidente Dutra)—perhaps the most traveled interstate in the country, it links São Paulo and Rio de Janeiro—auctioned to private investors in both states. Renovation is expected to begin in 2021, stretching the distance from Rio de Janeiro to Ubatuba, with plans to eventually include BR101 (Rio-Santos). Tarcísio Gomes de Freitas, Brazil’s Minister of Infrastructure, affirmed the government’s proposal, “We will have Rio’s pavement practically all conceded, all in the hands of the private sector.” Minister Gomes de Freitas also stated that procedures for privatizing BR-163, BR-230, BR-381, BR-262, BR-364, and BR-365 were underway. These efforts would revitalize primary connections between five states (Mato Grosso, Pará, Minas Gerais, Espírito Santo, and Goiás). These efforts are only expected to expand in the near future.

Only recently emerging from recession, the federal government currently has inadequate resources to maintain the massive network of roads and highways in Brazil. With an insufficient budget and ineffective implementation, the principal form of national transit has suffered immensely. In contrast, conceded roadways have demonstrated superior performance, fewer accidents, and lower costs of upkeep. “We have no doubts, the public needs to recognize the importance of private initiatives and call upon investors to be pioneers in this field,” stated CNT President Clésio Andrade. “There is unquestionable viability to these private investments…they should always be prioritized.”

Brazil’s current infrastructure budget, which addresses rail, air, waterways, metros, and interstates, is presently valued at less than R$10 billion ($2.44 billion)—a far cry from the estimated R$500 billion ($122.2 billion) needed to repair the highway network, let alone modernize it. The participation of the private sector in this effort is therefore invaluable. As São Paulo has demonstrated, private sponsorships of roadways can ensure better maintenance and improve performance, while limiting traffic-related accidents and deaths.